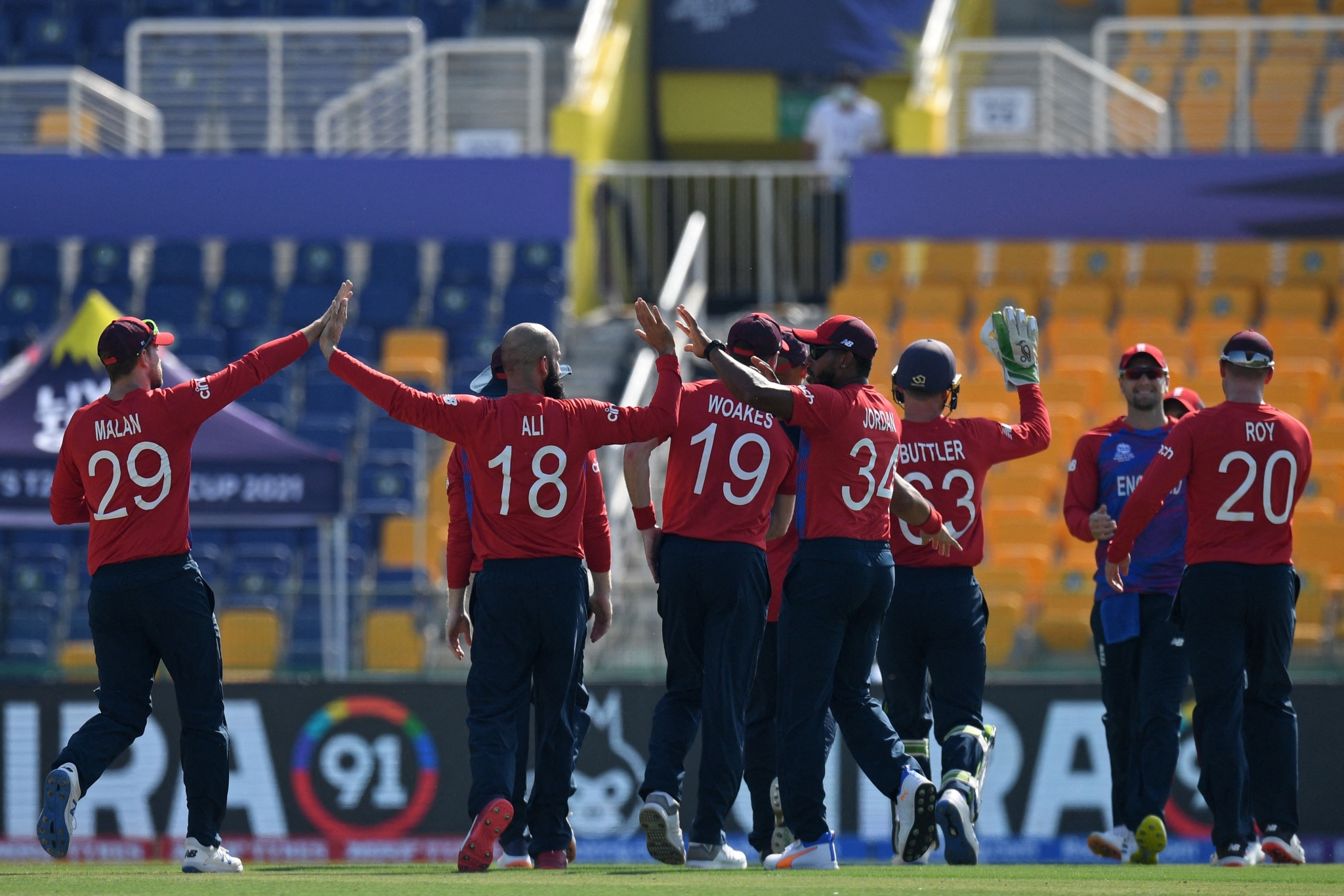 England celebrate the fall of a wicket during the T20 World Cup. | Photo: Twitter/T20WorldCup

A rampaging England are expected to brush aside a struggling Sri Lanka and seal a spot in the semifinals when the two teams meet in a Group 1 match of the T20 World Cup in Sharjah on Monday.

Pre-tournament favourites England have played as per the expectations in their first three games, steamrolling their opponents, including arch-rivals Australia on Saturday night.

The Eoin Morgan-led side, which is heavily driven by data and match-ups, seem to have all bases covered and back up plans in place even though they have not needed one yet.

England have sent out a loud statement to all the other teams with an eight-wicket rout of Australia, who too were looking a strong unit until their frailties were exposed.

Jos Buttler was simply unstoppable against Australia and that is another big positive for England going into the knockout phase. Their big margin of victory in all three games has meant that their middle-order has not been tested but Morgan is confident they will deliver when the times comes.

He opened the bowling with Adil Rashid on Saturday and not Moeen Ali, considering Aaron Finch's struggles against the leggie. Moeen did not need to bowl at all.

Pacer Chris Woakes was brilliant with the new ball and Chris Jordan too came to the party with triple strikes. Death overs specialist Tymal Mills was a tad expensive against Australia but he has been able to pick wickets throughout the tournament.

Part time spinner Liam Livingstone too has done a good job for the team, providing Morgan another valuable bowling resource.

Sri Lanka will have to produce something special to halt England's juggernaut at Sharjah.

Considering their inexperience, Sri Lanka have not played too badly and the final over finish against South Africa could have gone either way. Unfortunately for them, it was their second loss in three games and they must win against England to keep themselves in the competition.

Charith Asalanka has been in sublime form and from Sri Lanka's point of view, it was good to see opener Pathum Nissanka belting the South African attack. If the batters do better, the bowlers showed on Saturday afternoon that they are capable of defending decent totals.

The bowlers did well to keep Sri Lanka in the game for the major part of the innings until they were undone by David Miller's six-hitting prowess in the 20th over.

Barring the Bangladesh-Sri Lanka game, the pitch here has not been great for batting and batter Bhanuka Rajapaksa expects the trend to continue.

"Yeah, we knew when we came to Sharjah, we knew that from the past few games Sharjah was not that great to bat except for the game that we played against Bangladesh that was a very true wicket."

"Hats off to Pathum Nissanka for holding on the inning as batting was not up to standard, but the wicket wasn't helping the batsmen, as well," he said referring to Nissanka's 72 against the Proteas.