While Dwayne Bravo played his final international match, indications were that it was Chris Gayle's last in West Indies colours
S. Sudarshanan 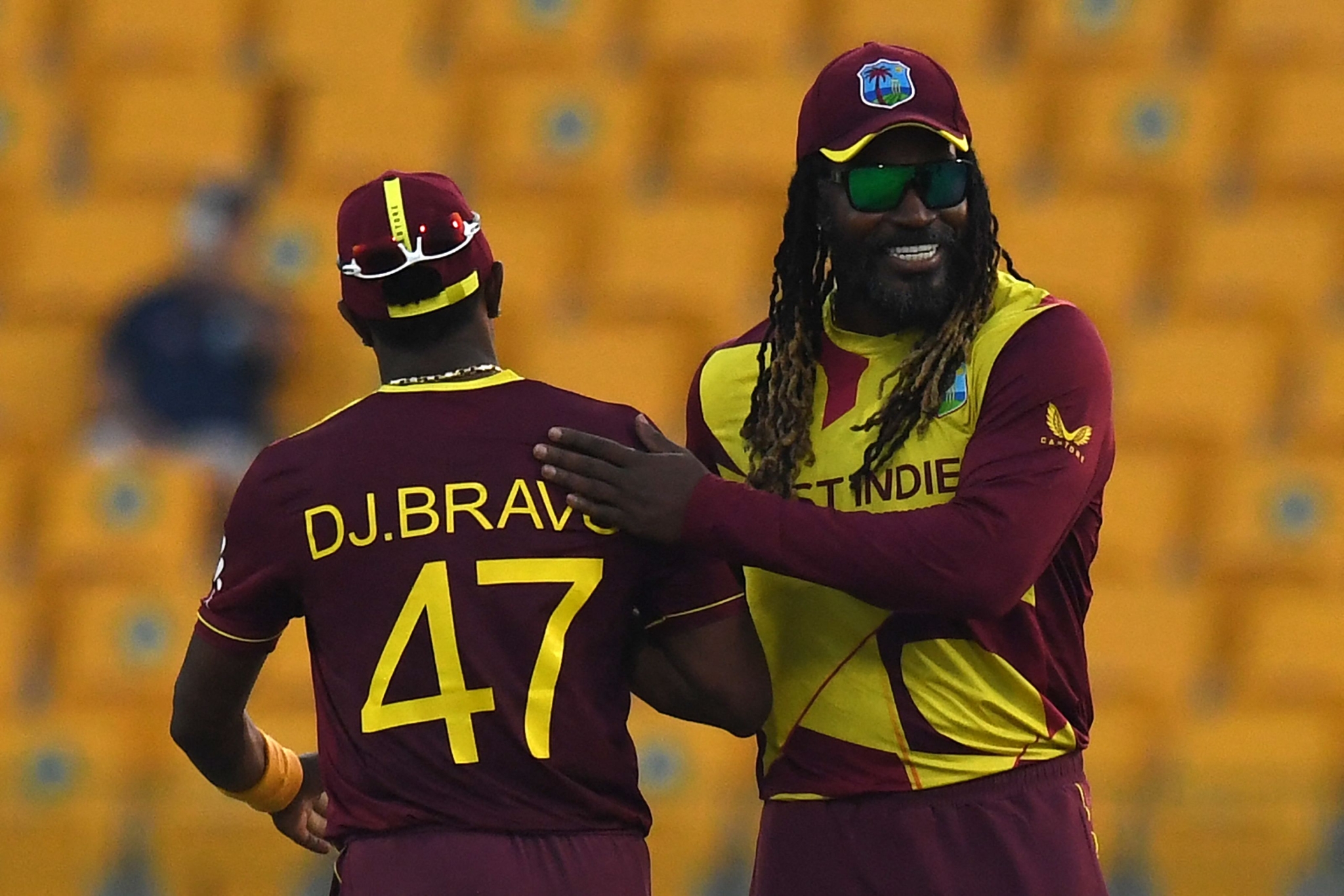 What would world cricket be without West Indies!

Their match against Australia on Saturday was more than just playing party-spoilers. Whether they made the Super 12 of the T20 World Cup 2022 directly depended on the contest in Abu Dhabi. West Indies’ eight-wicket loss means that they will have to play round one next year, because they have slipped to ninth in the ICC T20I rankings and the cut-off date is November 15.

And yet there was Chris Gayle walking out to bat, after they were put in, with a reflector glasses. Not for the first time by anybody, let alone a West Indian. And perhaps not for the last time either.

The ‘Universe Boss’ as he likes to call himself, is 42. He’s not getting any younger; the reflexes aren’t getting any sharper. Scores of 13, 12, 4 and 1 in this campaign don’t inspire confidence, either. But Gayle’s determination was seen from the get go, when he ran a couple and then a quick single off the first two balls of the match.

The left-handed opener then threatened to tee off in vintage style when he slammed two humongous sixes. First, a Josh Hazlewood length ball was hit over deep mid-wicket before a power strike made a Pat Cummins length ball sail over long on.

Was Gayle in goggles seeing the ball better than Gayle without goggles? Why did he not wear those in the first four matches?

However, true to his ‘six and out’ fashion, the southpaw chopped one on to his stumps on the very next ball off Cummins to walk back for 15 off nine.

Gayle raised his bat to the crowd as he walked back, almost waved them goodbye, hugged his team-mates, expressed himself like only he can to the camera near the dugout… This was after he received a mini guard of honour outside the boundary line when he walked in to bat. Unlike his team-mate Dwayne Bravo, Gayle hasn’t officially announced his international retirement yet. Were these the signs? 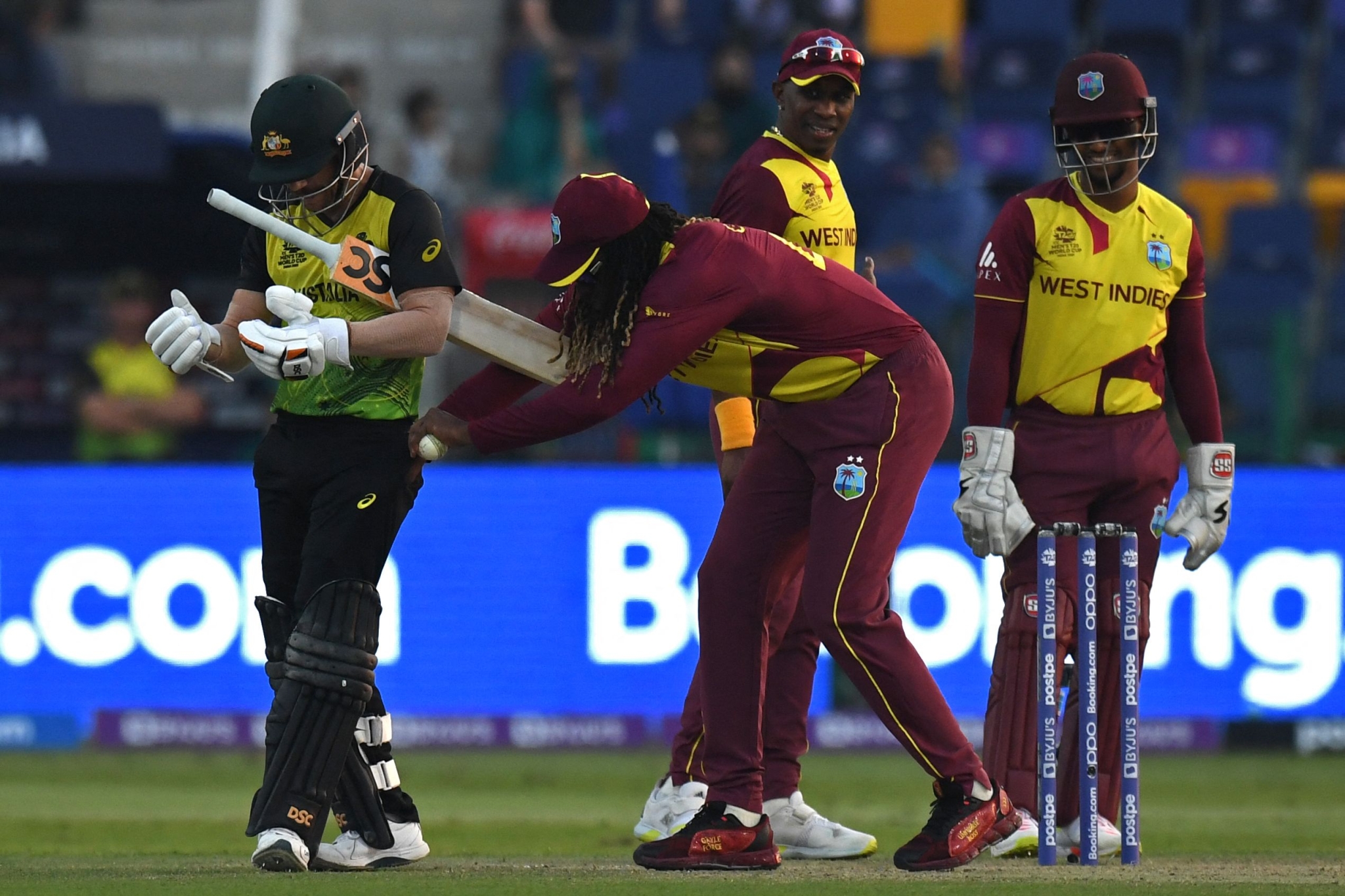 Gayle also had a wicket to show in the over he bowled. He almost got Warner stumped – Nicholas Pooran failed to collect the ball and whip the bails. Gayle ran towards Warner and checked if he was carrying a lottery ticket. But on the final ball, he managed to dismiss Mitchell Marsh to end the 124-run partnership with David Warner.

Much of Gayle’s life is a celebration; so how would he not celebrate what could perhaps be his final international wicket? He ran and hugged Marsh, perhaps thanking the Aussie for helping him have a memorable end, if it is one indeed.

Bravo’s final international outing wasn’t as eventful. He hit his trademark six over extra-cover off Mitchell Starc in his 12-ball 10. With the ball, he bowled four wicket-less overs for 36. He mixed his variations well at the start and was good until he was hit for 14 in his final over.

After the match, both Australia and West Indies gave Gayle and Bravo a guard of honour. Was it out of place in a T20 World Cup match which the Windies lost? Certainly not.

Gayle and Bravo revolutionised the way T20 is played and perhaps revolutionised the celebrations, too. They were part of the two T20 World Cup wins and have an envious record in T20s overall. While Bravo has the most wickets in the format – 553; Sunil Narine is a distant second with 425 – Gayle has the most runs and 22 tons in the format; the next best is eight. Despite being on the twilight of their careers, they still are quite popular in the T20 leagues around the globe.

“It's the end of a generation/era where you have some guys who have done some good things for T20 cricket, not only in the Caribbean but around the world,” said Kieron Pollard, West Indies captain, after the match.

It is truly the end of an era. But the flair they brought to the West Indies’ game would certainly live on.