With Hardik Pandya’s fitness status largely unknown, the inclusion of Shardul Thakur in the main squad and Venkatesh Iyer in the bio-bubble sends out mixed signals
S. SUDARSHANAN 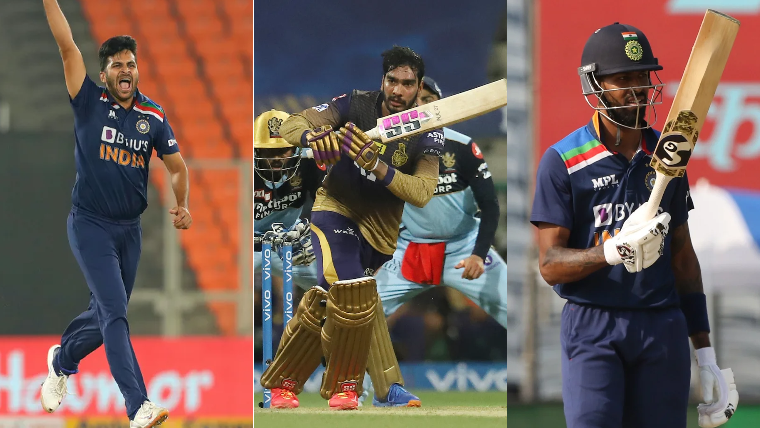 World Cup year – 2019. India had put in some strong performances in the ODIs leading up to the global event that year but weren’t able to solve a puzzle – that of the no.4 slot in the batting order. KL Rahul, MS Dhoni, Virat Kohli, Shreyas Iyer, Vijay Shankar, Ambati Rayudu all were tried at the position and yet India couldn’t cement one of those and that cost them in the World Cup, where they went down to New Zealand in the semi-final.

World Cup year – 2021. The format is different, the conundrums are different but they exist for India as far as the T20 World Cup starting next week is concerned. Shardul Thakur and Axar Patel exchanged spots in the 15-member squad and reserves, as the BCCI announced on Wednesday. Venkatesh Iyer was among those named to “assist” Team India in their preparations. What do these signs mean? Is the ‘All-rounder conundrum’ a sequel to the un-made film ‘The No.4 conundrum’?

Thakur’s promotion to the main squad of 15 says that he is not. Pandya didn’t bowl for the entirety of IPL 2021, for starters. He had a quiet tournament with the bat, returning 127 runs at a strike rate of 113.39. His best of 40 not out was a solace, as he helped Mumbai Indians chase down Punjab Kings’ 135/6 with an over to spare.

SO HARDIK IS NOT FIT TO BOWL BUT FIT TO FINISH?

Seemingly so, though details are unclear. Pandya was assessed on a daily basis by the MI physios, said Rohit Sharma after their last game. He revealed that the all-rounder is getting better day by day and could return to bowling next week, but stopped short of giving an official update. Promising sign, perhaps.

Even if Pandya starts bowling a week before India kick off their campaign, he would be a bit raw given that he last bowled in the first T20I against Sri Lanka in July. With India’s opening fixture to be played against Pakistan, would India want a bowler sans game-time in the XI?

ARE INDIA LOOKING AT THAKUR AS PANDYA’S LIKE-FOR-LIKE?

In the turn of the year, Thakur’s batting has been more talked and raved about than his exploits with the ball. ‘Lord’ Thakur, as he is referred to these days, has three scores over fifty in the six innings he’s batted in Tests. He scored half centuries in both innings of The Oval Test and hit four sixes combined.

In the Qualifier 1, Thakur was sent out to bat at no.4 but fell on the very first ball he faced. MS Dhoni leads Chennai Super Kings and will move into his role as Team India’s mentor for the T20 World Cup. Was that one of the cryptic messages Dhoni tends to send out?

Thakur is CSK’s leading wicket-taker this IPL, picking up 18 wickets, 13 of which have come in the UAE leg. His economy rate in the season has hovered close to nine, but in the second half, he’s given away runs only at 7.40 per over.

BUT THERE IS BHUVNESHWAR KUMAR, RIGHT?

India’s squad for the global event is quite spin-heavy. If only two seamers were to be picked, Jasprit Bumrah and perhaps Mohammed Shami would have been preferred. Moreover, Kumar’s recent batting stint hardly inspire confidence, even though he is still quite reliable with the ball. While the 31-year-old was close to being called a bowling all-rounder at a point, he is far from it currently.

WHY HAS VENKATESH IYER BEEN ADDED TO INDIA’S BIO-BUBBLE?

The UAE leg of IPL 2021 brought Iyer into the limelight, thanks to his aggressive stints at the top of the order for Kolkata Knight Riders. While he struck at just over 120 with the bat, he has also picked three wickets with his seam bowling. Are the selectors looking at Iyer as a potential replacement for Pandya? That would be a bridge too far since Iyer bowled only in three of his nine matches. And a strike rate in the 120s can hardly be termed explosive in the current T20 era.

There are ten days before India play their first game in the competition. But before that, they play warm-up games against England and Australia. Those matches should give some answers to the above queries.