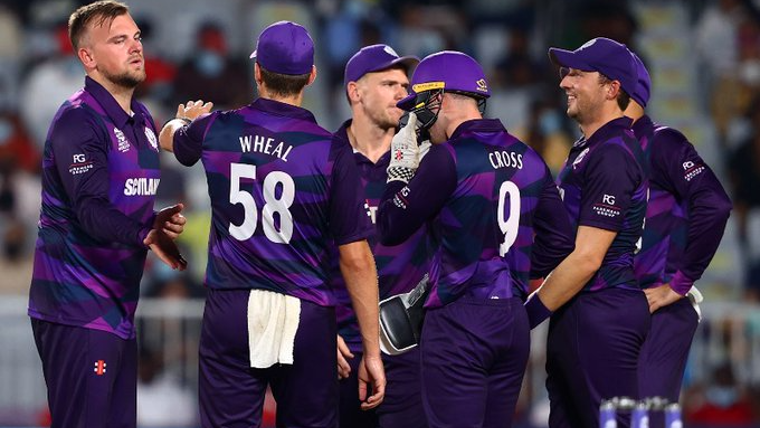 Scotland celebrate the fall of a wicket. | Photo: Twitter/T20WorldCup

Josh Davey's 3/25 and a couple of wickets each from Safyaan Sharif and Michael Leask helped Scotland dismiss Oman for 122 in their Group B T20 World Cup clash at Al Amerat on Thursday.

Barring Aaqib Ilyas (37 off 35 balls) and Zeeshan Maqsood (34 off 30 balls), Oman's batters struggled to score in their home conditions as only two boundaries were scored in the last five overs. They also lost the last six wickets for 29 runs.

Electing to bat first, Oman had a disastrous start as Jatinder Singh was run-out in a big miscommunication with both openers at non-striker's end. Ilyas grounded the bat before Singh came, resulting in a duck for him on the second ball of the innings. Three overs later, Kashyap Prajapati's slog went straight to mid-off off Sharif.

Ilyas showed his prowess with the flicks while taking Sharif, Davey and Mark Watt for boundaries. He was also dropped thrice during his knock of 37 off 35 balls before he holed out to long-off off Leask in the 10th over.

Mohammad Nadeem struck two boundaries before Watt had him hitting straight to cover. Maqsood carried Oman's innings by striking boundaries while surviving a caught dismissal off Chris Greaves as the ball was above waist height. He was waging a lone battle with bat as Sandeep Goud (5), Naseem Khushi (2) and Suraj Kumar (4) fell cheaply. In the final over, Davey took out Maqsood followed by a run-out of Bilal Khan and closed the innings with dismissal of Fayyaz Butt.