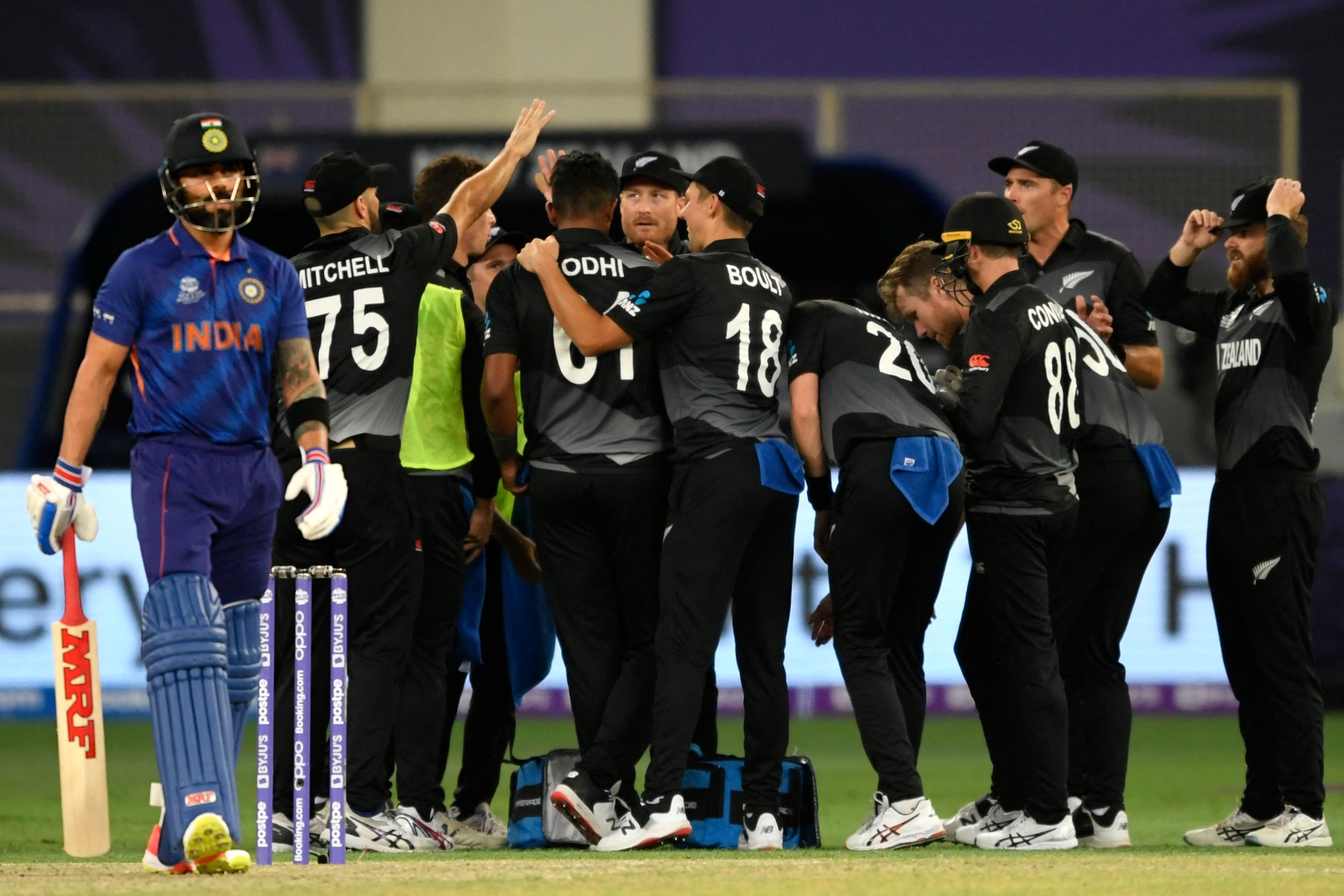 Daryl Mitchell hit 49 off just 35 balls as New Zealand gunned down India's 110/7 with eight wickets and over five overs to spare in their Super 12 clash of the Men's T20 World Cup in Dubai on Sunday. This was after the Kiwi bowlers, led by Trent Boult's three and Ish Sodhi's two helped them restrict India to a paltry score. As a result, New Zealand keep their clean slate against India in T20 World Cups.

New Zealand started the chase confidently, with Martin Guptill hitting Varun Chakravarthy for back-to-back fours after a couple of watchful overs. But Jasprit Bumrah got the better of him with a slower one, which Guptill mistimed to mid-on.

From there on, it was all one way traffic. Kane Williamson yet again showed his love for the nudge towards third man, getting going quite smoothly. Mitchell, at the other end, made full use of the fielding restrictions, hitting Ravindra Jadeja's left-arm spin for a six and two fours. He also smashed Mohammed Shami for another maximum in the next over.

Mitchell's approach moved from being cautious to attacking every ball, irrespective of the ball on offer. He meted out a special treatment to Shardul Thakur, taking 14 off his over and inching towards a half century. However, he fell short by a run. But the damage had been done and Williamson (33 not out) added the finishing touches.

Bumrah was the pick of the bowlers for India with returns of two for 19 in his four overs.

Earlier, put in to bat, Indian openers KL Rahul and Ishan Kishan, picked after Suryakumar Yadav was ruled out due to back spasms, began sedately and struggled with their timing. Rahul first hit a four over a leaping mid-on before Ishan Kishan hammered one through the same region. However, Boult had the last laugh as Kishan's (four) flick found deep backward square leg.

Rohit Sharma, pushed to number three only for the third time in his T20I career, was dropped on the very first ball. Adam Milne, who was brought in for Tim Seifert was the culprit. His first over then cost 15, with Rahul beginning with a four and Sharma finishing it with a four and a six.

However, the experienced Tim Southee bowled a slower bouncer, which Rahul (18) pulled straight to the deep square leg fielder. Spin twins Sodhi and Mitchell Santner then stifled both Sharma and Virat Kohli, before Sharma holed out to long on.

Lack of momentum then forced Kohli to play an uncharacteristic hoick straight to Boult at long-on to depart for nine off 17 balls. It seemed the writing was on the wall as even Rishabh Pant and Hardik Pandya struggled to find the boundary. In fact, India failed to hit a single boundary after the powerplay till over number 17 - the first time it has happened in this T20 World Cup.