T20 World Cup: Bhuvneshwar Kumar or Shardul Thakur - who should be the third seamer for India against New Zealand?

Shardul Thakur has picked at least one wicket in 12 of the last 14 T20Is he's played for India
S. Sudarshanan 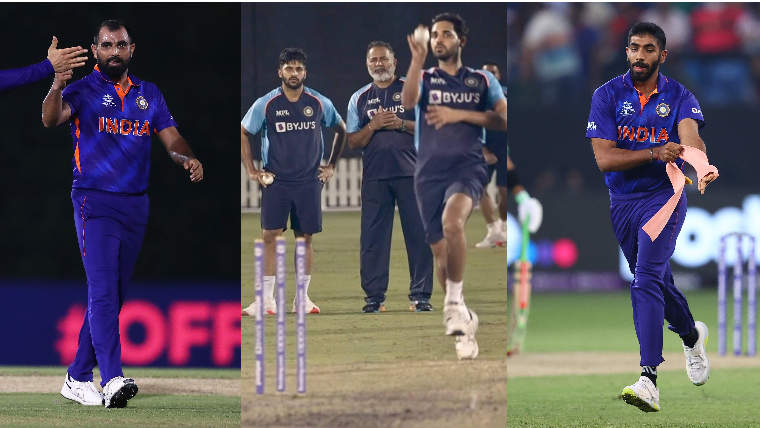 The start to their 151-run defence was not ideal for India in their Men’s T20 World Cup opener against Pakistan. Kumar, Shami and Bumrah were the seamers India went with in their ten-wicket loss against their arch-rivals. With Hardik Pandya not bowling, neither of the seamers could afford to have off days, but all of them did. Even without hindsight as a wonderful friend, it seemed India’s move to go with both Kumar and Shami, with someone like Shardul Thakur waiting in the wings, was fraught with risk and it did backfire.

“He's definitely a guy who's in our plans, constantly making a case of for himself. Shardul is someone who's got great potential and he will add great value to the team,” said India captain Virat Kohli on the eve of their clash against New Zealand, who have never lost to the Asian side in Men’s T20 World Cups. Even across World Cups – 50-overs included – the Kiwis have had an upper hand over India. Can Thakur really make a difference, then, in such a crucial fixture?

For starters, Kumar didn’t have a great IPL 2021, picking just six wickets in 11 games – three wickets in six matches in the UAE. Shami, on the other hand, had 11 wickets to show in the second leg of the IPL – 19 in the season – and has picked 50 wickets in the last three seasons combined.

Thakur? He finished with 21 wickets, fourth overall in IPL 2021, the most for CSK. 16 of those came in the UAE leg, showing how his change of pace and variations are conducive to the conditions in the Emirates, where the T20 World Cup is being held.

Moreover, Thakur played 16 games in IPL 2021 and didn’t pick a wicket in only four of those – three in the first half. From the start of 2020, the right-arm quick has bowled 14 times in T20Is for India and stayed wicketless only twice. If India do need a wicket-taker, then call Thakur, maybe?

However, as seen in the IPL final, Thakur has a tendency to go overboard with his variations and concede runs. But India shouldn’t mind much of that, since their batting has depth to cover for that. As seen against Pakistan, wickets are the need of the hour for which Thakur could be the right choice, perhaps in place of Kumar, who is not the T20 bowler he generally is, in UAE.

Thakur has a number of variations in his repertoire – deceptive pace, scorching bouncers, slower balls, knuckle deliveries… you name it he has it. The slower the seamers bowl in conditions in the UAE, the tougher it is for batters to hit – Haris Rauf’s spell against New Zealand drove home the point. Thakur seems to be the man with the golden arm, if recent records suggest anything.

In the spin department, India had gone with Varun Chakravarthy as Ravindra Jadeja’s partner. Chakravarthy began well in his first two overs, before Mohammad Rizwan and Babar Azam took him apart. The right-arm spinner went for 33 off his four overs. While backing Chakravarthy to come good, India could perhaps think of bringing in Ravichandran Ashwin, who has done quite well against New Zealand.

The Kiwis could have three left-handers in their XI – Devon Conway, James Neesham and Mitchell Santner. Ashwin has 12 wickets in 10 ODIs against the Kiwis and has played just the two T20Is. As a result, bringing in Ashwin for Chakravarthy could be something India could explore, with the former providing more with the bat than Chakravarthy.

While Kohli did suggest that Pandya was fine as far as his shoulder is concerned, the sixth bowling option is a cushion and not a necessity as far as India’s thought process is concerned. Will India stick to the same personnel or change something? Will ‘Lord’ Thakur make an appearance in Dubai on Sunday?