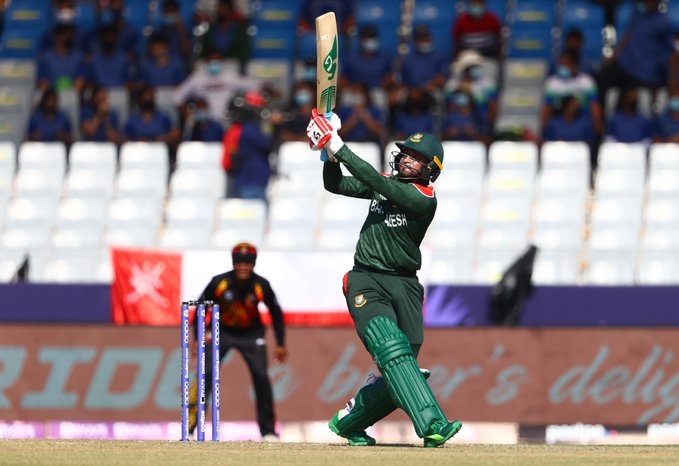 Shakib Al Hasan of Bangladesh hits one over the leg side during the Men's T20 World Cup 2021. | Photo: Twitter/T20WorldCup

Bangladesh all-rounder Shakib Al Hasan has been ruled out of the ongoing T20 World Cup ahead of their match against South Africa.

Sources in the know of developments on Sunday told ANI that Shakib has been ruled out with hamstring injury.

"He has a hamstring injury and while the scan reports will tell you about the grade of injury, he is ruled out of the tournament," the source told ANI.

Bangladesh have played three games in the Super 12 stage and are still searching for a win. Shakib's injury is a major dent in the Asian side's hopes in the showpiece event.

Earlier this week, the Event Technical Committee of the tournament approved Rubel Hossain as a replacement for Mohammad Saifuddin in the Bangladesh squad.

Fast bowler Hossain, who has played 159 international matches including 28 T20Is, was named as a replacement after Saifuddin was ruled out due to a back injury.

Hossain was a reserve as per the allowance for teams to travel with extra players in view of COVID-19 quarantine requirements.