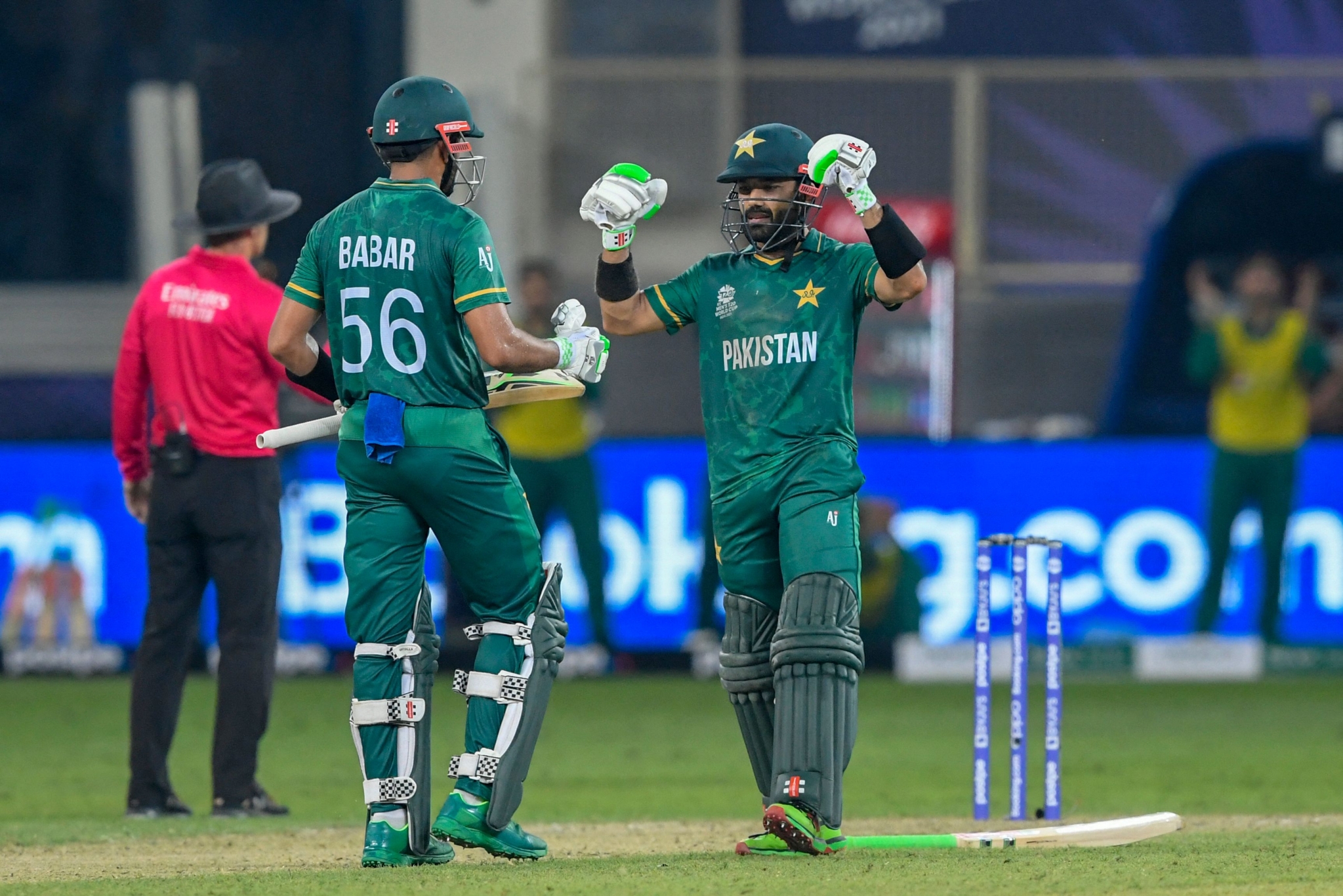 Batting is our strength, Babar Azam proclaimed on the eve of the match. And batting it was, that helped Pakistan end India's dominance against them in T20 World Cups. Azam and Mohammad Rizwan struck a record, unconquered 152-run partnership to help the men in green begin their T20 World Cup campaign in the Super 12 stage with a ten-wicket win in Dubai on Sunday.

Rizwan began in an emphatic manner, hitting a four and six in the very first over off Bhuvneshwar Kumar. It was in stark contrast with how Pakistan began with the ball - Shaheen Shah Afridi trapping Rohit Sharma LBW on the fourth delivery of the match. Azam then hit a delectable off-drive off the next over, off Mohammed Shami.

Shami was then taken for two fours in the penultimate over of the powerplay as Pakistan finished the phase on 43 for none. Varun Chakravarthy and Ravindra Jadeja then kept things under control but Azam's six against Jadeja and four off Chakravarthy towards the halfway stage changed the flow.

The Pakistan captain and wicketkeeper-batter looked quite untroubled as dew also played its part. The pair hit a six each in Chakravarthy's final over, with Azam crossing his 21st half century. Rizwan also continued his excellent T20I form in 2021, scoring his ninth T20I fifty.

With Azam and Rizwan unbeaten till the end, Pakistan registered their first-ever ten-wicket win in T20Is, thereby inflicting a ten-wicket loss on India for the first time.

Earlier, Virat Kohli scored his 29th T20I half century as India posted 151/7 in their 20 overs, with Afridi picking three wickets, after they won the toss and opted to bowl.

Afridi rocked India back early, dismissing Rohit Sharma (zero) LBW on the very first ball he faced, before cleaning up KL Rahul (three) to reduce India to six for two in the first 13 balls. Kohli was then joined by Suryakumar Yadav, who looked to be in sublime touch. He first pulled Afridi over deep mid-wicket before nailing a sweep off Imad Wasim's left-arm spin.

Hasan Ali's introduction, though, helped as he dismissed Yadav caught behind for 11. Rishabh Pant and Kohli then resurrected the innings a bit. They added 53 for the fourth wicket, with Pant showing his wares by hitting a couple of one-handed sixes. However, he was deceived by Shadab Khan's flight and Pant (39) skied one up only for Khan to take it.

While Pant missed his half century, Kohli ensured that he got his, which was his record tenth in T20 World Cups - the most, hitting delectable cover drives in the process. A slower short ball from Afridi, however, undid Kohli, who was out for 57. It was the first time he was dismissed by Pakistan in T20 World Cups.

Hardik Pandya hit a couple of fours in his stay, while India were fortunate to get 17 off the penultimate over, thanks to an overthrow and a no ball by Afridi. The left-arm pacer finished three for 31, while Ali picked two.