WATCH VIDEO: A dream first over by Namibia's Ruben Trumpelmann against Scotland in T20 World Cup 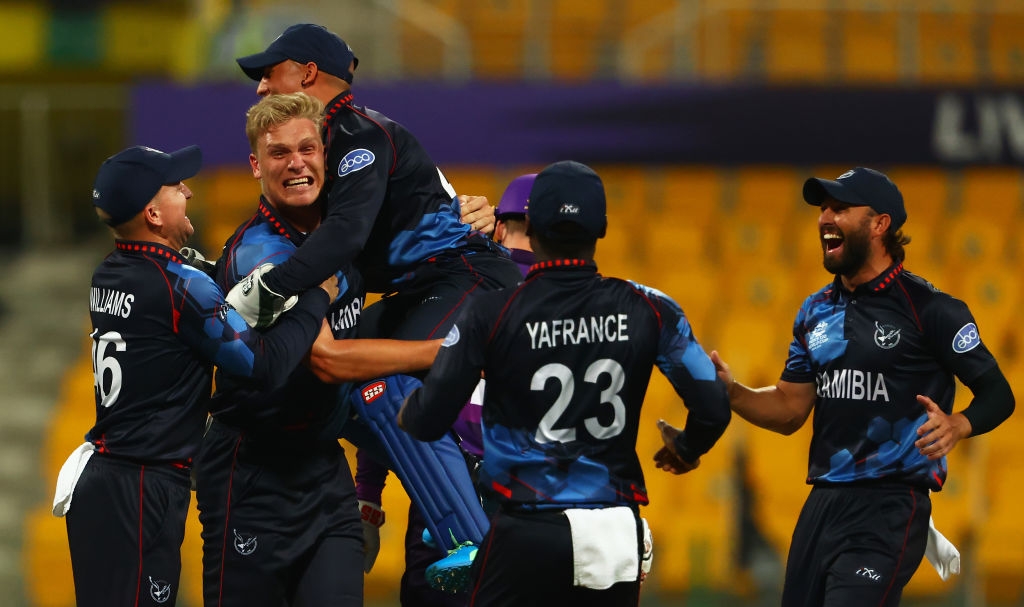 Ruben Trumpelmann (2nd from left) is hogged by his Namibia team-mates. | Photo: Twitter/T20WorldCup

Ruben Trumpelmann gave a dream start for Namibia against Scotland in their Super 12 clash in the T20 World Cup in Abu Dhabi on Wednesday.

With a peach of a delivery to begin the match, Trumpelmann bowled a full ball just outside off with a bit of movement in. George Munsey looked to poke it to the off side and ended up playing it on to the stumps. A legal ball, sandwiched by two wides later, the left-arm seamer got one to go straight on outside off, which Calum MacLeod edged to the wicket-keeper.

On the very next ball, captain Richie Berrington got a proper inswinger, and was hit on his front pad, going past his defense. The umpire gave it out, Berrington reviewed but didn’t succeed.

WATCH: Is this the craziest first over in T20 World Cup history?

After Scotland faced a mighty trial by spin against Afghanistan in the previous match, their top order was undone by seam at the start of their second Super 12 match in the T20 World Cup.

Scotland were asked to bat first by Namibia, who won the toss.