SAvsIND: It’s a Shardul Thakur show as India bounce back in the game, at 85/2 after a thrilling day of cricket 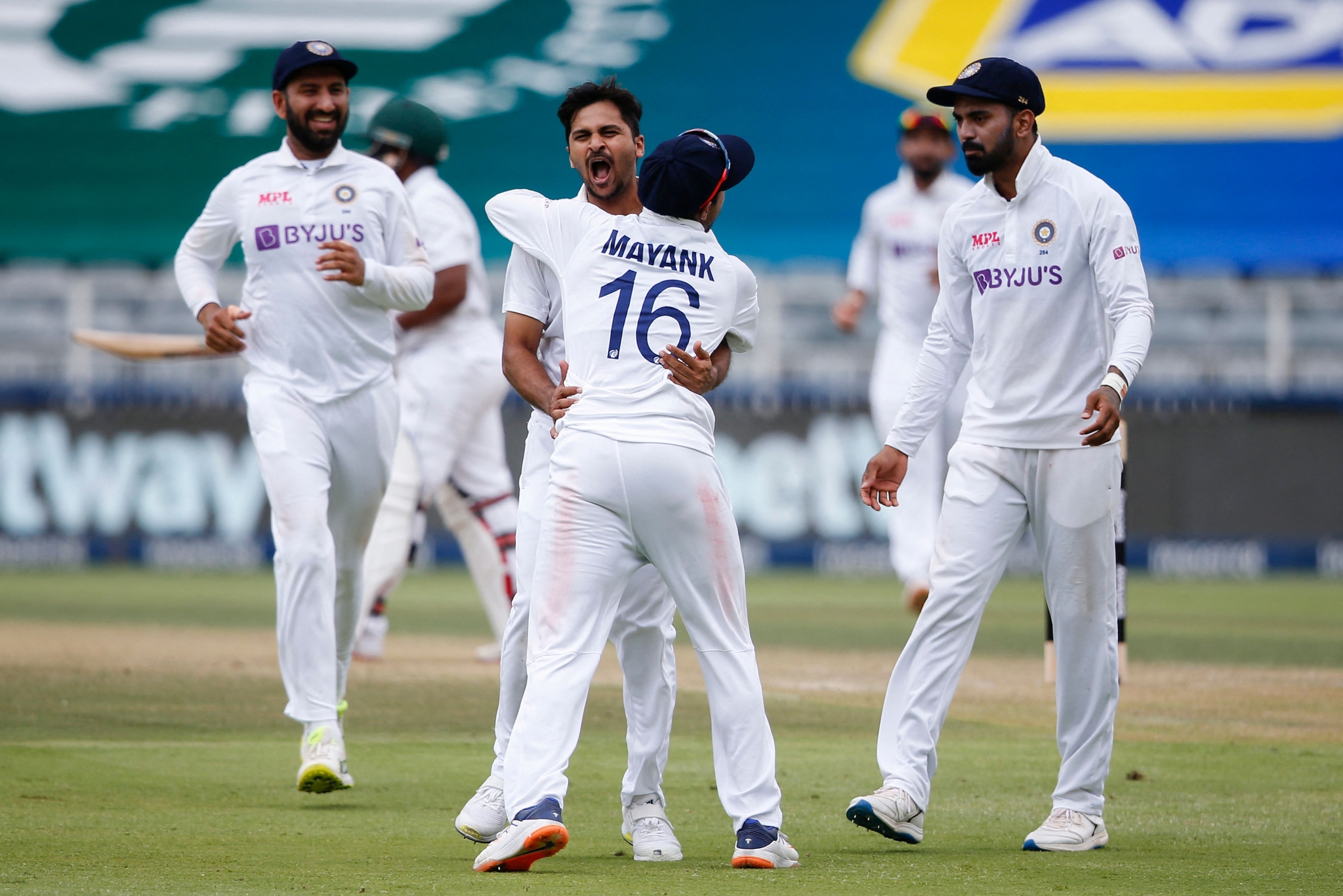 Unheralded seam bowler Shardul Thakur turned out to be an unlikely hero with a career-best 7 for 61 to keep India on even keel against South Africa on an intriguing second day of the second Test here on Tuesday.

Standing at 5 feet 7 inches and with a physique which is an antithesis of what is perceived to be a fast bowler's body, the skiddy Thakur (17.5-3-61-7) landed crucial blows at opportune moments to send the Proteas packing for 229 in their first innings.

It was his effort that nullified India's seemingly inadequate first innings score of 202 with the lead being restricted to 27 and then erased by visitors as they reached 85 for 2 at stumps, losing stand-in skipper KL Rahul (8) and Mayank Agarwal's (23) wicket.

The two under-fire seniors Cheteshwar Pujara (35 batting) and Ajinkya Rahane (11 batting) were at the crease and for a change showed a lot of positivity and intent. India now lead by 58 runs.

The 'Tiger' was in a mood to hunt inside the 'Bull Ring' under sunny the Johannesburg skyline and he did exactly that, coming up with a performance which is over and above what even coach Rahul Dravid would have expected.

On a pitch with spongy, tennis ball-like bounce, a total of 180 to 200 will be an onerous fourth innings chase for South Africa as the match is expected to end well within four days if the weather doesn't play spoilsport.

The day started nicely for South Africa as their dogged skipper Dean Elgar (28 off 120 balls) was happy to play the ugly waiting game while allowing his younger colleague Keegan Peterson (62 off 118 balls) to play an attacking role.

It was going well in a stand of 74 as South Africa reached 88 for one before Thakur was brought into the attack in the 34th over as the second change.

With Mohammed Siraj bowling from a shorter run-up and not able to exert himself fully due to a hamstring injury, the man from Maharashtra's Palghar district had to take more responsibility with the team virtually one bowler short.

Mohammed Shami (2/52 in 21 overs) and Jasprit Bumrah (1/49 in 21 overs) once again bowled their hearts out, beat the outside edges without much luck before Thakur came into the picture and dealt three blows in quick succession just before lunch.

Thakur, when he burst into the domestic scene, was more of a 135 kmph plus bowler but over the years, he is bowling in the 120-130 kmph band but possesses a mean outswinger and a lethal off-cutter delivered with scrambled seam and grip of a slower delivery.

In case of a scrambled seam, the stitched part of the ball doesn't hit the ground and if the ball's shine is maintained well, which the Indian team did diligently, it lands on the skin (red part) and starts skidding at a pace which is more than what the batters can apprehend.

"Since he has a habit of bowling a lot of off-breaks (slower delivery for pacers with tweak of finger) in limited overs cricket, he is using that skill effectively in Tests also. He might bowl at 130 kmph but with the scrambled seam, he hurries the batter a touch more)," his childhood coach Dinesh Lad told PTI from Mumbai.

The delivery that got Peterson was a conventional outswinger which wasn't at drivable length and the batter went for a non-existent punch through covers only to land in second slip Agarwal's palms.

Before that, Peterson's left-handed skipper Elgar got one that moved late taking the outside edge.

Similarly, in the second session, just when Temba Bavuma (51 off 60 balls) and Kyle Verreynne (21) added 58 and looked like heading for a sizeable lead, Thakur produced a fuller one with scrambled seam that landed on the 'fifth off stump' and cut back sharply to trap the young keeper leg before.

In case of Bavuma, the delivery was fired towards his rib cage and was drifting down before Rishabh Pant took an extraordinary catch down the leg-side.

He again came back in the final session to wrap up the innings.

Thakur doesn't have the lethal yorker of Bumrah or the top quality skill sets of Shami or the scorching pace of Siraj. But he is more than the sum total of his parts, in this case the skills which make him special.

A contentious caught behind

Out of Shardul's seven wickets, the dismissal of Rassie van der Dussen did create some controversy as TV replays turned out to be inconclusive whether Thakur's off-cutter, that literally had the batter cut into half, was taken cleanly by Pant.

One angle seemed to suggest that it was picked on the bounce and it was learnt that home team captain Elgar visited the match referee's room to have a chat.

In 2011, Mahendra Singh Dhoni in an exemplary show of sportsmanship had called back Ian Bell after the batter was adjudged run-out in the post lunch session.

On Tuesday, with the match hanging in balance, no such favours were doled out by the current team. 5 things you should know about Shardul Thakur as the all-rounder takes 7-wicket haul against South...