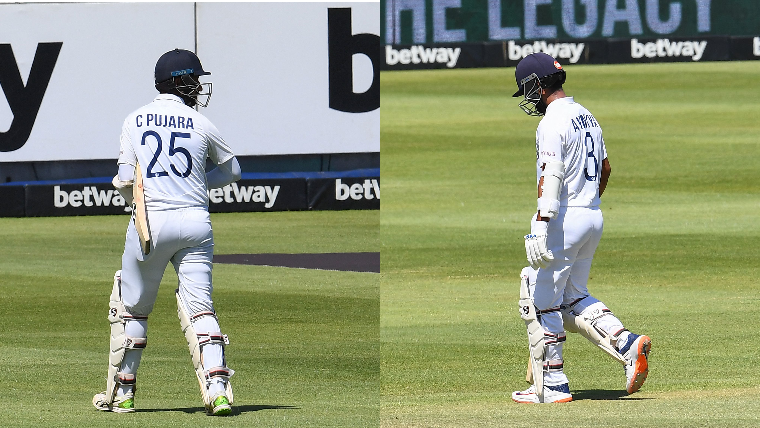 Cheteshwar Pujara (l) and Ajinkya Rahane after being dismissed in the Cape Town Test. | Photo: AFP

A few days back, after their umpteenth failure, Cheteshwar Pujara and Ajinkya Rahane were trending on social media with the hashtag being 'PuRane' (Old).

Now, social media is a platform for outrage almost 24x7 and it is very easy to call the latest trend as the "proverbial outside noise", which the Indian cricket team management does not like taking note of.

But after five failures in six completed knocks in South Africa, the two veterans surely seem to have played their last Test for India for some time.

It will be a travesty if two among the trio of Hanuma Vihari, Shreyas Iyer and Shubman Gill (recovering from a shin injury) don't make it to the playing eleven in the two-Test series against Sri Lanka in February-March.

Rahane's tally stands at 136 at an average of 22.66 and Pujara is even worse with only 124 at 20.66. In all likelihood, the statistics will be the final nail in the coffin when Chetan Sharma and his colleagues pick the squad for the next Test series in India.

More than anyone else, the duo knows that time indeed has run out for them. Never ever has Indian cricket establishment given such a long rope to two individuals like the one being given to Rahane and Pujara.

In last two years, they have failed consistently and found success not even sporadically whereas it should have been the other way round.

It seemed that team management as well as selectors were bent on giving them every chance to succeed. And they have been blowing those away.

Perhaps now stake-holders would think that it's time Vihari and Iyer get half of those chances to fail. One can vouch they wouldn't do much worse than what Rahane and Pujara have done.

So what is the problem with Pujara and Rahane? It's a two-fold issue of technical issues which have also been compounded by mental cobwebs.

The most abused word in Indian cricket is 'process' and perhaps the favourite of most cricketers when questions that are difficult to address are thrown at them.

"I trust my process," is a catchphrase that one hears often in Indian cricket.

But in case of Rahane and Pujara, it can be said that the process has clearly not worked for a while now.

Perhaps it's only fair to give them a break and look at other options which will benefit Indian cricket.

Both of them have been getting out in the same fashion match after match but there seems to be no corrective measures taken and at times it seems they have no clarity as to how they want to play -- fearless cricket or defensive .

In case of Pujara, whose range of strokes is very limited, bowlers have worked him out providing him with very little room to play the square cut and over time, he has now missed out on half volleys which used to be duly patted back to the fielders at cover or mid-off.

His mode of dismissals is also pretty similar as thrice since the Kanpur Test against New Zealand, he has been cramped for room with short balls on his rib cage and he has been slow in trying to get away from that awkward line.

Add to it, the go-slow approach that worked in earlier years isn't working as batters around him aren't scoring as many runs which is also putting him under more pressure.

Pujara's approach and his struggles in the middle make other players in the dressing room feel that there are demons on the track when in reality there's none.

In case of Rahane, the footwork is in a mess, as pacer after pacer bowling slightly back of length on the off-stump channel is able to get him out without much effort.

As a result, he has become a walking wicket and perhaps fit to be axed in the next selection meeting.

However, in Indian cricket, strange things have happened even though one will have to rub their eyes in disbelief if Pujara and Rahane add to their 95 and 82 Tests respectively.

If that happens, it will be a disservice to the Iyers and Viharis, waiting for some semblance of security. 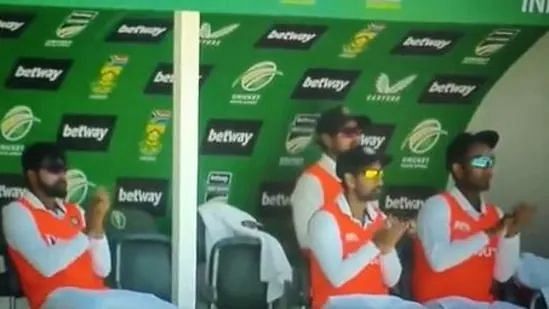