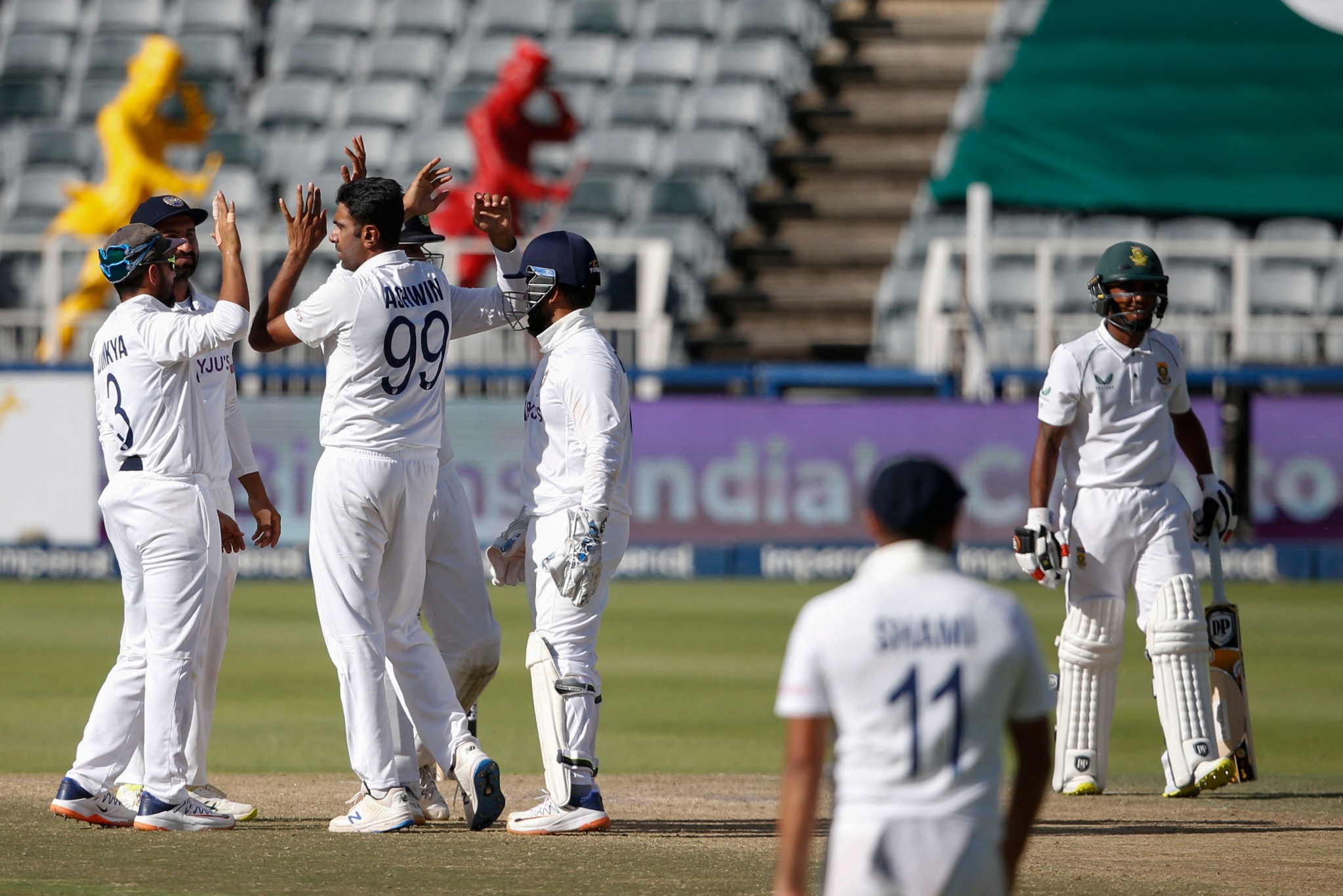 A stoic innings from captain Dean Elgar alongside a scratchy one from Rassie van der Dussen ensured South Africa lost no more than two wickets till Stumps on Day Three of the second Test against India at the Wanderers in Johannesburg. The hosts need 122 runs while the tourists eight wickets to win.

Elgar finished unbeaten on 46 and was involved in a fluent 47-run opening partnership with Aiden Markram (31), who was the aggressor. Markram was happy to play his shots and was wonderfully set up by Shardul Thakur.

Elgar then kept the tourists at bay for another 46 runs with Keegan Petersen (28), who was trapped in front by Ravichandran Ashwin. The off-spinner became the first spinner since Shadab Khan of Pakistan in 2019 to pick a wicket in Johannesburg.

However, Elgar and van der Dussen saw off the final phase of the day, playing over 23 overs in the process.

Earlier, Cheteshwar Pujara (53 off 86 balls) and Ajinkya Rahane (58 off 78 balls) added lifelines to their respective careers with their timely knocks while Hanuma Vihari (40 not out) also played a crucial part in swelling India's overall lead as they finished their second innings at 266.

The Indian middle-order, which has flattered to deceive on most occasions in the past couple of years, did its job and also got some much needed late-order support from Shardul Thakur (28).

Pujara and Rahane in a rarely seen counter-attacking mode added 111 runs in just 23.2 overs, getting some breathing space for themselves.

When Marco Jansen bowled one short, Rahane uncorked the slash over point for a six. Pujara's 50 came off 62 balls while Rahane's half-century was completed in 67, signalling that they were trying to show 'intent' and put team's interest above everything else.

There was a time when India were 155 for two with a lead of 128 and it seemed that South Africa's propensity to bowl too short or too full was proving to be damaging.

But then Rabada, South Africa's best exponent of fast bowling since Dale Steyn, produced a piece of inspiration that is so synonymous with traditional format.

Rabada found that ideal back of length where there is a crack and it landed there to deviate sharply, taking Rahane's edge into keeper Kyle Verreynne's gloves.

Pujara then got one from Rabada in the off-stump channel to be plumb despite lunging far forward.

It was Vihari and Thakur, who were then involved in a 41-run stand for the seventh wicket and then had two little but enormously important stands of 17 and 21 respectively with tail-enders Jasprit Bumrah and Mohammed Siraj to set up a good chase for the Proteas.