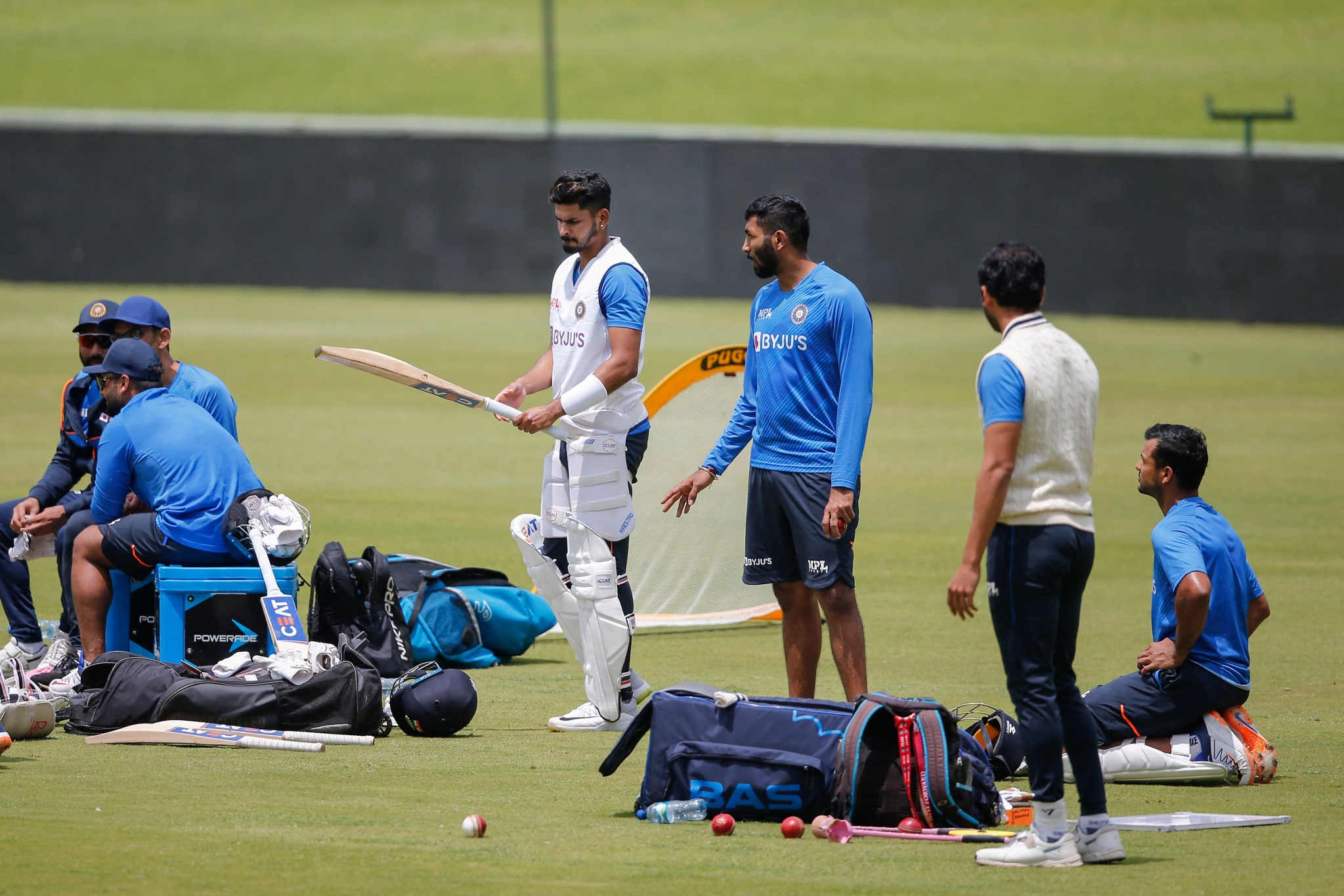 India players during practice in Centurion ahead of the Test series against South Africa. | Photo: AFP

Four bowlers or five? Five batters or six? These are the couple of questions that have been making rounds ever since India landed in Centurion ahead of the Boxing Day Test against South Africa.

In a bid to prepare for the Protea challenge, India had chosen to send Hanuma Vihari with the ‘A’ side to get acclimated to the conditions. He returned with three fifties, including one in each innings of the second ‘unofficial’ Test. The other contender for the middle order, Shreyas Iyer, announced his arrival to Test cricket in style. He hit a swashbuckling century and followed it with another fifty – both coming with India in dire situations – on Test debut in Kanpur.

The incumbent number five Ajinkya Rahane has found runs hard to come by in 2021. He averages a mere 19.57 in 12 Tests in the year. The dip in form resulted in him losing his Test vice=captaincy and was in doubt for the South Africa-bound flight. But that he is on tour asserts the backing the team management has in him.

Asked about India’s inclination for the number five spot, Rahul opted to dead-bat in the press conference on Friday ahead of the opening Test match of the series.

“It is a very difficult decision to make obviously. Speaking about Ajinkya, he has been an important member of the Test team, played very, very crucial knocks in his career," he said about his senior team-mate.

“In the last 15-18 months, he has played some crucial knocks, that partnership with (Cheteshwar) Pujara at Lord's, was important for us in winning the Test match.

"Shreyas, obviously, has taken his chances and got a brilliant hundred (along with a fifty) in Kanpur and he is very exciting,” added Rahul.

“Hanuma has done the same for us, so it's a tough decision. We will start having a chat today or tomorrow and you will get to know in couple of days’ time.”

💬 💬 We’ve had a great week of preparation.

Vice-captain @klrahul11 takes us through how #TeamIndia is getting into the groove for the first #SAvIND Test. pic.twitter.com/qGB8YcZZ57

While Vihari ideally should get in, given he was sent ahead for this very series. But what is certain is that India will be playing five bowlers, with Ravichandran Ashwin likely to be the lead spinner.

“Every team wants to pick up 20 wickets to win Test match. We have used that tactic and it has helped us in every Test match that we have played away," Rahul stated.

“Workload also becomes slightly easier to manage with five bowlers and when you have that kind of quality (in Indian ranks), I think, we might as well use it.”

With Ravindra Jadeja not part of this side because of injury, the batting could be a bit thin with the inclusion of Ashwin and that leaves a huge scope for Shardul Thakur’s selection. That leaves two other slots, assuming Jasprit Bumrah is a shoo-in, for which Mohammed Shami, Mohammed Siraj, Ishant Sharma and Umesh Yadav will vie.

On the contrary, Siraj has run in and broken the back of the opposition every single time he has had the cherry in hand. All these facts suggest that the think-tank has a lot to do in the lead-up to the opening Test of the series.