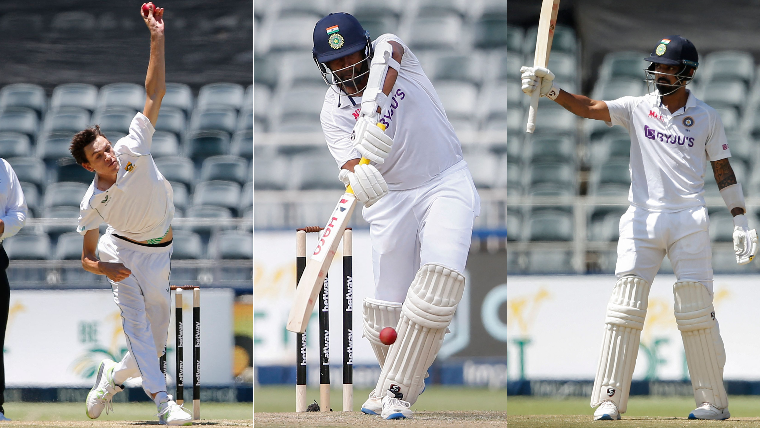 It’s good to have some habits. KL Rahul showed so.

Some patterns are not really good. Cheteshwar Pujara and Ajinkya Rahane’s extended failures said so.

And it is good to learn lessons from the past. Kagiso Rabada and Marco Jansen’s bowling performances proved that.

All in all, India started the New Year Test against South Africa at the Wanderers Stadium on a wrong note as Jansen’s four combined with three wickets each from Rabada and the returning Duanne Olivier meant the tourists were bowled out for 202 on the opening day.

That South Africa were 35 for one at Stumps is an indication that India’s score might not be all that bad.

On the day he became India’s 34th Test captain after Virat Kohli was ruled out due to upper back spasms, Rahul continued his watchful ways from the Centurion Test after opting to bat. Along with his opening partner Mayank Agarwal, he added 36 before the latter nicked one behind off Marco Jansen. Pujara stayed in the middle with Rahul for a while before Duanne Olivier, brought in for Wiaan Mulder, struck.

Olivier, who became eligible to play after Brexit rendered his Kolpak deal void, was disciplined yet unlucky in the first hour. But he got one to rear up from a length, to which Pujara had no second line of defence. The India no.3 fended and was caught at gully after the ball popped off the edge. On the very next ball, Rahane guided one to third slip to continue his poor run of form.

Rahul and Hanuma Vihari, brought in for Kohli, offered resistance for 42 runs before a superb catch by Rassie van der Dussen ended the latter’s stay for 20.

Rishabh Pant and Ravichandran Ashwin looked for quick runs with the latter scoring 46 off just 50 balls. However, Jansen, Olivier and Rabada struck regularly to bowl the tourists out.

Jasprit Bumrah, who stayed unbeaten on 14 off just 11, then began well with the ball along with Mohammed Shami. The latter trapped Aiden Markram in front of the stumps to peg back the hosts early.

However, captain Dean Elgar and Keegan Petersen, who was dropped minutes before Stumps, ensured that the Proteas didn't lose any more wickets.