SA vs IND, 2nd Test: Clock ticking faster than ever for Cheteshwar Pujara, Ajinkya Rahane after first-innings failure in Johannesburg 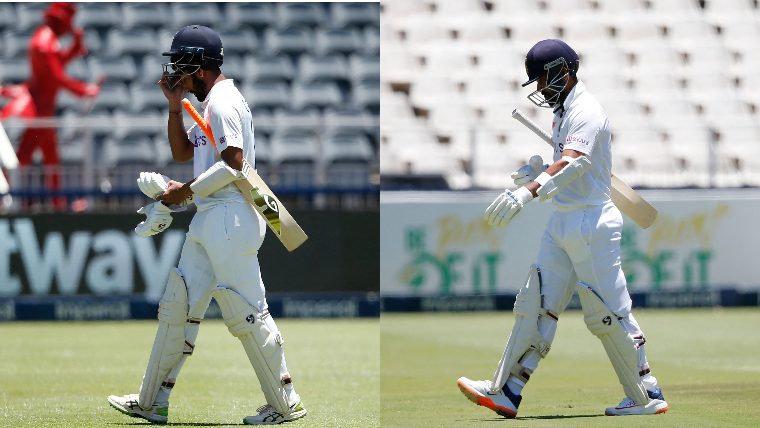 Cheteshwar Pujara (l) and Ajinkya Rahane of India walk off disappointed after their dismissal against South Africa in Johannesburg. | Photo: AFP

Four of the nine overs after Mayank Agarwal’s wicket were maidens. Cheteshwar Pujara played out three of those – two against left-armer Marco Jansen and one against Kagiso Rabada.

This was after Agarwal and KL Rahul saw off the new ball in the first hour without losing a wicket and added 36 on the first day of the second Test at the Wanderers in Johannesburg.

Pujara, of late, makes normal pitches seem difficult to bat; the Wanderers surface on Monday had a bit of extra bounce and the edges of Pujara’s bat were more in play than the middle. It is just one year since the India no.3 played a couple of stoic knocks in Australia to help defeat the hosts. But ever since – in fact even before that – Pujara has looked a pale shadow of the Pujara, who had the perfect defensive game and was a natural Rahul Dravid successor.

Since the start of 2020, Pujara has averaged a mere 25.52 in 19 matches with a best of 91 that came in Leeds. He has only seven half centuries to show and four ducks, including the one in the first Test against South Africa.

After the edges off Pujara’s blade evaded the short leg fielder Rassie van der Dussen numerous times, Duanne Olivier, brought in for Wiaan Mulder, got one to rear up from a length outside off, to which Pujara had no second line of defence. The ball took the edge of his bat and Temba Bavuma at gully gulped it. As is the norm, Pujara had a glance at the surface and walked off. Three runs, 33 balls. With Virat Kohli ruled out of the Test due to an upper back spasm, Ajinkya Rahane walked in at no.4. A customary look at his numbers, like they show on air when a new batter walks in. Since January 2020, Rahane has batted 32 times in Test cricket and has returned 751 runs. A forgettable 2021 saw him average 20.82, but that number reads 24.22 if 2020 also is considered. He has the Boxing Day hundred from the MCG Test of 2020 to show apart from two fifties. Four ducks – the latest being added on Monday.

Olivier, eligible to play for South Africa after Brexit rendered his Kolpak deal void, bowled perhaps the most harmless ball on a length outside off. Rahane could have shouldered arms, like KL Rahul, captaining India in Kohli’s absence, had for most of his 72 balls until then. But the former India vice-captain chose to hang his bat out, only for the ball to take the edge and fly to gully. A first-ball duck after being given so long a rope that his Test average dropped to under 40s from being close to 50 at a point.

Sunil Gavaskar, on commentary at that point, had seen enough to mouth some stern words. “After those two dismissals one can say that they probably have just the next innings, both Pujara and Rahane, to save their Test careers. There have been questions asked about their place in the team and now with these two dismissals, they have just one innings left. If there is another innings and the way India is going, it looks like there will be another for them to score something and maybe keep their place in the team,” he said.

Given how low the voices around dropping of senior players are in Indian cricket, Gavaskar was as loud as he could get, especially on a global commentary feed. Dravid may have brushed aside the worries of the senior duo ahead of the Test, but the lack of form of Pujara and Rahane in the crucial middle order spots have grown louder than the clamour around that. Perhaps too loud for Dravid and the Indian team management to turn a deaf ear to. In fact, Rahul, who scored 50 on his Test captaincy debut, got more unplayable deliveries from Lungi Ngidi, who was working up pace as well as was disciplined in his lines and lengths. Olivier, too, bowled quite a few working overs to Rahul, whose patience has stood out on this South African tour so far.

That Ravichandran Ashwin could score 46 of the 50 balls he faced should tell a thing or two about the pitch not being treacherous like Pujara had made it seem. This is not to undermine Ashwin’s batting abilities. But the fact that India had a year like they did in 2021 despite the failures of the batting says a lot about their bowling.

After the tourists were bowled out for 202, Mohammed Shami yet again struck early by trapping Aiden Markram plumb. Dean Elgar and Keegan Petersen were only fortunate to have survived the barrage of fast bowling from Jasprit Bumrah and Mohammed Siraj, who walked out clutching his hamstring in the penultimate over of the day. Petersen was, in fact, dropped by Rishabh Pant off Bumrah minutes before close of play.

With Hanuma Vihari, who replaced Kohli in the XI, and Shreyas Iyer making the right noises, the clock is ticking faster than ever for Pujara and Rahane. They wouldn’t want to become ‘Purane’ (old in Hindi), a Twitter-coined term. SA vs IND: How Mohammed Shami and Mohammed Siraj stepped up for India in the absence of Jasprit...