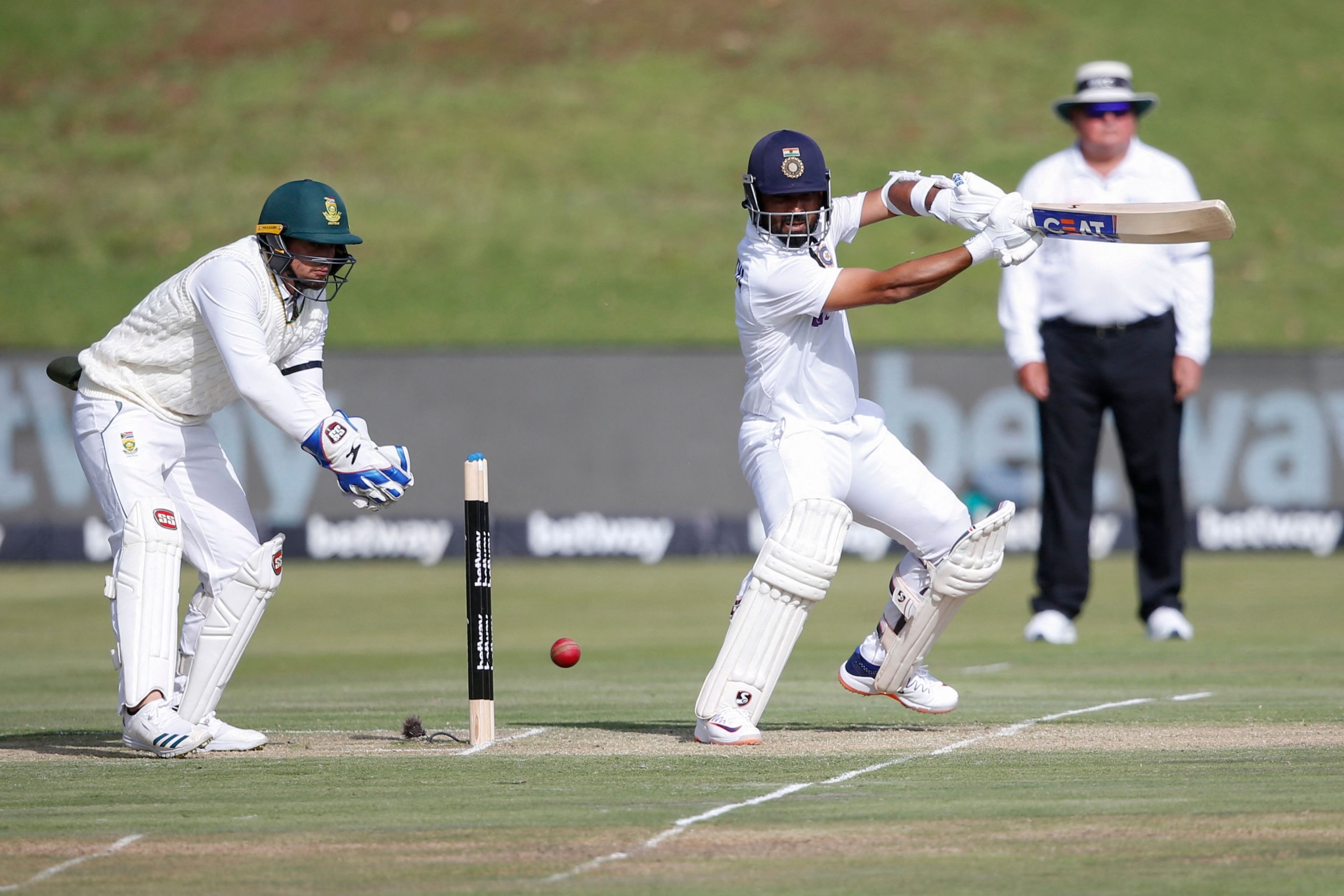 Ajinkya Rahane of India plays one off the back foot through the off side against South Africa in Centurion. | Photo: AFP

Struggle is beautiful to watch in a very sad way, read a tweet.

It was after Ajinkya Rahane walked into the crease with India’s score reading 199 for three on the first day of the Boxing Day Test at the SuperSport Park. Captain Virat Kohli was back in the hut after a fluent 35 and about twelve overs were to be bowled before the second new ball would have been available for South Africa.

Not that it needs any reminding, but before the start of the Test, Rahane’s Test average in 2021 was 19.57. Lungi Ngidi was on the prowl, having hunted three batters down with a combination of fierceness and wit.

On the second ball he faced, Rahane unfurled a confident drive, well, more of a push, through mid-off to get going with a four. He then faced the test of angles from the other end, with the tall left-armer Marco Jansen bowling it across the right-hander from over the stumps. A gift on the pads was gleefully dispatched through square leg.

“Watch the ball, watch the ball,” muttered Rahane as he saw off the over. A bit nervy. A bit jittery. Understandable, given that the former vice-captain was picked over Hanuma Vihari, who was sent to South Africa with the India ‘A’ side to acclimate with the conditions, and Shreyas Iyer, who made as dashing an entry to Test cricket as heroes in Bollywood movies. In short, it was almost a make or break for Rahane.

Struggle is beautiful to watch, in a very sad way.

Rahane trying to straighten his chin position and saying "watch the ball" to himself in full public eye with a string of low scores behind him is... difficult.

To his credit, the 33-year-old looked quite in control. Only once did he actually get beaten and that was as early as the fifth ball of his innings. Mostly fed pace, Rahane rocked back to execute the cut through backward point, got forward early to crunch a drive through covers and maintained his balance to flick one through mid-wicket. It was like watching the Rahane of old. One, whose class in the Indian domestic circuit had forced the selectors to hand him the baggy blue. One, whose Test average hovered around the 50 mark before settling for his current 39.30.

Rahane is not one to get burdened by responsibility; but could it be so that taking the vice-captaincy from him actually freed him up? “Him being relieved of the vice-captaincy would have sent a particular signal to him, which obviously plays on every players' mind. 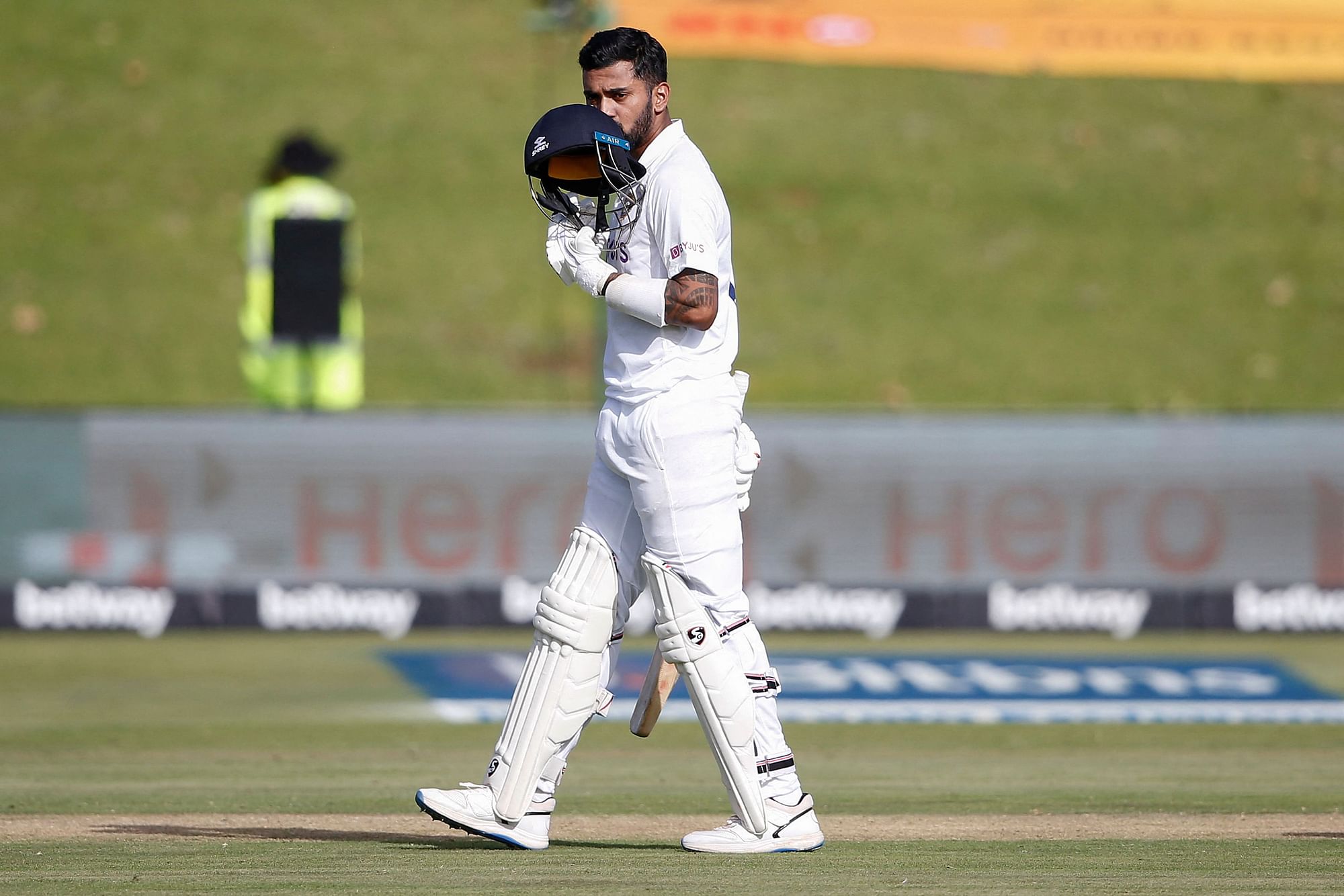 He has come out all guns blazing. He has been very positive in his footwork, he has put away all the bad balls,” former India batting coach Sanjay Bangar told Star Sports.

“He is the sort of player who likes to get good and quick starts. That was very similar to the way Rahul Dravid used to start his innings. He used to like to get to, say 20, in quick time so that there is less pressure on him. And that's why Rahane also shows a similar pattern. All the innings where he has been successful, he has gotten off to flyers and then settled in nicely.”

Perhaps pressure spurs Rahane and gets the best out of him. Think back to the Boxing Day Test of 2020. India 0-1 down in the series against Australia, a 36 all-out playing on the minds, captain Kohli back home due to paternal leave… And Rahane the captain gets Rahane the batter to stand up to be counted, hitting a sublime 112 in the first dig before chipping in with an unbeaten 27 in the second to ensure India cross the line.

In fact, the Mumbai batter thrives in Boxing Day Tests — two hundreds and two fifties, including a 96 in four matches. The one in Centurion is his fifth. He is unbeaten on 40 and the second day’s play was washed away on Monday due to inclement weather. But it is not about that. It is about the sightings of the Rahane of old. The Rahane, who scores runs as if that is the only thing he knew.

Head coach Rahul Dravid had said ahead of the Test that Rahane was in a good space. And Rahane in good space, scoring runs is indeed beautiful to watch.