Rohit: We can’t afford to repeat mistakes in ODIs 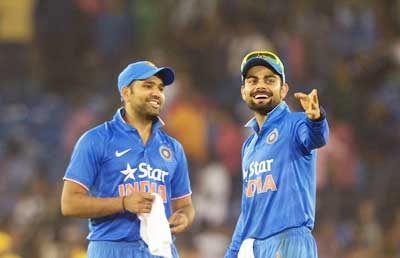 Indore :  Consistency is the key to any team’s success and opening batsman Rohit Sharma (L) asserted that India cannot afford to commit small mistakes often if they aspire to be the numero uno team in world cricket.

Currently ranked No. 2 in ODIs, India snatched defeat from the jaws of victory in the ODI series opener in Kanpur by succumbing to a close five-run loss against South Africa in a high-scoring affair.

Rohit said although India’s death bowling and match finishing abilities were a concern, the players are mature enough to make a comeback in the series.

“Things like this can happen but there are no excuses. We want to strive hard as a team. If we want to be the No.1 team we cannot commit these kinds of mistakes. I hope we won’t keep repeating the same mistakes that are what a champion side doesn’t do. We all are mature enough to go handle such situations,” Rohit, who struck a swashbuckling 150 in India’s losing cause in the first ODI,” said.

Asked Rohit about India’s bowling woes, he said Umesh Yadav and Co. need to be smart and proactive against destructive batsmen like De Villiers.

“It’s (death bowling) a concern, there is no doubt about it. We cannot run away from that but when you are bowling to a player like De Villiers you need to be extra smart, and be more proactive. It’s a concern but all the bowlers are working on it. In the last few games, not only against South Africa but in Bangladesh and Australia as well we made small, small mistakes in the last five overs,” he said.

While he himself has been in rollicking form of late, his opening partner Shikhar Dhawan is going through a lean patch, but Rohit feels the left-hander will come good soon.