Ravindra Jadeja wants to prove himself, not the world

Jadeja wasn't a regular part of the white-ball set-up but came into the scheme of things closer to the ODI World Cup in England.
TapanMohanta 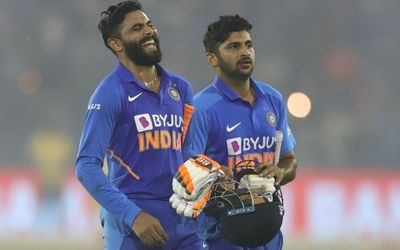 Cuttack: The unbeaten 39 in a high-scoring series-decider earned him plaudits but for India all-rounder Ravindra Jadeja, it was more about proving a point to himself rather than the world that he is still a good enough player in limited-overs format.

Jadeja wasn't a regular part of the white-ball set-up but came into the scheme of things closer to the ODI World Cup in England.

After former India cricketer-turned-commentator Sanjay Manjrekar termed him a "bits and pieces" player he nearly pulled it off for India in the World Cup semifinal against New Zealand with a brilliant 77 off 59 balls.

"It was a very crucial innings as it came in a series-decider. The wicket was so good to bat on, we could just played with singles. We just needed to play according to the merit of the ball.

"I didn't play too much ODI cricket (this year). I tried and gave my best be it in bowling, batting or fielding whenever I got an opportunity," Jadeja, who played 15 of India's 28 ODI matches this year, said after their win at Barabati Stadium on Sunday.

The flat Barabati wicket had little to offer for the bowlers and the message from his skipper after he got out was clear -- not to do anything silly with 30 needed from 21 balls.

"Virat and I were going well in the middle and the wicket was good to bat. He said he would look to finish the chase but unfortunately he got out. Then he (Kohli) told me to play normal cricketing shots and not to do something silly, just try to play straight, in the V."

It was Shradul Thakur, who played the role of the finisher smashing two fours and one six in his six-ball 17 not out to seal the chase with eight balls to spare. "It was about playing till the last ball and we knew we would win.”