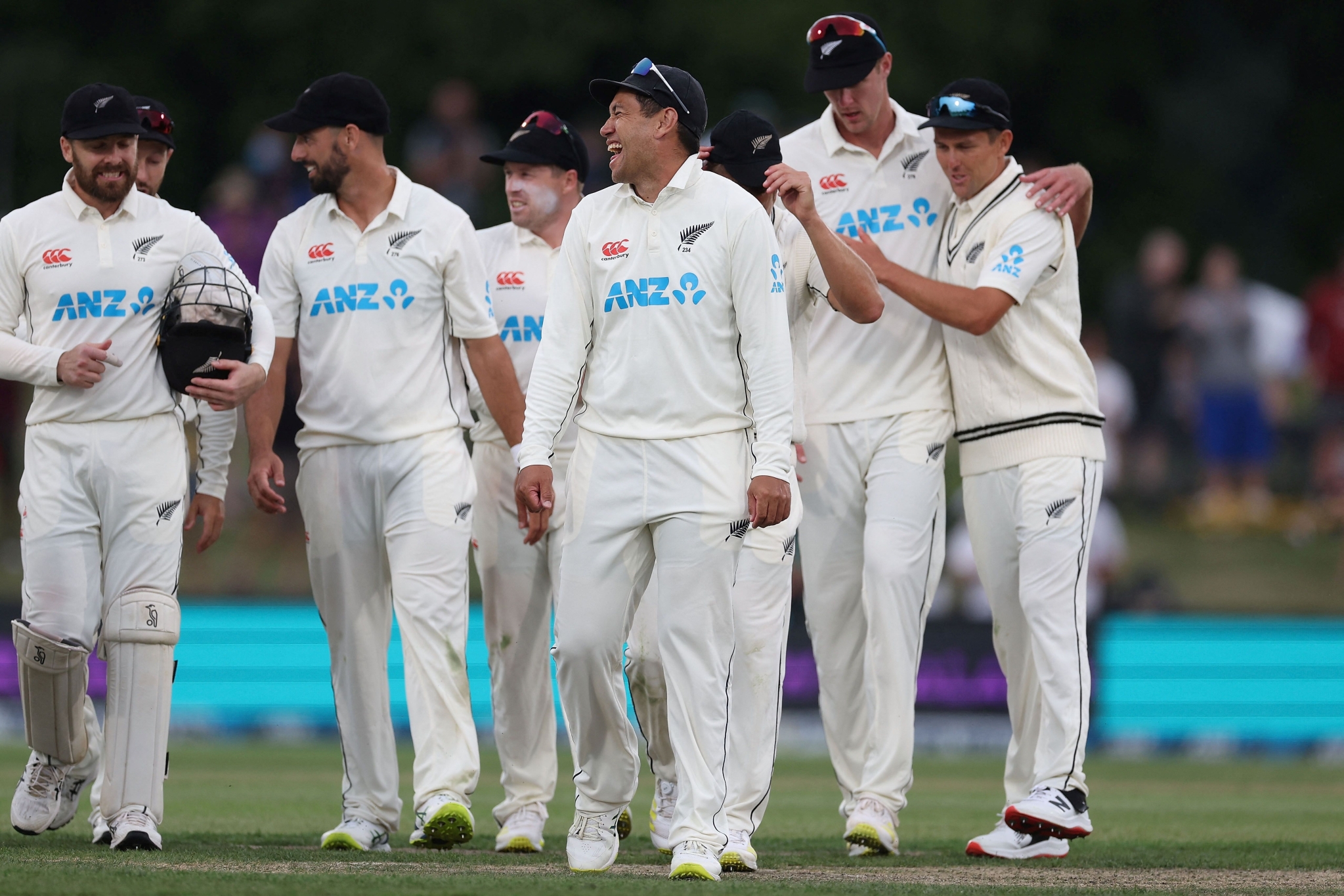 New Zealand players walk off in Christchurch after their Test win over Bangladesh. | Photo: AFP

New Zealand came roaring back into the second Test, crushing Bangladesh by an innings and 117 runs as the hosts levelled the two-Test series 1-1 at the Hagley Oval in Christchurch on Tuesday.

Despite a brilliant century from Litton Das, who smashed 102 off 114 deliveries laced with 14 boundaries and a six, the tourists could only manage 278 in 79.3 overs as tall pace bowler Kyle Jamieson (4/82) and Neil Wagner (3/77) ran through the Bangladesh side to avenge the eight-wicket first-Test defeat.

On an emotional day when batting stalwart Ross Taylor ended his Test career on a winning note, Bangladesh openers Shadman Islam (21) and Mohammad Naim (24) ensured their team did not lose any early wickets to Tim Southee (1/54) and Trent Boult (0/42).

It was Jamieson who got the first breakthrough for New Zealand as Islam clipped the ball behind to Tom Blundell. Najmul Hossain Shanto walked out to bat next and showed intent throughout his innings, including a top edge six over fine leg.

Shanto raced to 29 off 36 deliveries before Wagner got the final word and picked up his first wicket of the Test match. After lunch, Mohammad Naim was removed courtesy of a breath-taking catch from New Zealand captain Tom Latham, who dived to his left with his hand stretched out.

The closing stage of the second session was all about Wagner. He continued his fine spell picking up captain Mominul Haque (37), who edged one into Ross Taylor's safe hands at first slip. He finished the spell by luring Yasir Ali (2) into a simple catch for Latham, ensuring New Zealand were in total control heading into tea.

Litton Das (102) and Nurul Hasan (36) steadied the ship for the visitors after the break as Das brought up his 12th Test fifty in a Boult over that saw 16 runs conceded, including four boundaries.

After a 101-run partnership for the sixth wicket, Nurul Hasan was caught by Wagner at mid-off handing Daryl Mitchell (1/18) his first wicket of the match. The next to go was Mahedi Hasan (3), thanks to another catch from Latham off a Jamieson delivery.

Meanwhile, Das displayed great resilience at the other end and was rewarded as he brought up his second Test career century before being trapped LBW by Jamieson for 102.

The ninth wicket also fell to Jamieson as Shoriful Islam went for a duck after lofting the ball into Southee's hands.

New Zealand's comprehensive victory was even sweeter when Ross Taylor bagged a wicket on the final ball of his Test career, levelling the series 1-1 and earning the hosts 12 important points in their quest for the World Test Championship.