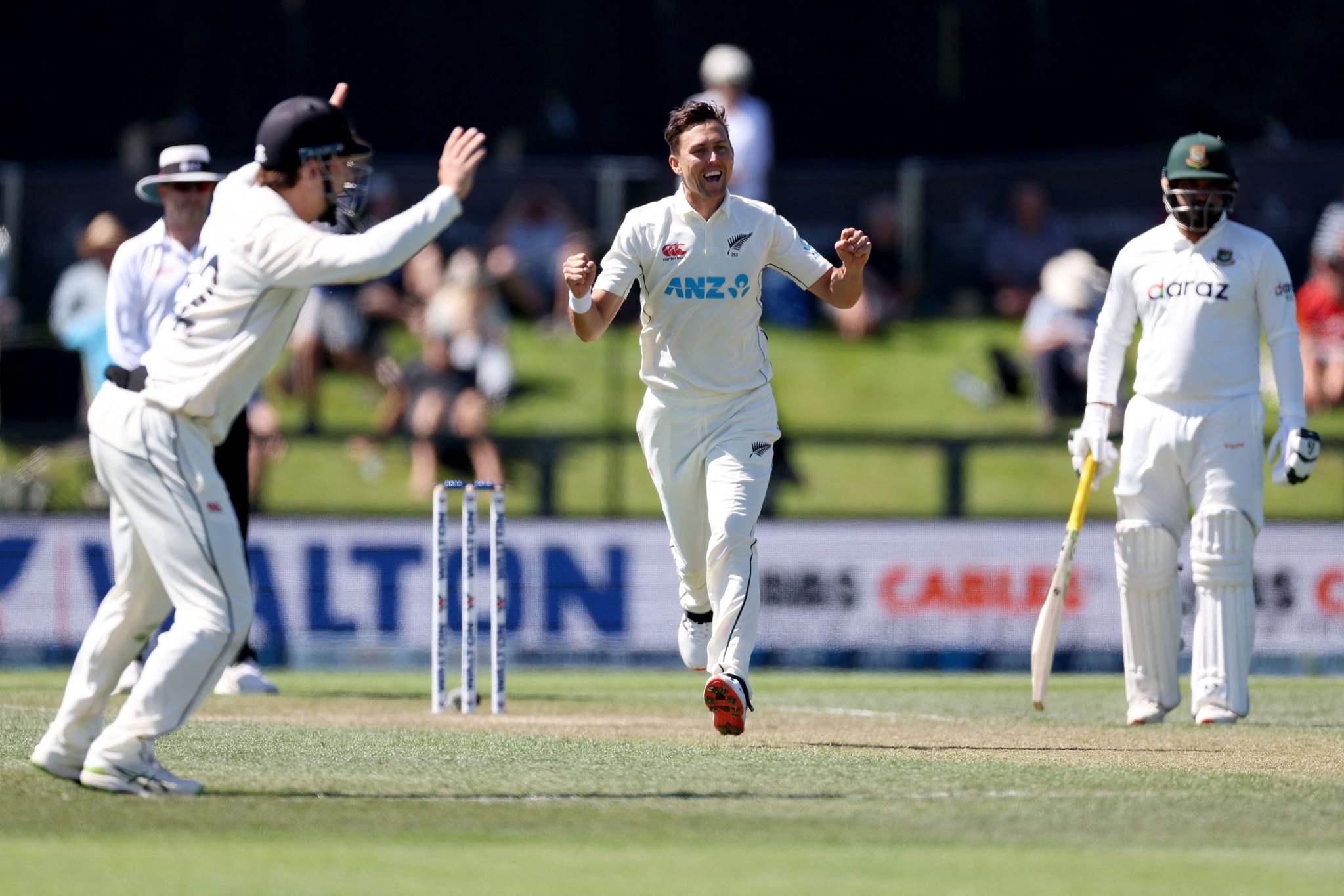 Tom Latham scored 252, Devon Conway banked another century and Ross Taylor likely played his last test innings as New Zealand declared at 521-6 on Monday before bowling out Bangladesh for 126 on the second day of the second Test at the Hagley Oval in Christchurch.

Trent Boult took 5-43, including his 300th test wicket to join Richard Hadlee, Daniel Vettori and his new ball partner Tim Southee among New Zealanders who have taken 300 wickets in tests. The milestone came in Boult's 75th test at an average of 27.35, along with his ninth five-wicket hauls in tests.

Latham declared New Zealand's first innings halfway through the middle session on day two in Christchurch, and Boult and Southee raced through the Bangladesh top order to leave the tourists' 11-4 in the seventh over - challenging their test low score of 43.

Yasir Ali showed fortitude to post a maiden test half century and was out for 55 just before stumps.

Latham took two catches at second slip among those four early wickets to keep up his outsized influence on the match which represented a massive shift in fortunes of the series after Bangladesh shocked World Test Champion New Zealand by winning the series-opener by eight wickets.

Latham's second double century in tests was a mammoth innings which began when he lost the toss Sunday for the sixth time as New Zealand's stand-in captain. It ended 552 minutes, or 5 1/2 sessions, later after Latham had shared partnerships of 148 for the first wicket with Will Young and 215 for the second wicket with Conway.

Latham reached his double century from 305 balls early on the second day. But he made a rare error when he called his partner through for a quick single just as the pair were regaining momentum and Conway, who looked impregnable, was beaten by a direct hit at the non-striker's end.

Conway had begun the day 99 not out and admitted to being nervous overnight, but showed none when he took a single from the first ball of the day to reach his third century in five tests. Conway now has 623 runs in nine test innings at an average of 69.22.

His dismissal brought Taylor to the crease for what is likely to be his last innings in Test cricket. The 37-year-old batter will retire from Tests after this match in which he equals Daniel Vettori's record of 112 test matches for New Zealand.

Given the position New Zealand are in, there is only a slim chance Taylor will bat again in the match. He went to the crease amid loud applause, including from the fielding team, and left after making 28 to similar ovation. The next New Zealand batsman, Henry Nicholls, waited in the dressing room to allow to make his final walk from the crease alone, as the only recipient of the crowd's commendation.