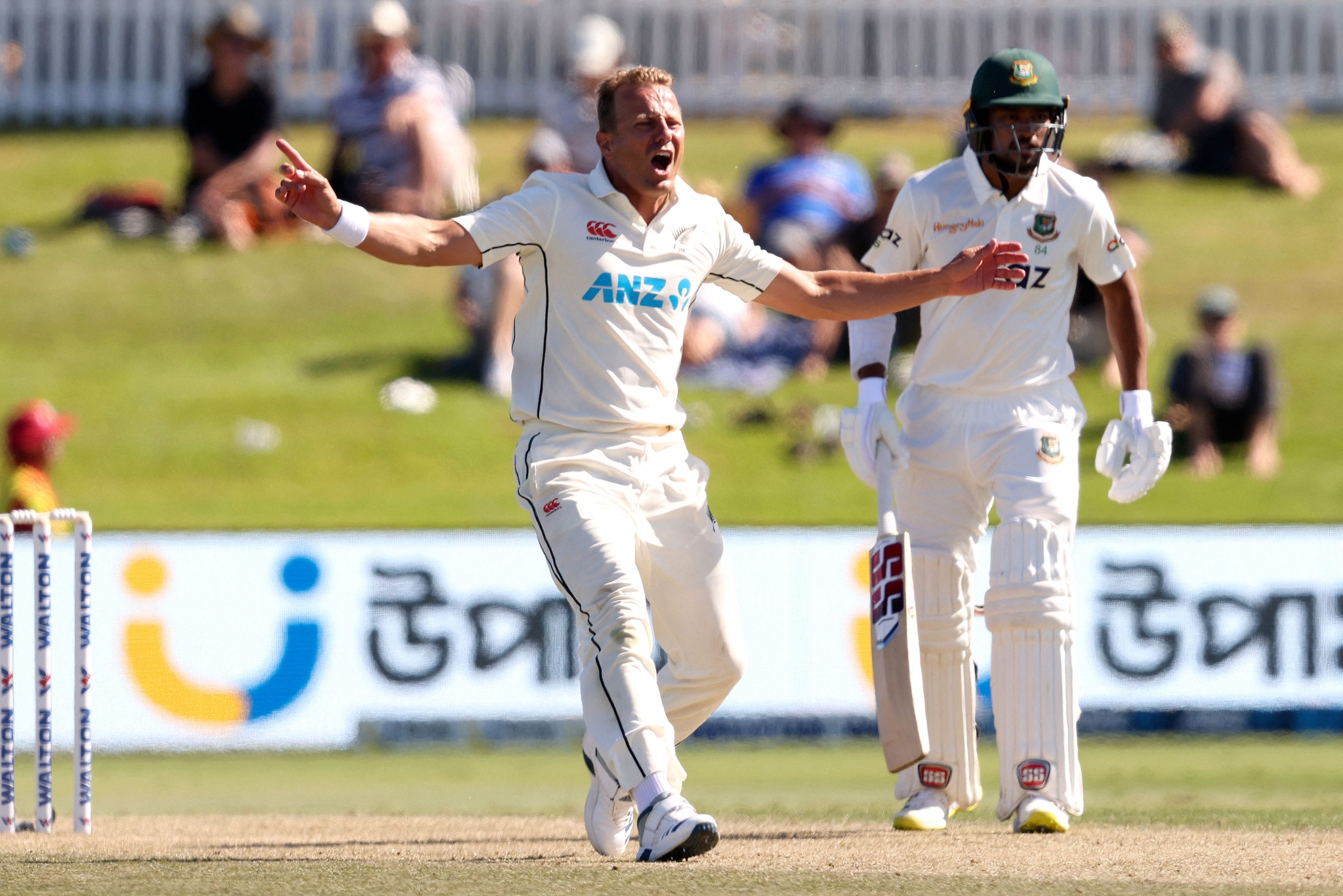 Neil Wagner of New Zealand exults in the Test against Bangladesh. | Photo: AFP

"Full credit to the Bangladesh batsmen. I thought they played really well. They showed a lot of patience. They showed a bit of fight. It is a pretty tough graft out there. It is just a good days' hard and tough Test cricket. We fought and toiled really hard," said Wagner in the virtual press conference.

Wagner, who picked the two Bangladesh wickets falling in the day, backed the hosts to pick more wickets on day three. "Just couldn't really string it together enough and I guess couldn't create enough pressure from both ends. This is cricket and we got opportunity tomorrow to come back and obviously, fight harder, create some early pressure and get some wickets to get ourselves back into it nicely."

Wagner sounded impressed by the batting performances of the young batters in the absence of senior players like Shakib Al Hasan, Tamim Iqbal and a Test-retired Mahmudullah in the playing eleven.

"Bangladesh, whenever they have come here, has been a pretty tough opponent. They have always played well in our conditions. I think the other guys like Shakib played a different brand of cricket. They used to come as quite aggressive and play a few more shots, so that creates opportunities as well and that led us to the opportunities for us to get wickets. Those guys were quality players and have been around for quite some time.

"The younger guys today played phenomenally. I thought they played patiently. They didn't really give too many opportunities. They sort of hung in there. They were prepared to dig in. They left the ball quite a lot. It made us ask more questions, and take wickets. It gave them the opportunity to score. I thought that they played really well. Full credit to them. I thought when the ball was there to be scored, they scored. They also left well and defended well."

Wagner had missed a chance of getting Joy lbw on 20 as New Zealand decided against taking the DRS. But replays later showed that the hosts could have changed the decision.

"There was quite a bit of wind out there today. But there was a good noise. It sounded like an inside edge, I asked if he nicked it, the guys behind the stumps said no. Two guys at my end of the stumps said they heard a noise and thought he hit it. I said if he didn't hit it, I thought it was dead. We all made that collective decision. I think it's part and parcel of the game. Unfortunately, what I heard from the team was other way. It was one of those 50-50 ones, a tough one but not to worry about it."