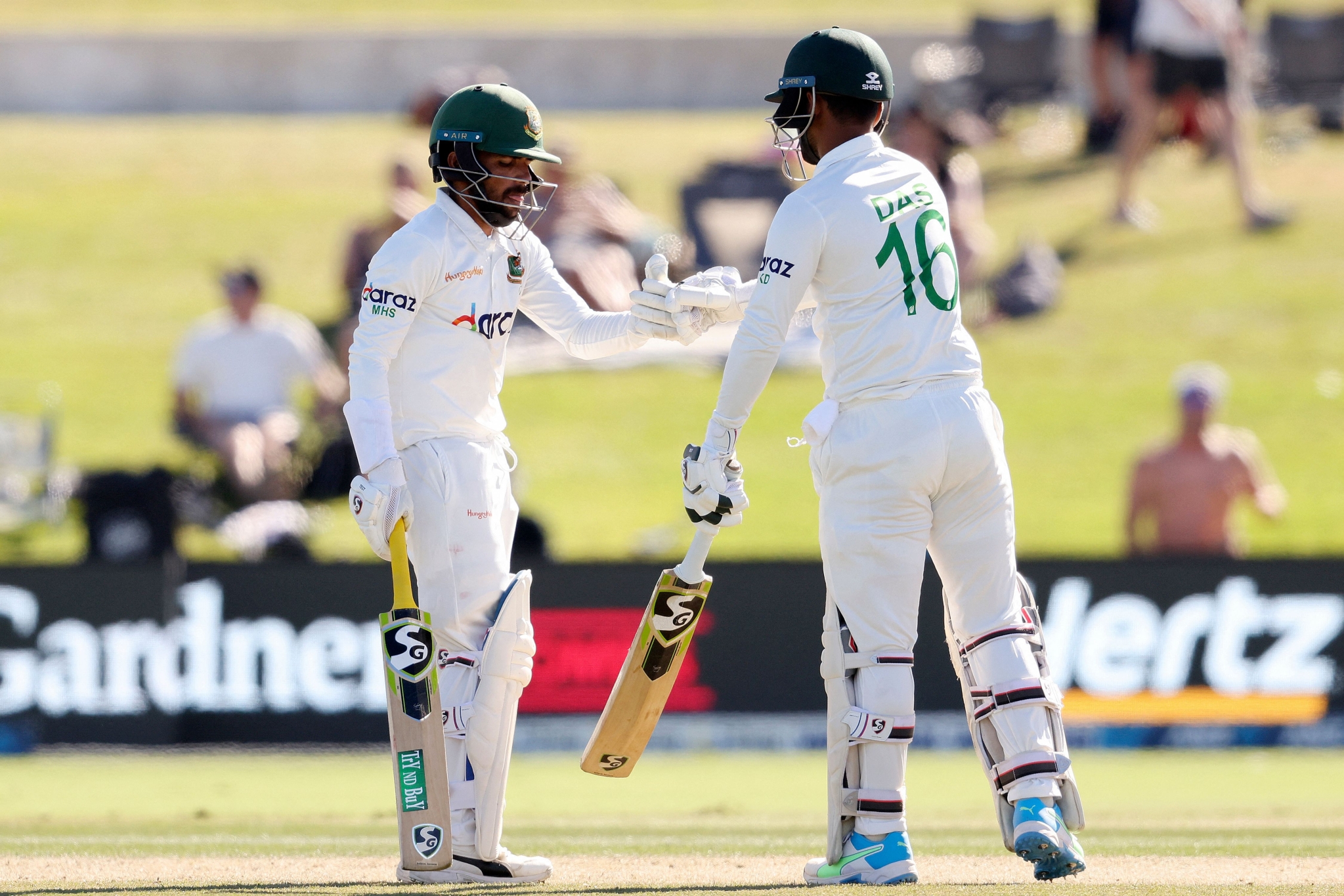 Mominul Haque and Liton Das of Bangladesh during their partnership against New Zealand at Mount Maunganui. | Photo: AFP

Captain Mominul Haque scored 88 to help Bangladesh to a 73-run first-innings lead over New Zealand on Day Three of the first Test on Monday, in one of their best-ever performances away from home.

Mominul shared a 158-run partnership with wicketkeeper Liton Das, who made 86, steering Bangladesh to 401-6 at stumps on the third day in reply to New Zealand's first innings of 328.

Bangladesh have seldom been so commanding in New Zealand, where they has never won a match in any format, or anywhere outside the sub-continent.

It began the day 175-2 with Mahmudul Hasan Joy 70 not out after a 104-run partnership on the second day with Najmul Hossain Shanto (64). Joy was out early for 78 and Mominul and Das then combined in a partnership which occupied the next 52 overs and saw the tourists attain a first-innings lead 20 minutes after tea.

Trent Boult dismissed both Mominul and Das within four overs of each other in the final session to slightly diminish the tourists' commanding possession. But the day belonged to Bangladesh and for the second day in a row they finished with the upper hand.

"We had a good day yesterday but we had to follow it up with another good day and the guys did exactly that.

"There will be two or three guys disappointed that they didn't go on and get three figures. But all in all we had some good partnerships and it was a very good day."

The partnership between Mominul and Liton Das was critical for Bangladesh who, despite their outstanding performance on the second day when they claimed New Zealand's last five wickets for 70 runs and lost only two wickets in two sessions, still had to consolidate their position.

They lost Joy quickly to a tired shot. He followed a ball from Neil Wagner wide of off stump and struck the ball directly to Henry Nicholls at backward point. Had they lost another wicket quickly at that point, all of the hard work of the second day might have been lost.

But the captain and the wicketkeeper dug in and batted together for more than four hours to ensure Bangladesh capitalized on the efforts of the bowlers and of Joy and Shanto.

It wasn't always easy. When he was on nine, Mominul edged a ball from Neil Wagner to wicketkeeper Tom Blundell but was reprieved when television replays showed Wagner had overstepped. The South Africa-born fast bowler nursed a grievance for the rest of the day, during he failed to take another wicket, and engaged in a war of words with Mominul until his dismissal.

Mushfiqur Rahim came and went quickly, bowled by Boult for 12 to leave Bangladesh 203. From then the day belonged to Mominul and Liton Das who were finally separated when Bangladesh were 361-5, already 33 ahead.

Mominul reached his 15th test half century from 147 balls and Das his 11th from 93 balls. His swift scoring increased pressure on the New Zealand bowlers, who have bowled 156 overs.

Mominul finally was out, trapped lbw by Boult on 88 and Das followed, caught by Blundell from Boult's bowling not too far from stumps.