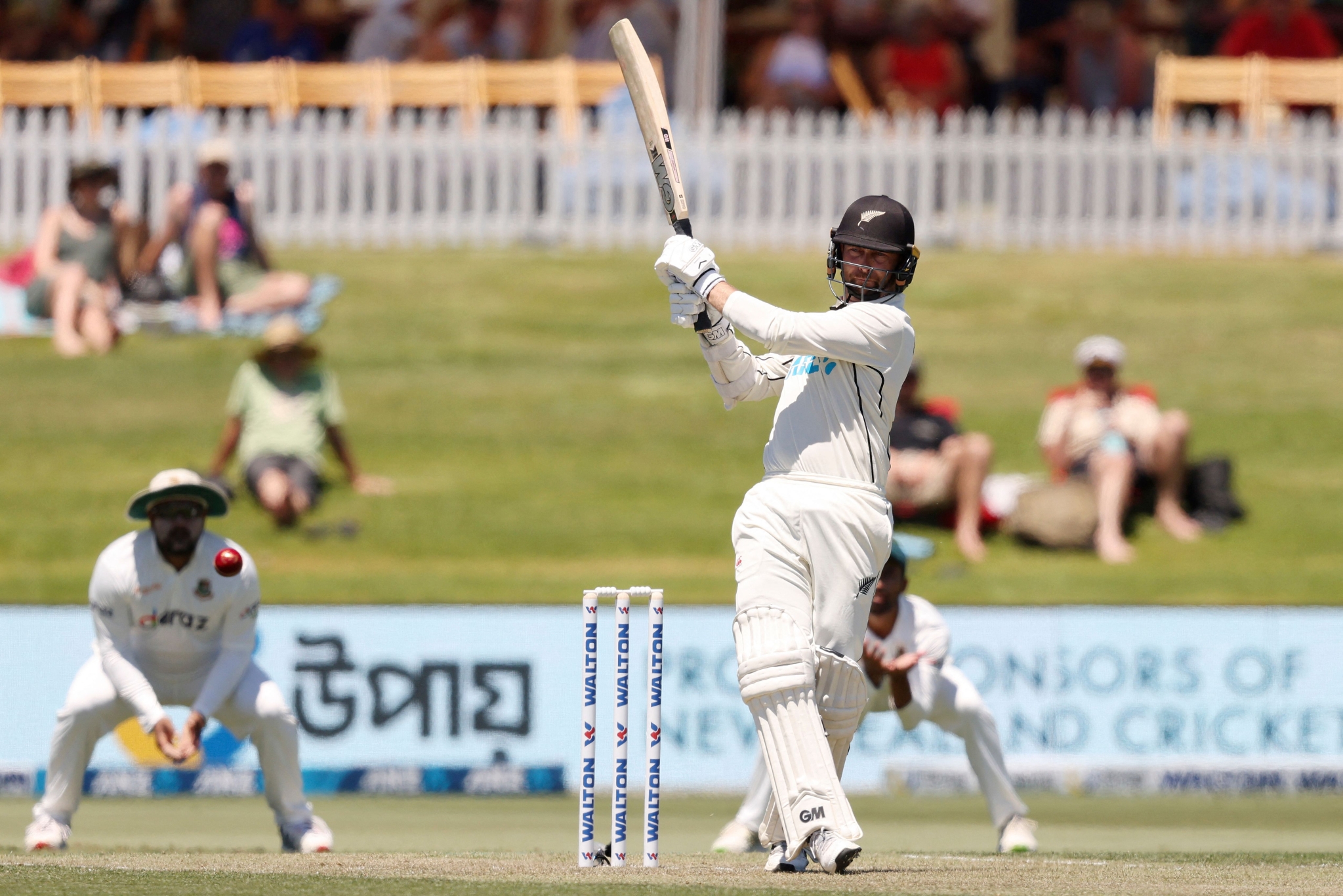 Devon Conway of New Zealand in action against Bangladesh at the Bay Oval in Mount Maunganui. | Photo: AFP

After a brief interruption Devon Conway continued his prolific run-making in test cricket with an innings of 122 which guided New Zealand to 258-5 at stumps Saturday on the first day of the first cricket test against Bangladesh.

South Africa-born Conway erupted onto the international scene in 2021 at the age of 29 with a double century in his first test innings and since has been a stand-out in all three formats. Within the space of four tests he now has scored a double century, a century and two half centuries: 501 runs at an average of 83. He also averages 75 in one-day internationals and 50 in Twenty20s.

A broken hand suffered at the Men's T20 World Cup in November put a brief stop to his accumulation of runs and records. He quickly picked up on Saturday where he left off, placing New Zealand in a strong position at stumps after losing the toss.

Rusty when he commenced his innings after New Zealand lost captain Tom Latham in the fourth over when it was 1-1, Conway navigated the difficult first hour, then flourished, reaching his century after tea from 186 balls.

He seemed impregnable until he was finally out for 122 in the over before the second new ball was taken, to the relatively benign spin bowling of Bangladesh captain Mominul Haque. Stretching forward to an unthreatening delivery which turned down the leg side, Conway got a faint edge which carried to wicketkeeper Liton Das.

Through the day he had partnerships of 138 with Will Young (52), 50 with Ross Taylor who has out for 31 in his penultimate test and 38 with Henry Nicholls who was 32 not out at stumps. Tom Blundell was out for 11 in the last over of the day.

"I think (the pleasing thing) was just the partnerships we had throughout the day. It was nice to spend some time with Ross Taylor in the middle," Conway said.

"It was nice to contribute, especially after not playing for such a long period of time.

"It was challenging. The wicket was quite green this morning and we knew if we got through that tough period it would always get easier to bat on."

The score at stumps didn't fairly reflect the effort of the Bangladesh who worked tirelessly to support the decision of Mominul to bowl on winning the toss. There was moisture in the Bay Oval pitch and Bangladesh seamers Taskin Ahmed and Shoriful Islam were ascendant in the first hour, sending back Latham and troubling Conway and Young.

Hitting good lengths with an upright seam, the bowlers found movement away from the right handers and tied down the New Zealand batsmen who eked out only one run between the first and the ninth overs. Shoriful, who dismissed Latham and later Taylor, had 1-7 from his first five overs.

Conway struggled early, surviving a review for lbw before he had scored and teasing gully with a catching chance soon after.

But as the pitch dried and switched its support from the bowlers to batsmen he settled, then began to flourish. Two fours off Shoriful in the 21st over were a sign of things to come.

He went to lunch on 36 and reached his third half century in four tests from 101 balls with a six from the spin bowling of Mehidy Hasan Miraz in an over in which he also hit two fours.

Conway had put on 138 for the second wicket with Will Young when Young was run out in the 49th over. With the bowlers struggling to find the means to a breakthrough, New Zealand wasted Young's wickets when he set off for a single to mid-wicket and Conway sent him back. An accurate throw to the keeper saw Young run out for a hard-earned 52.