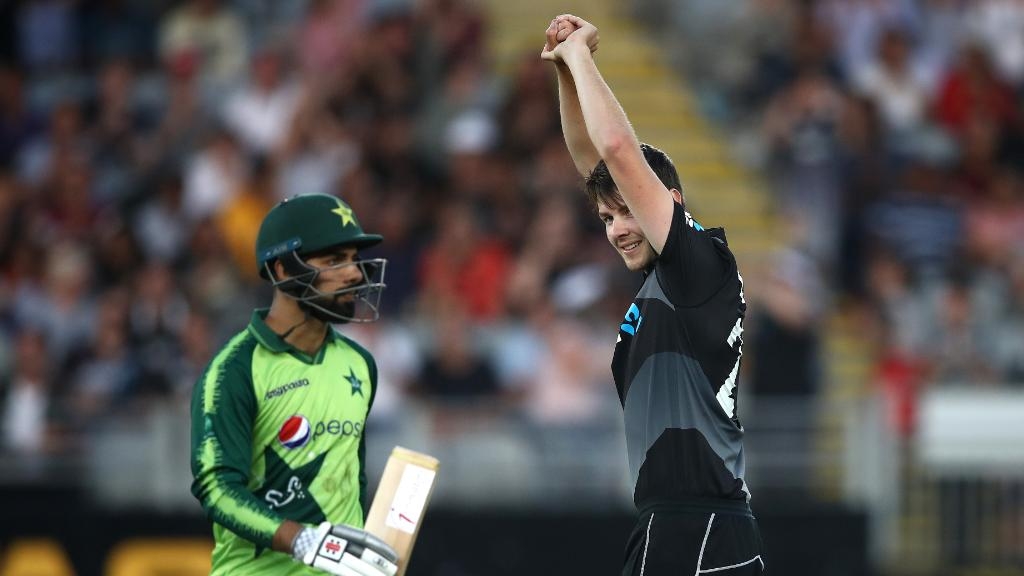 Fast bowler Jacob Duffy took 4-33 on debut for New Zealand in the first Twenty20 cricket international against Pakistan on Friday to set up the home team's five-wicket victory in the opener of the three-match series.

With the impetus Duffy gave its bowling performance, New Zealand had Pakistan 5-39 and restricted it to 153-9 after the tourists won the toss and batted.

Opener Tim Seifert made 57 - his fourth T20 half century - to lead New Zealand's chase at it reached its winning total with seven balls to spare. He had help from Mark Chapman, who made 34, and Mitchell Santner, who was 12 not out at the end.

Duffy, a right armer from Otago province who generates late swing and bounce from an energetic action, took his first wicket with his fourth ball in international cricket and took two more with the fifth and sixth balls of his second over.

Always in the action, he missed his hat trick from the first ball of his third over and was also denied a magnificent outfield catch when he flew high at deep third man to grab a one-hander from the bowling of Blair Tickner only for the television umpire to rule his hand had grazed the boundary rope.

Returning in the 18th over, Duffy took his fourth wicket by dismissing captain Shadab Khan for 42. At that stage, Duffy had 4-13.

"There was a bit of hot and cold stuff in there," Duffy said. "To be honest, on debut I was just hoping not to get hit all over the park." The pitch at Eden Park was a quick one when it was used in the first T20 between New Zealand and the West Indies a month ago. But it was slower Friday and, with the ball stopping, playing shots early was difficult.

Duffy and fellow New Zealand quicks Scott Kuggeleijn and Blair Tickner crowded the Pakistan batsmen with full deliveries and also surprised them with bounce. Determined to play their shots, the Pakistan top order batsmen gave up their wickets cheaply as they hit out before taking the pace of the pitch. Several fell to catches in front of the wicket as the ball held up.

Left-arm spinner Santner bowled the first over and Duffy had the first wicket in the second over when he drew a false shot from Shafique Ali, who was caught at mid-on by Mark Chapman.

With successive deliveries in his next over he dropped a caught and bowled chance, then dismissed Mohammad Rizwan (17) and had Mohammad Hafeez first ball, caught at mid-on.

Kuggeleijn dismissed Haider Ali with the first ball of the next over to complete a team hat trick - three wickets in three balls. He also removed Imad Wasim (19) and Ish Sodhi dismissed Khushdil Shah (16) before Duffy returned to claim the wicket of Shadab, who was caught in the deep by Sodhi.

Pakistan was in trouble at 79-6 but Faheem Ashraf hit 31 from 18 balls to boost the total.

New Zealand also had nervous moments, falling to 2-21 before Seifert and Glenn Phillips (23) put the innings on an even keel. Seifert and Mark Chapman (34) then added 55.