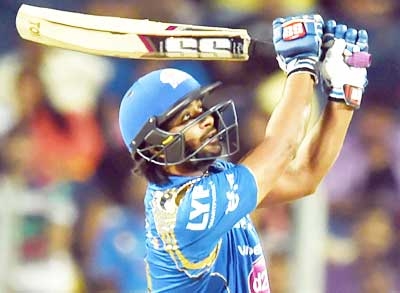 It was brilliant bowling at the backend by Jasprit Bumrah (3/29) and Harbhajan Singh (1/25) that saw MI restrict Supergiants to an unimpressive 159 for five with burly Saurabh Tiwary’s slow 57 off 45 balls being the reason for team’s defeat.

A below-par score was never going to pose any problems for the defending champions who surpassed the target in only 18.3 overs with skipper Rohit smashing an ubeaten 85 off 60 balls.

En route his fifth half-century in 9 games, Rohit hit eight boundaries and three sixes. The sixes were hit effortlessly in the mid-wicket region with last one ending the match. Rohit is now second in run-getters list with 383 runs in nine games and three runs behind David Warner (386 runs).

Having registered their fifth win in nine games, MI jumped to the second spot in the league table with 10 points, right behind Gujarat Lions, who are on 12 points. For Mahendra Singh Dhoni, the sixth defeat in eight games keeps them in the bottom rung with only four points in their kitty. Disastrously enough, they have lost four home games in Pune.

In this tournament, Rohit has tried to change his game trying to anchor the chase with controlled aggression. With Parthiv Patel (21), Ambati Rayudu (22) and Jos Buttler (27 no) making small but useful contributions, it became easy for the Mumbai stylist to take his team to a comfortable victory.

For Supergiants, it will be a catch-up game from now on as they would need to win atleast five if not six games and also expect other results to go their way favourably.

Call it an ignominious record but if Supergiants fail to make it to the last four of the competition, it will be the first time since the inception of the tournament that Mahendra Singh Dhoni led team is not in the knock-out stage.

Earlier, Pune frittered away a rollicking start as they managed only 159 for five against a disciplined Mumbai Indians attack.

While Smith smashed 45 off 23 balls to raise visions of a formidable total but it was burly Saurabh Tiwary whose 57 off 45 balls (4×4, 2×6) turned out to be weaklink in their batting as he wasted a lot of deliveries at the backend of the innings.

It was his painfully slow batting and quest to reach an individual milestone that saw Supergiants get only 66 runs in their final 10 overs after Smith helped them a set a platform in the first 10 overs which saw MI giving away 93 runs.

There was a poor phase in the Supergiants innings as they lost the momentum between overs 11 and 15 scoring only 27 runs in that phase which was the turning point.

Much of the credit should go to Harbhajan (1/25 in 4 overs) for varying the pace and carefully altering the length of his deliveries as none of the batsmen got to chance his arms during those overs. The most successful bowler was Jasprit Bumrah (3/29 in 4 overs) who was economical as well as picked up the wickets of Smith, Dhoni and Tiwary.