Mithali Raj says available for South Africa T20s but will selectors pick her on Sep 5?

The five-match series begins on September 24, while the T20 World Cup is scheduled in Australia in February-March
PTI 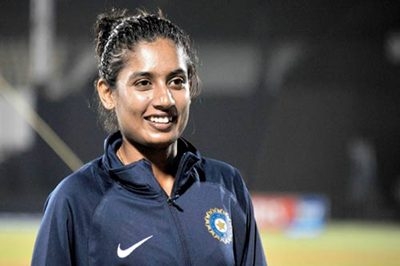 New Delhi: India veteran Mithali Raj on Tuesday made herself available for the upcoming T20 home series against South Africa but with the focus on youngsters ahead of next year's World Cup, the selectors may not pick her.

The five-match series begins on September 24, while the T20 World Cup is scheduled in Australia in February-March. The 36-year-old, who is the ODI captain and remains committed to play the 50-over World Cup in 2021, is not an automatic pick in the T20 eleven.

"I am definitely available for the T20 series next month but, at the moment, haven't really thought about the T20 World Cup. I usually take it series by series," the Indian women's cricket great told PTI when asked about his plans for the shortest format.

The selectors are scheduled to meet in Mumbai on September 5 to pick the squad for the first three T20 Internationals . The series in Surat will be followed by three ODIs in Baroda.

"Mithali has been a great of the game but she needs to decide soon on her T20 career. The T20 World Cup is six months away and the selectors need to try out a few players. And for that, they also need to know what Mithali's plans are. She is also not an automatic pick in the eleven," a BCCI official said. US Open 2019: Sumit Nagal takes a set from Roger Federer before exiting

It has been learnt that the selectors will speak to Mithali about her plans ahead of the team selection.

While India are doing okay in ODIs, they need a lot of improvement in T20s, having lost their previous six games. The team doesn't have much time left to sort out its combinations. After the South Africa series, India travel to the West Indies before playing a tri series in Australia ahead of the T20 World Cup.

Mithali acknowledged the issues facing the team in T20 cricket. "As a team, we still have a lot to catch up on the T20 format but we do have youngsters coming in and with the exposure of T20 leagues around the world they will get more experience and mature faster," she said.

The shortest format is a lot about power-hitting and that is one of the areas India need to improve significantly. "Genetically we can't be like other teams but we can be more smart in our planning and shot selection. We worked very hard on our fitness in the recent camp in Bangalore and you can see the girls are much fitter on the ground and that reflects in their drills," added Mithali.

Speculation has been rife over Mithali's future in T20s ever since she was controversially left out out of the playing eleven for the World T20 semifinals against England last year. There were reports that she would retire after the home series against England in March but ended up playing all three games.