Kohli can be better than Tendulkar: Dominic Cork 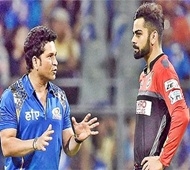 London: Former England fast bowler Dominic Cork has said that India’s star batsman Virat Kohli is capable of matching Sachin Tendulkar’s staggering records in limited overs cricket. “It’s a big statement to say someone could be as successful as Tendulkar but at the moment Kohli is making every bowler look easy to play against,” Cork was quoted as saying by Sky Sports.

Kohli has been in phenomenal form since the World T20 in March-April and has now become the highest run getter in an Indian Premier League (IPL) season besides smashing a record three hundreds while leading the Royal Challengers Bangalore.