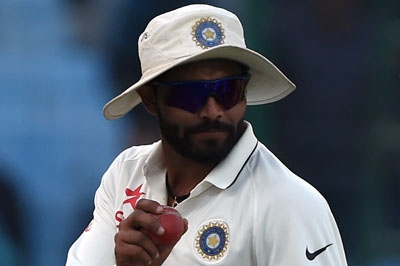 India's Ravindra Jadeja looks on as he leaves the field after the end of the second day of the fourth test cricket match between India and South Africa at the Feroz Shah Kotla stadium in New Delhi on December 4, 2015. AFP PHOTO / Money SHARMA -----IMAGE RESTRICTED TO EDITORIAL USE - STRICTLY NO COMMERCIAL USE ---- |

Dubai : India’s left-arm spinner Ravindra Jadeja has broken into top-10 of the Test bowlers rankings for the first time as he climbed up four places to earn a career-best seventh position, while Ravichandran Ashwin gained a spot to top the all-rounders’ list. Ajinkya Rahane became India’s highest-ranked Test batsman. He has stormed up 14 places to claim a career-high 12th spot. The 27-year-old Jadeja had started the just-concluded Test series between India and South Africa in 30th position. But a consistent performance from him in the series, saw him climb up the ladder. In the final Test match at New Delhi alone, he picked up seven wickets.

Fast bowler Umesh Yadav has also been rewarded for his figures of two for 32 and three for nine as he has vaulted 13 places to achieve a career-best 32nd position in the Test bowlers’ chart, which is continued to be headed by South Africa pacer Dale Steyn. Rahane had entered the Test in 26th spot, but after scoring 127 and 100 not out in his side’s 337-run win over South Africa in the Delhi Test that helped the home side post a 3-0 series win, he leapfrogged his skipper Virat Kohli.

Kohli, on his part, also gained two places to be at 14th. Other Indian batsmen in Murali Vijay (down by four places to 16th) and Cheteshwar Pujara (down by two places to 17th) also figure in the top 20 chart. Ashwin is the other batsman who has improved his ranking post the Delhi Test. Ashwin scored 56 in his only innings, which has helped him move up five places to 46th. With the ball, Ashwin returned figures of two for 26 and five for 61, and though his performance has helped him gain 15 points to reduce the gap with table-topper Steyn to just four points, it has allowed him to move ahead of Bangladesh’s Shakib Al Hasan as the new number-one ranked Test all-rounder.

I have grown in confidence after fiery spell: Yadav

New Delhi: Umesh Yadav’s fiery spell right after tea helped India end South Africa’s vigil in the fourth Test and that spirited effort has given the fast bowler much needed confidence in his start-stop career. Yadav ended with figures of 21-16-9-3. “Throughout my Test career, I have played a match here or a couple there; never really had a few games at the stretch. But after this spell, my confidence has gone really high. I felt that whatever I have learnt so far, whether while playing Test cricket or going back to domestic cricket, I could make it count in this spell,” said Yadav. What was his mindset going into the final session? “I told myself that this is the last Test match I am going to play for the next six months,” he was quoted as saying by bcci.tv. “And this moment – the chance to beat South Africa 3-0 by winning a Test like this – will never come back again. I knew that one wicket would open things up for us. All I wanted was that one wicket.”