Sunil Narine picked up 4/21 and then scored 26 off 15 to help Kolkata Knight Riders knock Royal Challengers Bangalore out
S. SUDARSHANAN 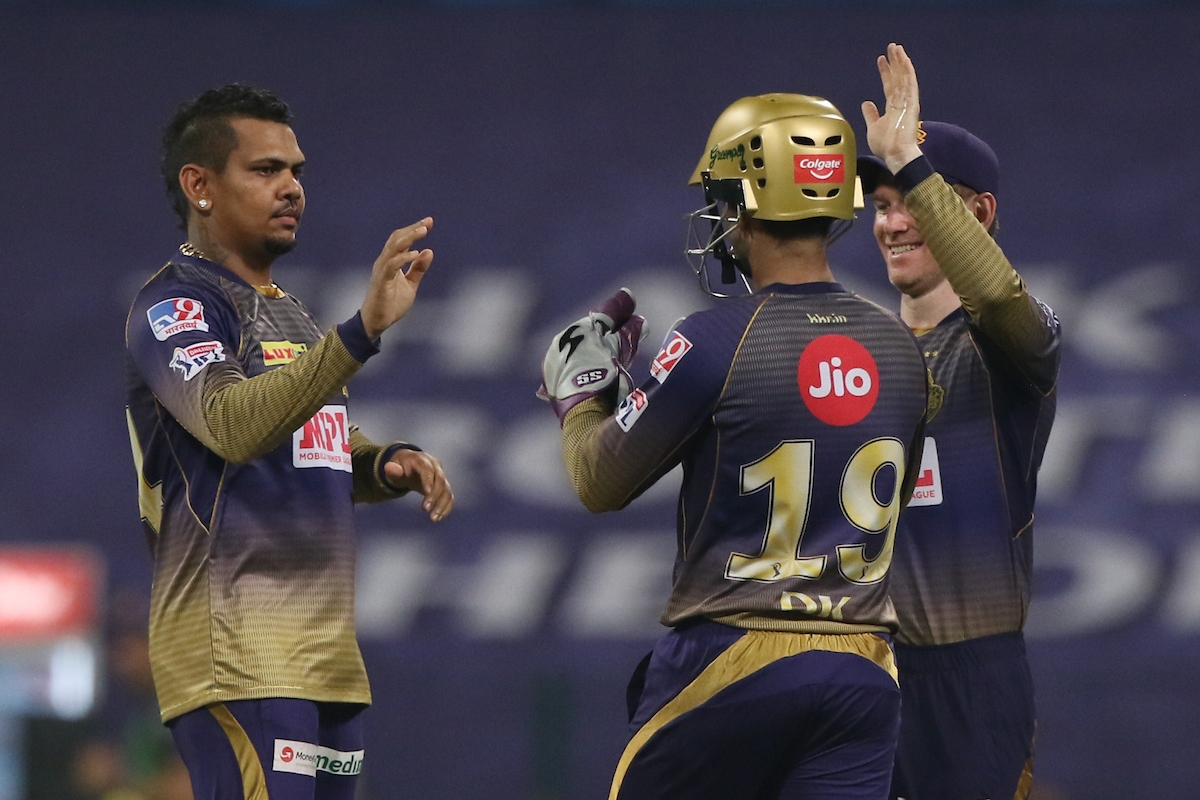 Sunil Narine is a mystery. Not just for the batters but also in the IPL. He played nine matches in IPL Playoffs before Monday (October 11) and had just four wickets to show. His bowling was a whopping 69.

The West Indian spinner changed it all in the Eliminator at the Sharjah Cricket Stadium on Monday picking up four wickets for a mere 21 runs, helping Kolkata Knight Riders make Qualifier 2 for the first time since 2018. And who were the scalps? Srikar Bharat, Virat Kohli, AB de Villiers and Glenn Maxwell. Mystery spinner, indeed.

Kohli had won the toss against KKR and opted to bat. In the company of the young and impressive Devdutt Padikkal, he got Royal Challengers Bangalore (RCB) off to a positive start. He first hit a four through square leg off Shakib Al Hasan in the very first over before hitting back-to-back fours off Shivam Mavi in the next.

Padikkal then hit a couple of fours to welcome Lockie Ferguson to the bowling crease and then passed the mark of 400 runs for the second successive IPL season. The Kiwi had the last laugh, though, as Padikkal chopped one on in the final over of the powerplay.

Bharat, who heroically won RCB their previous game with a last-ball six against Delhi Capitals, struggled to get going and became Narine’s first victim, scoring just nine off 16 balls.

That was also a phase when the spinners were getting a bit of purchase from the wicket while Ferguson got a couple to behave differently. In the six overs after the powerplay ended, RCB could score just 34.

It forced Kohli to attempt an across-the-line hoick against Narine, only to miss it completely and lose his woodwork. He walked back for 39 off 33 balls, becoming the third from his team to score more than 400 in the season.

The stage was set for de Villiers’ pyrotechnics and it looked to be on course when he reverse swept Narine on the third ball he faced. However, the Caribbean bowler yet again reigned supreme, finding the narrowest gap between de Villiers’ bat and pad to bowl him for 11.

Like only RCB can, they went from one for 69 to four for 102. Maxwell also struggled to time his shots well and became Narine’s fourth wicket as he fell for 15. Some wayward bowling towards the end, especially by Mavi, who gave away 12 in the final over, meant that KKR were set 139 to proceed into the second qualifier.

Narine wasn’t done for the evening, though. KKR found themselves at three for 79 at the end of the 11th over when Narine was sent in. KKR needed 60 off 54 balls then.

Shubman Gill was out after an enterprising 18-ball 29. Rahul Tripathi (six) had no clue about Yuzvendra Chahal’s googly. And Venkatesh Iyer (26) was dismissed for a sub-100 strike rate only for the third time in this IPL.

Narine smashed three sixes off three legal deliveries from Daniel Christian in the very next over, helping KKR score 22 off the 12th over. He brought the equation down to KKR needing 38 off 48 balls.

A couple of quiet overs later, Chahal struck once more as Nitish Rana holed out to deep mid-wicket for 23. But it then seemed that Narine would take KKR home in the company of Dinesh Karthik.

Harshal Patel, who dismissed Gill and Iyer to draw level with Dwayne Bravo’s record of most wickets in a season (32), almost had the 33rd, only for Padikkal to spill Narine’s offering.

With 15 needed off the final three overs, Mohammad Siraj cleaned up Narine for 26 to pick up his 50th IPL wicket and 100th in T20 cricket. A ball later, Karthik (10) nicked one to the wicket-keeper to raise RCB’s hopes.

However, with seven needed off the final over, Al Hasan got KKR the decisive four to knock RCB out. KKR will now face the Capitals on Wednesday.