IPL 2021, SRH vs RCB: Who is Umran Malik? All you need to know about Hyderabad's latest debutant

Umran Malik, a right-handed pacer from Jammu and Kashmir is the newest talent who came in as a replacement for T Natarajan
FPJ Web Desk 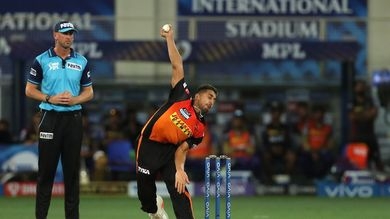 Mumbai: Indian Premier League (IPL) is considered the world's biggest T20 tournament with players coming in from all around the world to participate in this cash-laden contest. Since the beginning of the IPL in 2008, many players, Indian and overseas have become known to the world of cricket by showcasing their talent.

The tournament has given a chance to hundreds of youngsters who were a hidden gem to the world a chance to prove their talent and from there on many have gone ahead and played for their national teams.

Many Indians, especially bowlers have risen from the IPL and were polished by playing games here at home ground. Now, in a recent clash between Sunrisers Hyderabad (SRH) and Kolkata Knight Riders (KKR), a young gun from Jammu and Kashmir stole the show.

Umran Malik, a right-handed pacer from Jammu and Kashmir is the newest talent who came in as a replacement for T Natarajan - who was ruled out of the tournament for SRH after contracting Covid-19. Umran Malik traveled to the United Arab Emirates with the Sunrisers Hyderabad squad in the first week of September.

Malik was handed the cap against Kolkata Knight Riders and the young fast bowler from Gujjar Nagar in Jammu made heads turn with his speed.

Malik clocked 146-plus speed in the very first over, and he entered 150s twice on the speed gun - the only Indian to have done so in the IPL. While the cricket fraternity was excited to see the young bowler and praised his speed, Malik remained calm and composed, thus finishing his four overs, conceding 27 runs.

The youngster has received praises from Indian swing and seam legend Irfan Khan who first met Malik in a training camp in Jammu.

A heartwarming message was shared by the SRH team on Twitter that was sent by Malik's parents upon his seeing him on Television making his debut for the orange army. The post caption read, " “When you make it to one of the biggest stages in Cricket, your family can be nothing but proud.”

Match 52 of the second phase of the UAE leg of the IPL is underway between SRH and Virat Kohli-led RCB here at Sheikh Zayed Cricket Stadium, Malik in his first over bagged RCB wicket-keeper batsman Srikar Bharat conceding just one run.