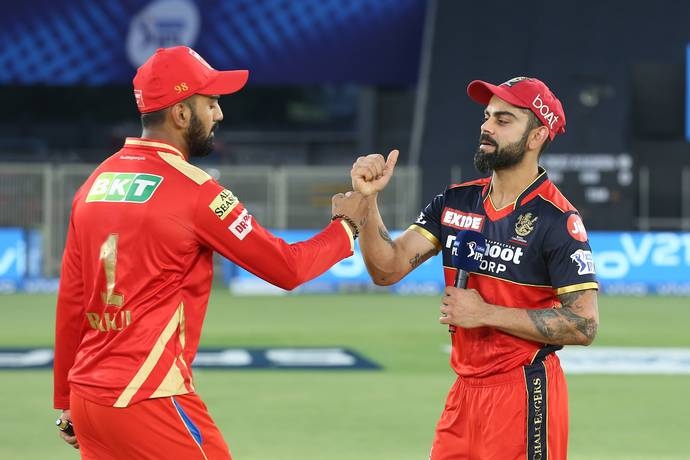 Mumbai: The Sunday blaster will kick off with two matches as the teams make their ways to the qualifiers. Virat Kohli-led RCB will take on KL Rahul-led Punjab Kings in match number 48 here at Sharjah Cricket Stadium.

Both teams have won their previous games and are looking confident as they hope to continue their winning streak. RCB is currently positioned third with 14 points, while the Punjab Kings is placed at number five with 10 points. As the two young captains take on each other in the second phase of the UAE leg of the IPL, here is a look at 5 players in today's match to watch out for:

Mayank Agarwal: Agarwal after missing two games due to unfitness has returned for the Punjab Kings and is looking in form. He has been very consistent in scoring runs for Punjab Kings and so far the highest run-getter after the skipper KL Rahul for his team. In his last game against KKR, Agarwal smashed 40 off 27 balls while his average is 41.33 runs at a strike rate of 143 in this season of the IPL.

Shahrukh Khan: The youngster received a lot of praise from his skipper and on social media from all around for his match-winning performance in the last game where he knocked 22 off just 9 balls and kept the chances alive for Punjab Kings for making it to the qualifier round. The talented right-handed is the perfect middle-order batsman Punjab Kings require at this time.

Glenn Maxwell: After failing many times, the million-dollar baby finally got his form back against Sanju Samson-led Rajasthan Royals by smashing a 30 ball 50. The right-handed Australian batsman known for playing absurd and unique shots is the top run-scorer for RCB so far. In 10 innings, Maxwell has scored 350 runs at an average of 38.88.

Arshdeep Singh: The youngster is proving his worth in the team and after becoming the leading wicket-taker for Punjab Kings. Punjab Kings boosted their chances of making playoffs with a five-wicket win over KKR as effective death over bowling helped their victory and this is the man we can thank. Arshadeep Singh is the highest wicket-taker for the team with 16 wickets in 10 matches.

Harshal Patel: This season has become a bowlers game while the batsmen are proving to be less effective against the young talents on every team. It will be a pacer vs pacer game in the Sunday kick-off as leading wicket-takers for their teams will be up against each other for the purple cap race. Patel is the highest wicket-taker in this season of the IPL with 26 wickets in just 11 games. The match will commence at 3:30 PM IST here at Sharjah Cricket Stadium