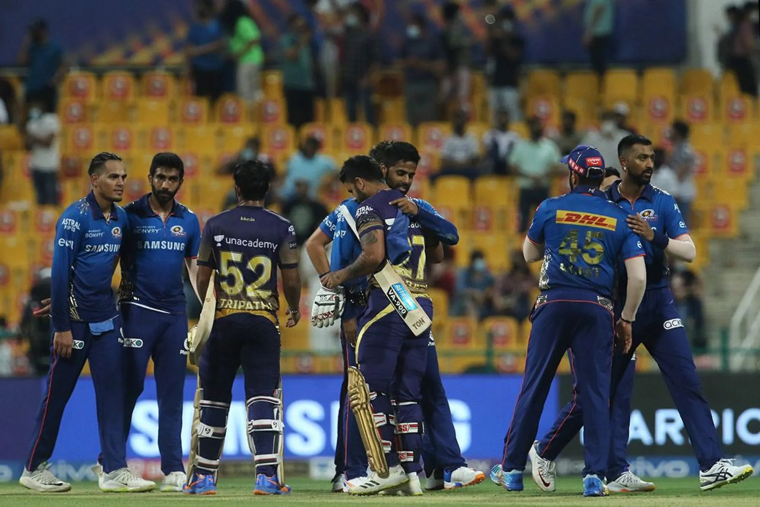 Rookie Venkatesh Iyer left many in awe of his talent as Kolkata Knight Riders produced a clinical performance for the second successive game since IPL's resumption to tame the mighty Mumbai Indians by seven wickets and enter the top-four in the points table here on Thursday. Iyer (53 off 30), playing his second IPL game, displayed the wide range of his strokes alongside Rahul Tripathi (74 not out off 42) to enable KKR to chase MI's modest total of 155 for six with as many as 29 balls to spare.

Quinton de Kock struck an entertaining 55 for MI before KKR bowlers bounced back in the last 10 overs, conceding 75 runs and taking five wickets. Shubman Gill and Iyer gave KKR another flying start with the first two overs bowled by Trent Boult and Adam Milne going for 15 runs each.

While Jasprit Bumrah found Gill's stumps in the third over, Iyer went on to play a memorable knock comprising four boundaries and three sixes. Iyer and Tripathi shared an 88-run stand for the second wicket which completely shut the door on MI, who suffered their second loss since IPL's resumption.

Earlier, MI skipper Rohit Sharma (33 off 30) got off the innings in scintillating fashion, caressing a Nitish Rana delivery on to the mid-off boundary. The skipper, who was in sublime touch in the Tests in England, had not played the opening game against CSK. Here are the top 5 players with the most runs (Orange Cap):

Here are the top 5 players with the most wickets (Purple Cap):