SRH are at the last spot with nine defeats from 11 matches while there is still hope for KKR.
Prateek Chakradhar 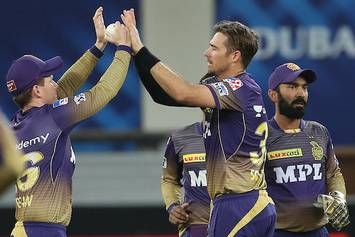 Mumbai: As the Virat Kohli-led RCB book their spot in the top four after its victory over KL Rahul-led Punjab Kings, the Kolkata Knight Riders will be looking to win today's match against Sunrisers Hyderabad as the pressure mounts for Eoin Morgan-led side to make it to the qualifier round. SRH are at the last spot with nine defeats from 11 matches while there is still hope for KKR. The second match is underway in Sunday double dose here at the Dubai International stadium.

The Free Press Journal conducted a poll on Twitter ahead of the match commenced today at 7:30 PM. The poll was conducted to find out which of the two teams will win the battle on the field today.

Poll results show that there are more possibilities of KKR winning the game against SRH as 72.70% of cricket fans have voted in favor of the Eoin Morgan-led side, while only 27.30% are favouring the orange army (SRH).

After winning the toss, SRH skipper Kane Williamson decided to bat against KKR to put pressure by putting up a good total to defend but that did not turn in favour of the batting team as SRH lost both the openers before the powerplay.

A lot more was expected from Wridhiman Shah and Jason Roy, who has come in place of David Warner. Team captain Williamson also lost his wicket right after the overplay in the seventh. KKR is pushing their luck as they need to win the rest of their matches if they want to make it to the knockout round.