Has the IPL seen the last of MS Dhoni and Suresh Raina?
FPJ Web Desk 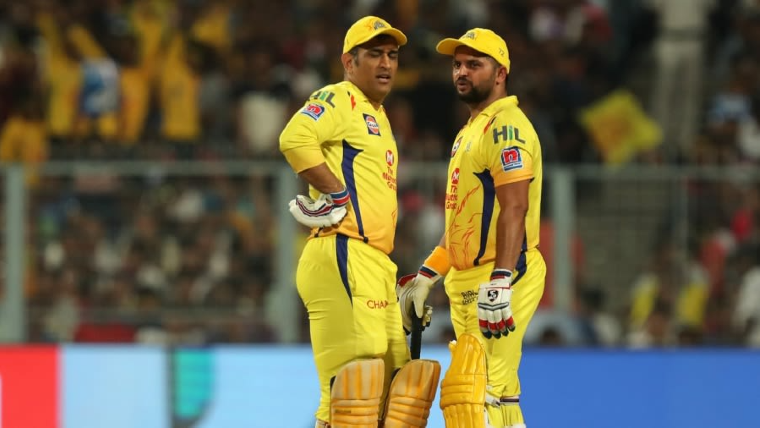 MS Dhoni (l) and Suresh Raina have been constants for CSK. | Photo: BCCI/IPL

The 14th season of the Indian Premier League will conclude on Friday (October 15) with a clash between Chennai Super Kings and Kolkata Knight Riders. CSK are in their ninth IPL final while it will KKR’s third. However, the team in purple have won on both the previous occasions they have made it to the title clash. In 2012, they had defeated CSK, thanks to a superb 89-run knock from Manvinder Bisla.

The final match of IPL 2021 could be the last match in the competition for some of the following players. Although none of them have confirmed or denied it, speculations are rife.

MS Dhoni: The former India skipper had led the team in yellow from its inception. He is the only surviving player from the initial list of marquee players in the IPL. Dhoni has led CSK to three IPL titles and will be eyeing his fourth. This will be the tenth time he will be playing the IPL final – he was part of the Rising Pune Supergiant team that made the final in 2017 – and his experience is second to none.

However, the final could be a good chance for Dhoni to end his IPL career and therefore, his career as a player, on a high. He is on the other side of 40 and even though is fit enough, his returns with the bat have gone down. Moreover, since he doesn’t play domestic cricket, it is a challenge for Dhoni to keep up with the game, come the IPL.

ALSO READ: Five players to watch out for in the IPL 2021 final

Suresh Raina: Raina has been the ‘chinna thala’ to the ‘thala’ that is Dhoni. One of IPL prolific run-scorers, he was leading the run-charts until a couple of seasons ago. While he missed playing the last season, Raina’s return to the CSK unit was welcomed at the start of the season, given their campaign wasn’t the best in 2020. However, with just 160 runs in 12 matches at a strike rate of 125, Raina was left out of the XI before the last three games of the league stage.

Speculations are rife that Raina might have already played his last for CSK and in the IPL, too. He has publicly said that he wouldn’t continue playing once Dhoni hangs his boots, true to his gesture when it came to calling it quits from the international stage. Moreover, his replacement in Robin Uthappa has done well with the bat and should keep his place for the title-clash. With 5528 runs to his credit, Raina is placed fourth in the list of all-time run-scorers in the IPL.

It is highly unlikely that CSK will retain Raina ahead of the mega auction next season. However, there could be a chance of one of the new teams, that are set to enter the competition next season, choosing to have the experience of Raina in their squad. Will we see the once-upon-a-time Mr. IPL again?

Harbhajan Singh: 150 wickets in the IPL, fourth in the list of most wickets taken… But perhaps the league and world cricket has seen the last of Singh. Playing for Mumbai Indians from 2008, Singh was let go of by the franchise after 2017. CSK picked him up in 2018 and played him for a couple of seasons before KKR bought him ahead of the 2021 edition.

In the ongoing season, the off-spinner has featured in only three games and has wicketless returns apart from going for an economy of nine runs an over. Singh also hasn’t played any cricket apart from the IPL for the last couple of years and could be tough to find a buyer in the mega auction. Thank you, Turbanator!

Imran Tahir: Tahir had been Dhoni’s go to bowler in 2018 and 2019. In the second year of CSK’s return, the leg-spinner returned 26 wickets, the most for them. And quite obviously, he ran the most for them!

Tahir has played just one match in the current season and picked two wickets. With only four overseas players allowed in the XI, Faf du Plessis, Dwayne Bravo, Sam Curran, Josh Hazlewood and Moeen Ali were ahead in the pecking order. The 42-year-old was last seen in action in the Caribbean Premier League. With a plethora of leggies available in the Indian domestic circuit, it is tough to see Tahir being picked by any franchise for the next year.

Eoin Morgan: An overseas player as a captain is a touchy topic in the IPL. Should one of the four available slots be blocked because of captaincy? Is that the most prudent of choices given that conditions can vary and form is temporary? Morgan took over KKR’s captaincy mid-season in 2020 and has led them to the final in 2021. However, he has had a forgettable season with the bat.

Perhaps KKR’s qualification to the title-clash meant that he kept his place and job. The dubious records of being the joint owner of the most ducks in a season plus having the most single digit score in an edition of the IPL belong to Morgan. Unless he changes his fortunes with the bat in the T20 World Cup and the internationals England play, it is hard to see buyers for the English skipper, given more able batters like Joe Root, Sam Billings and the likes are either without an IPL contract or unable to make the XI of IPL teams.