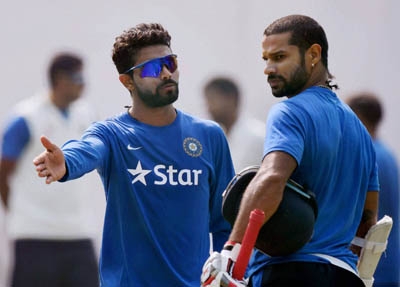 Mohali: India's Ravindra Jadeja chats with Shikhar Dhawan during a practice session ahead of the first Test match against South Africa in Mohali on Wednesday. PTI Photo by Manvender Vashist(PTI11_4_2015_000027B) |

Mohali : Outwitted in both the T20 and the ODI cricket series, India will seek redemption in the Test format by trying to spin a web around the formidable South Africans in the four-match series starting here today. India failed to make use of the home advantage in the limited-overs games while the South Africans displayed remarkable adaptability to emerge the better of the two teams so far. In today’s match, Virat Kohli’s men would take the field without pace spearhead Ishant Sharma, who is serving a one-match ban for his aggressive outbursts during the away series against Sri Lanka.

Therefore, India will be relying heavily on their spin brigade to out-manoeuvre the potent opposition batting, which has been sublime to say the least. With Ravindra Jadeja back in the mix of things, Kohli will be looking to go with three spinners at the PCA track, hoping to pose a threat to the visitors. Premier off-spinner Ravichandran Ashwin, who missed the last four ODIs with a side strain he suffered in the opening game in Kanpur, seems to be fit and raring to go. Having been India’s strike bowler in the Test series win in Sri Lanka, Ashwin, who bagged 20 wickets against the Island nation, will be key to the home team’s chances with opposition players like Faf du Plessis and Dean Elgar acknowledging the in-form spinner’s threat. Team Director Ravi Shastri though has asserted that even Amit Mishra and Jadeja, who has been in stellar form in the current Ranji season, will be crucial to the home side’s fortunes. Playing for Saurashtra, Jadeja, whose last Test appearance was against England last year, has bagged 38 wickets in four games to win back the selectors’ trust.

His left-arm slow bowling, combined with Mishra’s leg-spin and Ashwin’s offies could turn out to be the much-needed winning formula for the hosts on what seems to be a track that will favour the home team’s strength. On the batting front, India will be spoilt for choices on with Shikhar Dhawan, Murali Vijay, Cheteshwar Pujara and Rohit Sharma fighting it out for the top-order slots. Speaking highly of Dhawan and his 187 against Australia at the same venue in 2013, Shastri said, “Getting runs at a venue in your last Test match, nothing like it. But the biggest mistake people make is that they mix Test and ODI form. Test match form he comes back at the back of two Test hundreds, so he is very much in form, he is hot. “That 187 against Australia will certainly be in his mind. Competition for places, nothing like it. It goes to show everyone is on his toes, nobody will rest on his heels. If you miss out somebody else will grab the opportunity. It’s healthy.”

South Africa, on the other hand, will be a tad worried about the form of Hashim Amla, who takes over as captain for the Test format. In contrast, ODI captain AB de Villiers, termed Superman by former Indian captain Sunil Gavaskar, seems to be in the form his life and his wicket will certainly be a prized scalp for the Indian camp. South Africa rode on three ODI hundreds from their skipper to clinch the five-match series 3-2, while they won the three-game T20 rubber by a 2-0 margin. Dean Elgar, Stiaan van Zyl and Faf du Plessis also add muscle to their batting while Temba Bavuma is expected to fill in the large shoes of Jean-Paul Duminy, who is still recovering from his hand injury picked during the third ODI. The Proteas attack rests on the broad shoulders of speedster Dale Steyn and Morne Morkel while the spin force is led by the in-form Imran Tahir.

Tahir is not unfamiliar with sub-continent tracks and after making an impression for Delhi Daredevils in the IPL has become South Africa’s trump card on a turning wicket. The Amla-led squad will also be tempted to field an extra spinner even if it’s the inexperienced offies in Simon Harper and Dane Piedt. With numbers on their side, the world No.1 South Africa start favourites on paper but considering that India are playing in their backyard, the series could well be an evenly contested battle. The Proteas are on a roll with a formidable run in the last seven years in the longer format and are looking to become the first international team to win in every format in India. Even the head-to head count tilts comfortably in favour of South Africa as they lead with a 13-7 margin in 29 matches. When the Proteas last visited India for a Test series in 2009-10, the rubber stood drawn at 1-1, but the South Africa did get the better of the hosts way back in 1999-2000. The last series played between the two sides was won by hosts South Africa by a 1-0 margin in 2013-14.