India have learnt how to win World Cups: Gary Kirsten 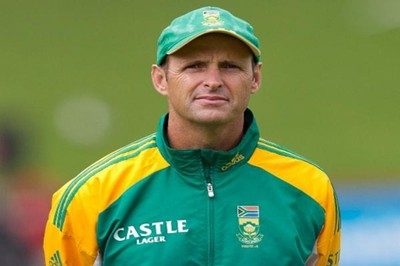 New Delhi : Despite the pessimism over India’s prospects at the cricket’s 50-over showpiece event, former coach Gary Kirsten feels the side has a good chance to defend the title as it has “learnt how to win World Cups”. I think there is a lot of pessimism around their opportunities but they have learnt how to win World Cups, so they know how to do it. This World Cup boils down to three games, its that simple — quarters, semis and finals”, he said.

“They have been there, so they know how to manage that space. And I think they have a good chance,” Kirsten told PTI in an exclusive interview on the sidelines of the ‘Royal Stag Barrel Select Perfect Strokes’ event, here. Kirsten, who coached India between 2008-11 and was carried on the shoulders of Suresh Raina, Yusuf Pathan and Virat Kohli when India won the Cup at Wankhede four years back, feels that the Men in Blue should be wary of arch-rivals Pakistan in their opening encounter in Adelaide on Sunday.

Pakistan have these players who you don’t know about but they do something. You look at their team sheet and say whose that and whose that and next thing is that he is doing something. So I don’t think you can ever write off a Pakistan team. I think it will be very dangerous to do that,” said the former South African cricketer.

On the presence of pressure in the high-voltage contest between the arch-rivals, Kirsten believes that both teams will feel the heat of their opening game. “It’s their first game of the World Cup, so they are both going to be under pressure. Everyone wants to win their first game to take the pressure off a little bit. And obviously because its such a long and great rivalries of sport, the teams are going to feel the heat that’s for sure,” said Kirsten.

The team has been come under immense criticism for their poor bowling and lacklustre batting after going down in the Test series against Australia and the the tri-series that followed, but Kirsten opines that they have a strong batting line-up. “I think they have a great batting line-up. I think it just needs to click and sometimes it misfires, but if they comeback they have enough quality in their batting to be a factor in this World Cup.

“So you have Kohli coming good, Rohit Sharma has got great skill, great talent and you got a Raina there and you got a (MS) Dhoni there and I mean these are all good players and you know there is no reason why they can’t come good”,he said.

Dhoni has tinkered with Kohli’s batting order in the ODIs against Australia and England but Kirsten likes the top-order batsman at the number three position. “To be honest I like him (Kohli) at three. The success he has had in that position, what he has got 21 ODI centuries batting in that slot. Well if I had a batsman with 21 ODI hundreds, I would keep him at three,” said Kirsten. On the bowling front, Kirsten, who represented South Africa in 101 Tests and 185 ODIs in his decade long international career, said that the Indians should stick to their strengths.

I think you just got to keep it simple and understand what your strengths are and go with that. Don’t try anything different, just go with your strengths and get the best out of that,” said Kirsten. Dhoni and company may have come under the scanner in the recent past, but Kirsten firmly believes that the Men In Blue have done pretty well since his departure after the 2011 World Cup. “I think they have done pretty well, haven’t they. They won the Champions Trophy 18 months ago and then they went to the final of the World T20, so I think they have done really well. They built a new team, I have been impressed that they have pulled in a lot of new players and done well,” he said.