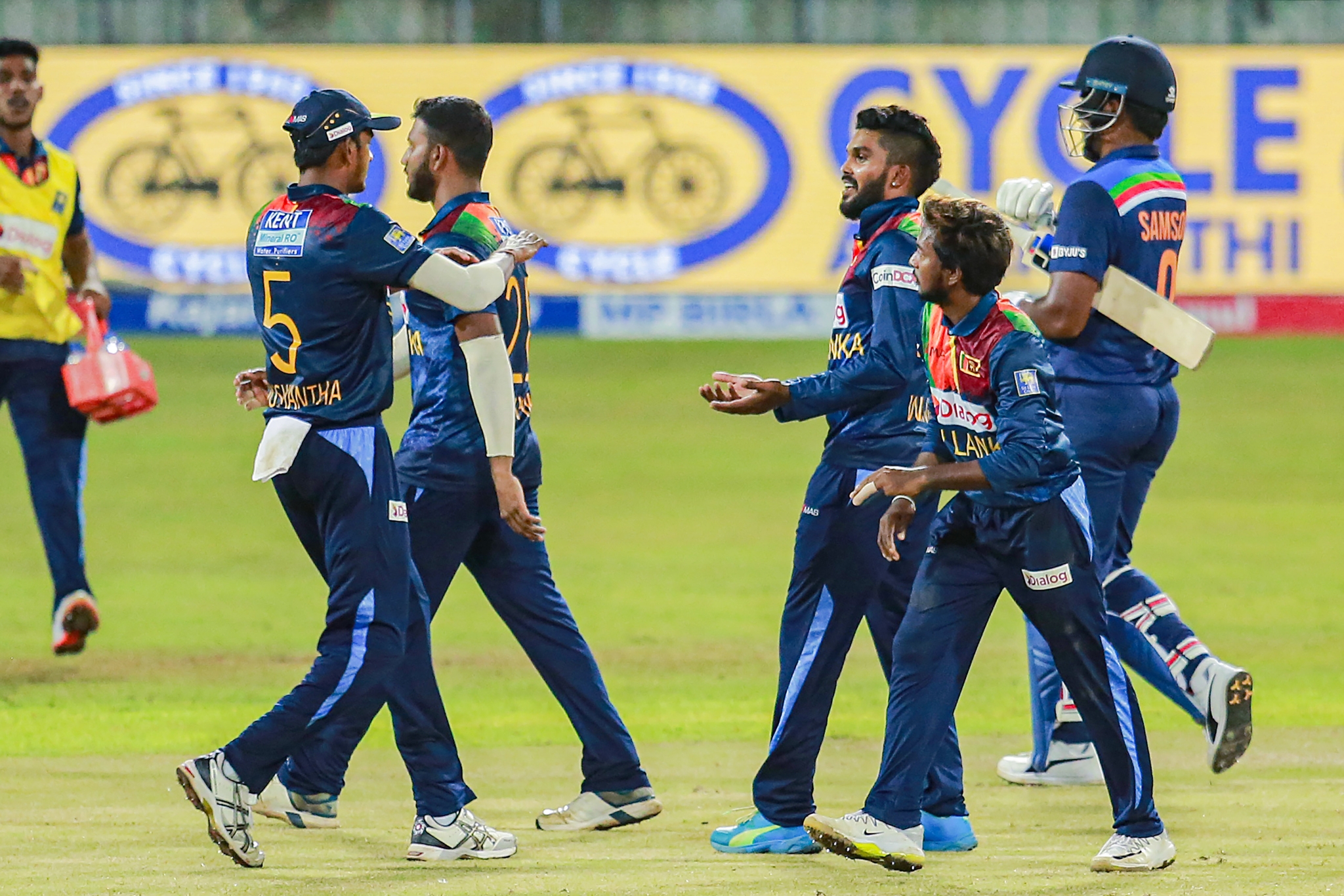 Colombo: A depleted Indian team, playing with only five batsmen, could not defend a modest target of 133 despite a valiant effort from its players as Sri Lanka kept the three-match series alive with a four-wicket victory in the second T20 International here on Wednesday.

With nine players unavailable after Krunal Pandya tested positive, India had no option but to play with six specialist bowlers, including one pacer Navdeep Saini, who wasn't even given a single over.

Dhananjaya de Silva (40 not out) anchored a tricky Lankan chase after India scored 132 for five. The hosts won with two balls to spare.

Vice-captain Bhuvneshwar Kumar (1/21 in 4 overs) was economical till Chamika Karunartne launched his full-toss for a six. The 12 runs from that over brought the equation down to 8 runs off final overs which was very difficult for debutant Chetan Sakariya to defend.

If one bowler despite figures of 2/30 will be annoyed is Kuldeep, who was brilliant but was let down by his fielders, who dropped a couple of catches. Some poor effort in the outfield also spoilt his figures.

Yadav outfoxed opposition skipper Dasun Shanaka by shortening the length of his stock delivery -- the one that turns into the right-hander drawing him out and Sanju Samson effected a smart leg-side stumping.

Minod Bhanuka (36 off 31 balls) also tried to fetch a widish tossed up delivery outside the off-stump and holed out at deep mid-wicket just after Bhuvneshwar had dropped one while running backwards when he skied one against the turn in the cover region.

Varun Chakravarthy (1/18 in 4 overs) also was impressive but the total became their undoing.

Earlier, India struggled for momentum against the Sri Lankan spinners on a sluggish track, managing 132 for five.

Debutant Devdutt Padikkal, though, in his brief innings gave a glimpse of a bright future.

The degree of difficulty could be gauged by the fact that only seven boundaries and a six was hit in 20 overs with as many as 42 dot balls consumed by the visiting team batsmen.

Skipper Shikhar Dhawan (40 off 2 balls) aware of a thin-on experience batting line-up had a cautious approach on a track where ball simply refused to come onto the bat and improvisation was the order of the day.

With heavy rain slowing the outfield, run-making became an ordeal but young Padikkal (29 off 23 balls) was elegant as usual before a moment's indiscretion did him in.

The other much-anticipated debut of Ruturaj Gaikwad (21 off 18 balls) also ended in a whimper when a Sri Lankan captain Dasun Shanaka's short ball climbed on him and he got himself in a tangle while playing a pull-shot that went straight-up after for Minod Bhanuka.

Knowing that only five batsmen are playing on the day, Dhawan had to cut down on risky shots even though a cover drive, an on-drive and a slog-pull behind square were there among his five fours before off-spinner Dananjaya de Silva (2/13) got him to play the slog-sweep.

But the man who impressed the most was Padikkal, who slog swept Dhanajaya de Silva for a six, ran well between the wickets during his 32-run stand with skipper Dhawan and brief one with Sanju Samson.

He also reverse swept Wanindu Hasaranga (1/30) for a boundary before a non-existent slog-sweep brought about his downfall.

Some of his strokes didn't reach the boundary but the Bengaluru boy showed that he has the temperament required for the highest level.

But the player, who once again blew away an opportunity was Sanju Samson (7 off 13 balls). He was hoodwinked by a leg break from Akila Dananjaya (2/29) and was bowled.

Samson has now blown away nine chances in T20 Internationals and is unlikely to get too many more after Thursday's final game.