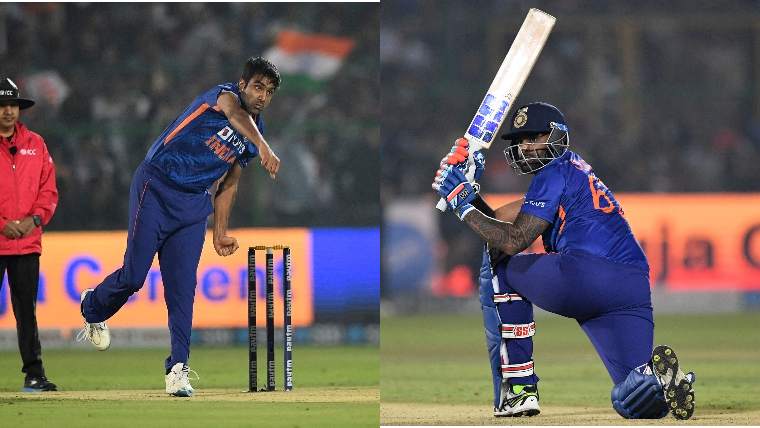 From left to right: Ravichandran Ashwin and Suryakumar Yadav in action for India against New Zealand. | Photo: AFP

India were on cruise mode. They needed a mere 23 off the last four overs and a set Suryakumar Yadav in the middle with Rishabh Pant and eight wickets in the hut. However, some clever bowling from New Zealand from that point coupled with some inept batting towards the end meant that India eventually crept home to a five-wicket win with just two balls to spare in the first T20I at the Sawai Mansingh Stadium in Jaipur on Wednesday.

Yadav's third T20I fifty and his 59-run second wicket partnership with India captain Rohit Sharma helped set a base for India in the chase after Ravichandran Ashwin and Bhuvneshwar Kumar picked up two wickets apiece to keep the Black Caps to 164 despite fifties from Martin Guptill and Mark Chapman.

Yadav showed his wares pretty early in his innings. He looked at ease against a Mitchell Santner, high on confidence after dismissing KL Rahul (15) and ending the 50-run opening partnership. Sharma, at the other end, was chugging along at a decent rate, having hit Tim Southee, New Zealand's captain, for two fours and a six in an over. He repeated the treatment to Trent Boult as well in the powerplay.

Todd Astle came in Yadav's firing line as the no.3 batter first hit a six off Astle's last ball of the second over before tearing into him in his third with a six and a four. Yadav covered up for Sharma, who slowed down after the initial six overs.

In the 14th over, Boult was brought back for his third and he duly dismissed Sharma for 48 off 36 balls - a slowed bouncer was mistimed to short fine leg. Yet Yadav kept India in the hunt, hitting at least one boundary a over till the 15th. He completed his fifty off just 34 balls, playing his trademark scoop over fine leg for half a dozen.

The 15th over, bowled by Southee, went for 15, with Pant hitting a four and Yadav hitting two. However, a cheeky attempt at a scoop against a full Boult delivery saw Yadav lose his stumps and walk out for 62 off 40.

It was then that both Shreyas Iyer and Pant struggled to find the tempo and the former fell for five off eight balls, leaving India needing 10 off the final over. Debutant Venkatesh Iyer hit a four before an outrageous reverse scoop off medium pacer Daryl Mitchell saw him depart. However, Pant finished the win for India with an aerial hit over mid-off.

Earlier, New Zealand were off to a bad start as they lost the wicket of Daryl Mitchell in the first over, after being asked to bat first. An outstanding in-swinger from Kumar found the gap between Mitchell's bat and pad before crashing into the stumps.

The wicket brought Chapman to middle and he along with Guptill revived the New Zealand's innings. The duo punished the bad deliveries to keep the scoreboard ticking, taking Kiwis to 41 for one at the end of the powerplay.

Both batters efficiently rotated the strike and didn't go for big hits between overs six and ten. On the other hand, Indian bowlers struggled to find a breakthrough and conceded few occasional boundaries, as New Zealand reached 65 for one at the halfway mark of the innings.

With ten overs to go, Guptill shifted gears and targeted Mohammed Siraj, scoring 16 runs in his over. In the next over, Chapman scored his impressive half-century by slamming Axar Patel's full-toss for a huge six over deep square. Deepak Chahar was hit for 10 runs as Chapman and Guptill brought their 100-run partnership, taking Black Caps to 106/1 after 13 overs.

India were in desperate need of a breakthrough as Ashwin provided that by getting rid of the dangerous Chapman, who was looking for a big shot but the ball crashed into the stumps. Glenn Phillips came to bat next but he couldn't do much and was dismissed by off-spinner in the same over, leaving Kiwis in some sort of trouble.

However, the quick wickets did very little to deter Guptill as he kept on playing his lofted shots and scored his 19th T20I fifty, first against the Men in Blue in the shortest format. His partner on the other side, Tim Seifert was dropped on 7 by Patel in the over bowled by Kumar.

With Guptill set, Black Caps were eyeing a big total but Chahar dismissed the attacking opener in the 18th over. Guptill mistimed his shot while trying to go over mid-wicket as Shreyas came running in and took a good low catch.

From there, Indian bowlers didn't give any freebies to Tim Seifert (12) and Rachin Ravindra (7) and Santner (4) and pulled things back in the death overs.