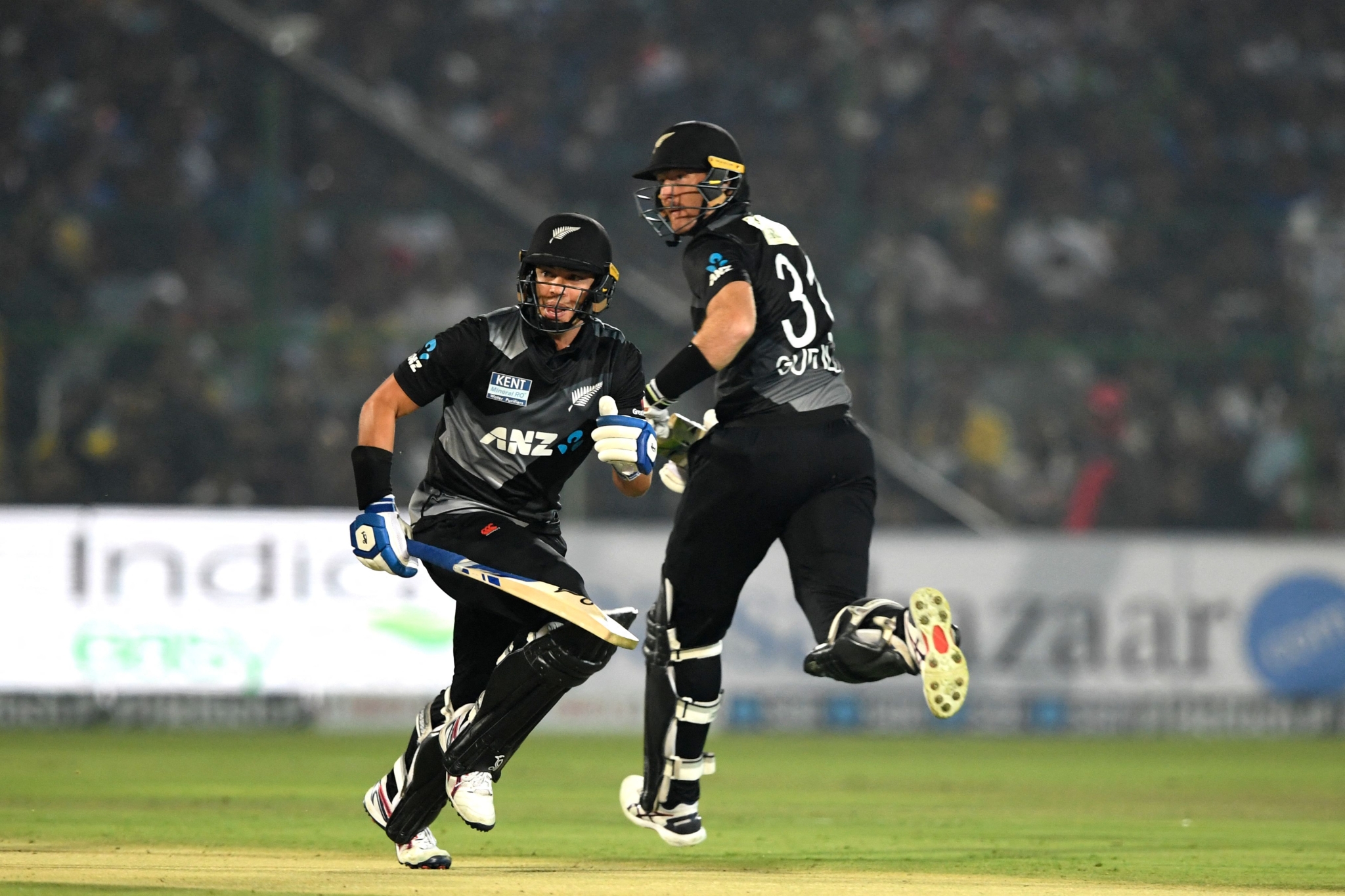 Mark Chapman (l) and Martin Guptill during their partnership for New Zealand against India. | Photo: AFP

Half centuries from Martin Guptill and Mark Chapman helped New Zealand post 164 for six in the first T20I against India in Jaipur on Wednesday. Seamer Bhuvneshwar Kumar and off-spinner Ravichandran Ashwin picked two wickets each for the hosts.

Asked to bat first, New Zealand were off to a bad start as they lost the wicket of Daryl Mitchell in the first over. An outstanding in-swinger from Kumar found the gap between Mitchell's bat and pad before crashing into the stumps.

The wicket brought Chapman to middle and he along with Guptill revived the New Zealand's innings. The duo punished the bad deliveries to keep the scoreboard ticking, taking Kiwis to 41/1 at the end of the powerplay.

Both batters efficiently rotated the strike and didn't go for big hits between 6 to 10 overs. On the other hand, Indian bowlers struggled to find a breakthrough and conceded few occasional boundaries, as New Zealand reached 65/1 at the halfway mark of the innings.

With ten overs to go, Guptill shifted gears and targeted Mohammed Siraj, scoring 16 runs in his over. In the next over, Chapman scored his impressive half-century by slamming Axar Patel's full-toss for a huge six over deep square. Deepak Chahar was hit for 10 runs as Chapman and Guptill brought their 100-run partnership, taking Black Caps to 106/1 after 13 overs.

India were in desperate need of a breakthrough as Ashwin provided that by getting rid of the dangerous Chapman, who was looking for a big shot but the ball crashed into the stumps. Glenn Phillips came to bat next but he couldn't do much and was dismissed by off-spinner in the same over, leaving Kiwis in some sort of trouble.

However, the quick wickets did very little to deter Guptill as he kept on playing his lofted shots and scored his 19th T20I fifty, first against the Men in Blue in the shortest format. His partner on the other side, Tim Seifert was dropped on 7 by Patel in the over bowled by Kumar.

With Guptill set, Black Caps were eyeing a big total but Chahar dismissed the attacking opener in the 18th over. Guptill mistimed his shot while trying to go over mid-wicket as Shreyas Iyer came running in and took a good low catch.

From there, Indian bowlers didn't give any freebies to Tim Seifert (12) and Rachin Ravindra (7) and Mitchell Santner (4) and pulled things back in the death overs.