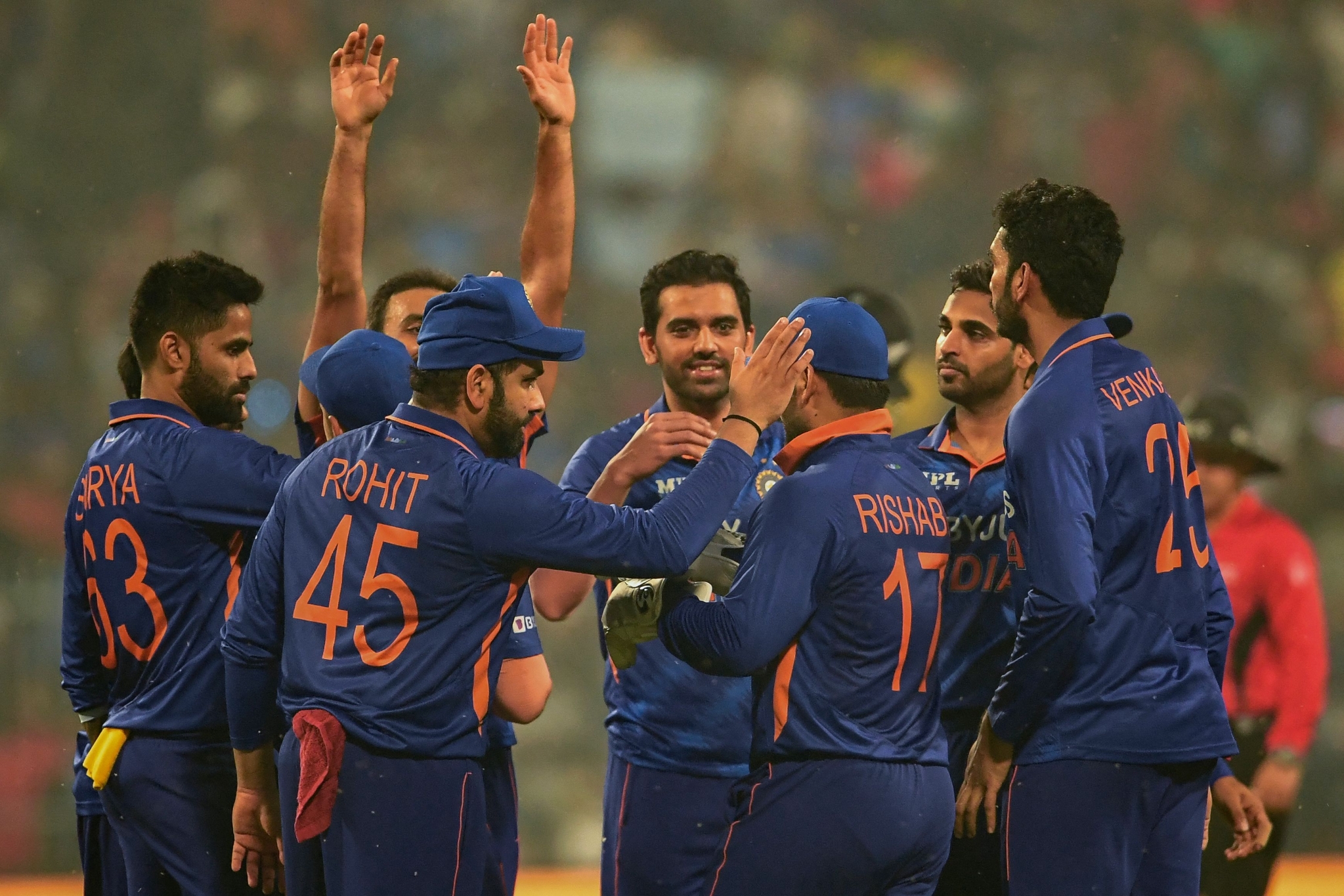 New Zealand's last bilateral T20I series against India resulted in a 5-0 whitewash at home last year. India yet again registered a clean sweep against New Zealand, winning 3-0, thanks to a 73-run win in the final T20I at the Eden Gardens in Kolkata on Sunday.

Dew has been a major factor in second innings during the series as well as during the Men's T20 World Cup over the past few weeks. But Axar Patel was perhaps oblivious to all of it, returning three for nine in his three overs. Harshal Patel, on the other hand, struck twice towards the end of the innings, bowling New Zealand out for 111. This was after Rohit Sharma's attacking 56 combined with Harshal and Deepak Chahar's lower order cameos helped India post a tall 184 for seven.

Axar came into the attack in as early as the third over, after Chahar's over went for 21. The left-arm spinner struck on the very first ball when Daryl Mitchell (five) miscued one to covers. The going got that bit tougher when Mark Chapman, who looked in good touch in the series, slinked down the track a couple of balls later to be wonderfully stumped by Rishabh Pant for a duck.

Martin Guptill though seemed like batting in a different game. Having hit Chahar earlier, the Kiwi opener welcomed Yuzvendra Chahal, playing his 50th Test having replaced R Ashwin, with a massive six. Although Axar got his third wicket when Glenn Phillips played an ill-advised reverse sweep to be clean bowled, Guptill hit another six off Bhuvneshwar Kumar in the final over of the Powerplay.

Chahal's second over was also an expensive one with Guptill yet again targeting the leggie. He brought up his 20th T20I fifty, second in the series, before holing out to long on off Chahal for 51, leaving New Zealand reeling at four for 69 in the 11th over.

With India using the additional bowling option of Venkatesh Iyer also, it was only a matter of time before they put the game beyond the Black Caps' reach. A couple of sharp and accurate throws from Ishan Kishan also caught the Kiwi batters short. Lockie Ferguson (14) struck a couple of meaty blows towards the end before being the last man to fall.

Opting to bat first in the final game, Sharma and Kishan, replacing KL Rahul, got India off to a flying start. While the southpaw was trying to hit hard, the Indian captain got off the blocks very quickly, hitting Trent Boult for a six and then following it up with one off Lockie Ferguson. He hit Ferguson, who had come in for Tim Southee, for another maximum in the last over of the Powerplay as India had rollicked to 69 for none.

Stand-in captain Mitchell Santner brought himself on as soon as the fielding restrictions were lifted and dismissed Kishan (29) and Suryakumar Yadav (0) in the same over. An over later, the left-arm spinner got rid of Rishabh Pant also, leaving India at 83 for three in the ninth over.

However, Sharma continued his assault from one end to bring up his 26th T20I fifty, his second on the trot. But Ish Sodhi's reactive catch meant that his innings came to an end for 56 off 31 balls. Venkatesh and Shreyas Iyer then kept the scorecard moving, with the former targeting the leggie Sodhi.

However, just when India seemed to lose steam before the death overs in the form of Venkatesh (20) and Shreyas' (25) wickets, Harshal and Chahar used the long handle to good effect. The former hit 18 off just 11 balls while the latter's cameo of 21 off just eight balls, including 19 runs of the final over meant India posted a match-winning total.