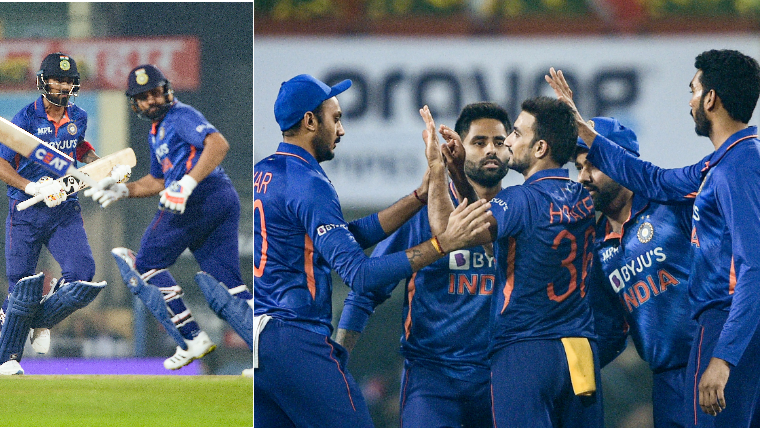 Harshal Patel has been plying his trade in the domestic circuit for over a decade now. He's played nine seasons in the Indian Premier League (IPL) and represented Royal Challengers Bangalore (RCB) from 2012 to 2017, went to Delhi Daredevils (Capitals now) in 2018 before returning to RCB in 2019. But it took a 32-wicket season in the IPL for Harshal to get noticed by the selectors and be picked for the national side.

Harshal had to wait a game before he was handed his T20I debut on Friday, where he had a major say in the proceedings. The right-arm seamer picked up two wickets in the second T20I against New Zealand to restrict them to a lowly 153 for six, which India overhauled without much ado, registering an seven-wicket win in Ranchi to seal the three-match series with a game to spare.

Rohit Sharma and KL Rahul then struck their fourth hundred-run partnership in T20Is - their fifth successive stand of fifty or more - to ensure India's passage to a win was an easy one.

It was like facing baptism by fire for Harshal, who was brought into the attack in the seventh over, after New Zealand were put in. The Kiwis had rollicked to 64 for one in the powerplay, thanks to Martin Guptill. The right-hand batter planned a calculated assault on India's new ball bowlers in Bhuvneshwar Kumar and Deepak Chahar. Guptill scored 31 off just 15 balls - overtaking Virat Kohli to become the leading run-scorer in men's T20Is - hitting three fours and two sixes before Chahar's short ball consumed him.

Harshal bowled a quiet first over after which, Daryl Mitchell and Mark Chapman, who equalled his T20I best in the first T20I, tried to keep the momentum. However, Axar Patel had Chapman (21) holing out to long-off before Glenn Phillips was dropped in his next over.

Harshal then got his maiden scalp in the form of Mitchell's wicket - the change of pace making the Kiwi hit one down straight down long on's throat.

Tim Seifert and Phillips then tried to arrest the slide and kept New Zealand progressing, with the latter first hitting Axar for a four before slamming Chahar for half a dozen over square leg. He also hit Kumar for a six back over his head.

Ravichandran Ashwin, who has been quite consistent ever since he's returned to the T20I side, got Seifert after an attempted reverse sweep went wrong. Harshal then got his second in Phillips, having him pull a slow, short ball straight down deep square leg's throat after being hit for a six earlier in the over.

The Black Caps then struggled to get the ball away, finishing the last three overs boundary-less to merely cross 150.

Sharma and Rahul then began steadily before turning up the heat after the ninth over. India scored 53 runs in the next four overs, with Rahul bringing up his 16th T20I half century. After Rahul fell, Sharma took the onus and brought up his 25th half ton in the format before a soft dismissal.