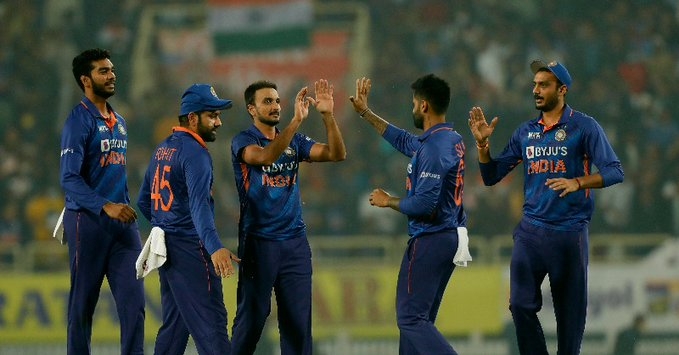 Harshal Patel had a memorable start to his international career as he returned two wickets for just 25 runs, which helped India restrict New Zealand to 153 for six in the second T20I in Ranchi on Friday.

The trio of Patel, Bhuvneshwar Kumar and Deepak Chahar kept the Kiwi batters under check as the visitors managed to score just 15 runs from the last three overs. This after Axar Patel and R Ashwin had put the brakes on the attacking display by the New Zealand batters.

While Glenn Phillips top-scored for New Zealand with 34, openers Martin Guptill and Daryl Mitchell hit 31 apiece. Guptill in fact surpassed Virat Kohli during his innings to become the highest run-getter in Men's T20Is.

Put in to bat first, the visitors enjoyed a terrific start as their score read 64 for one after the end of the first powerplay. Guptill (31 off 15 balls) looked dangerous and was playing a feisty knock before Chahar got the better of him in the fifth over.

In the middle overs, the Indian bowlers came back strongly as they were able to control the flow of the match, thanks to Ashwin and Axar. With runs in scarcity, Kiwi batters went for big shots, and amid that Mark Chapman got caught by KL Rahul at mid-off off Axar in the 9th over. Halfway into the innings, the visitors' score read 84 for two.

Things got difficult for the Black Caps after Harshal sent back Daryl Mitchell into the dressing room in the 12th over of the innings. Tim Seifert then joined Glenn Phillips on the pitch and steadied the ship for New Zealand.

However, the stand didn't last long as Ashwin found himself among the wickets in the 16th over. The veteran Indian spinner removed Tim Seifert on 13.

Patel struck in next over to remove dangerous-looking Phillips as Kiwis got under more pressure. Wickets kept falling for the visitors as Kumar sent back Jimmy Neesham to the dugout in the 18th over. After that, it was all scoring as many as the Kiwi lower-order could.