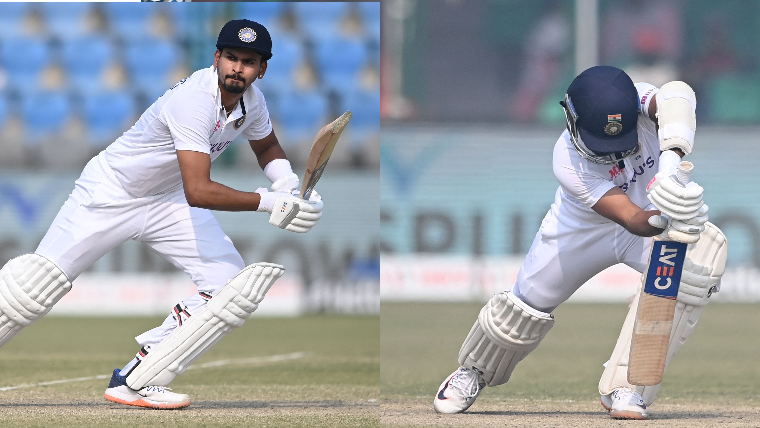 Shreyas Iyer (l) and Ajinkya Rahane have had contrasting times with the bat for India in the Kanpur Test. | Photo: AFP

It was the same old story again on Day 4 of the first Test between India and New Zealand in Kanpur on Sunday, when the hosts were reeling at five for 51, a lead of just 100, before Shreyas Iyer’s rescue act helped them recover. The contribution of Iyer and the lower order helped India get to 234 and declare, to set New Zealand an improbable 284 to win.

The cumulative batting average of numbers three, four and five for India in Tests from January 2020 is 28.50. Only West Indies have fared worse. During this period, India have had eight players batting at these three spots with Cheteshwar Pujara, Virat Kohli and Ajinkya Rahane having most games at the respective spots. Their averages in the phase? 27.92, 26.80 and 28.18 respectively.

Of the three, Rahane has the least number of fifty-plus scores. In 12 Tests in 2021, the Mumbai batter averages 19.57; only former England batter Allan Lamb averaged worse after playing 12 or more matches in the top six in a calendar year - 19.33.

List of players with century and fifty-plus on Test debut:

Hence, Iyer’s entry in Test cricket comes as a breath of fresh air, as a result. Batting at five on debut, the 26-year-old scored a ton on debut in the first innings and followed it up with 65 on the penultimate day of the Test. With Pujara (22) strangled down leg by a yet-again-impressive Kyle Jamieson, and Rahane (four) being trapped LBW by Ajaz Patel, Iyer found company in Ravichandran Ashwin.

Tim Southee, who was on a roll after dismissing both Mayank Agarwal and Ravindra Jadeja in a space of three balls, was made to seem pedestrian by Ashwin, who got going with some delectable drives. Though Jamieson got the better of Ashwin on 32, Iyer and Wriddhiman Saha then added another 64.

Iyer’s patience and choice of strokes stood out despite the Kiwi seamers being relentless. He, thus, became the first from India to score a ton and a fifty on Test debut. His efforts were attested by batting coach Vikram Rathour, who said, “It's always exciting when a debutant comes and scores a hundred. It's very special and I thought he looked even better in the second innings.”

After Iyer fell, Saha and Axar Patel added an unbroken 67 before India declared. Saha, who was battling stiff neck, put up a gritty, spirited show in the middle. He was tested by Jamieson and Southee, who varied their lengths and had him hopping and swaying. Yet, Saha stay put and brought up his first Test fifty since August 2017, leading India to safety.

While India will expect to bundle New Zealand out on Day 5, a selection call will present itself ahead of the next game, with captain Virat Kohli returning. With 170 runs in the Test, it should be fairly certain that Iyer’s name should be first on the list for the Mumbai Test.

Like it was at the start of the series, the spotlight will be yet again on Pujara and Rahane. Rahane may well help India win the Test on Monday. But he and the whole of India would know, that alone wouldn’t be enough.