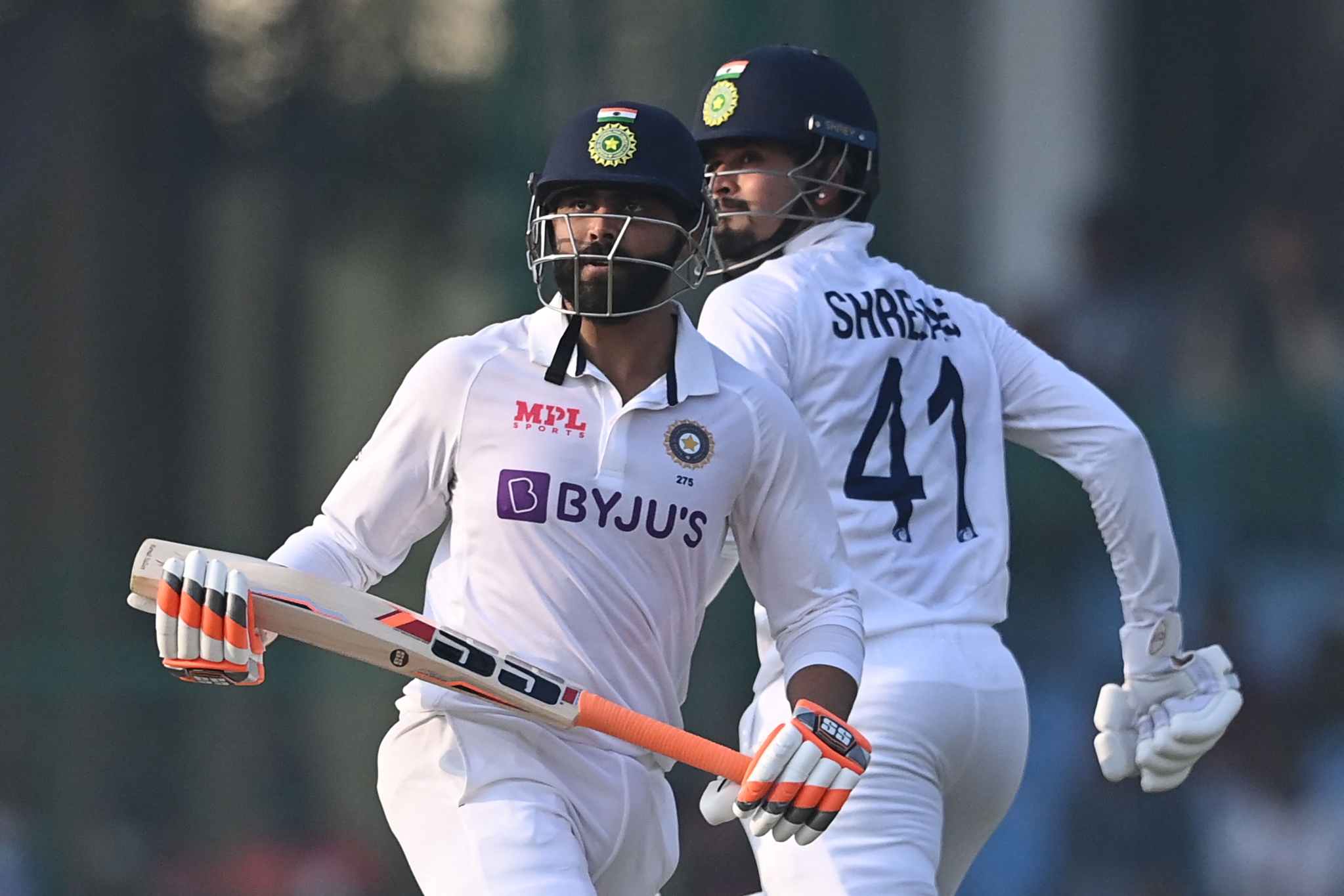 Ravindra Jadeja (l) and Shreyas Iyer during their partnership for India. | Photo: AFP

Fifties from Shubman Gill, Shreyas Iyer and Ravindra Jadeja helped India to 258 for four on Day 1 of the first Test between India and New Zealand at the Green Park in Kanpur on Thursday. For New Zealand, Kyle Jamieson was the pick of the bowlers, returning three wickets for 47.

Iyer and Jadeja finished the day with an unconquered 113-run partnership, after getting together at four for 145 when captain Ajinkya Rahane was dismissed. Iyer, on debut, played smartly, against pace and spin. He tackled Jamieson's change of lines and lengths expertly while also tackling the swing of Tim Southee.

Jadeja also got among the runs pretty quickly, hitting a four off Jamieson to get going. Walking in at number six, the all-rounder was quite adept at playing the tall lanky pacer, who has troubled India in the Tests so far. He also looked at ease against the three spinners Ajaz Patel, William Somerville and Rachin Ravindra.

Iyer got to his fifty off 94 balls while Jadeja got to his off 99 balls as they ensured New Zealand ended the final session of the day wicketless.

Earlier, opting to bat first, India lost Mayank Agarwal (13) early, thanks to relentless lines bowled by Jamieson at the start. The Kiwi pacer first pushed Agarwal on the back foot, before having him feel outside off stump, before having him caught behind.

Young Gill and Cheteshwar Pujara then saw off the first session unscathed. Gill was particularly harsh on Patel, hitting him for a six after dancing down the track. Pujara, meanwhile, was happy to use his feet against the tweakers. However, Gill, who finished his fourth half century before Lunch, was soon dismissed for 52 on resumption, when he played one on off Jamieson.

Pujara soon fell caught behind to fall prey to Southee's disciplined bowling. Rahane and Iyer then added 41 together before the captain was out for 35 after he got a bottom edge on to the stumps of a Jamieson ball, that bounced less than he expected on a slow track in Kanpur.