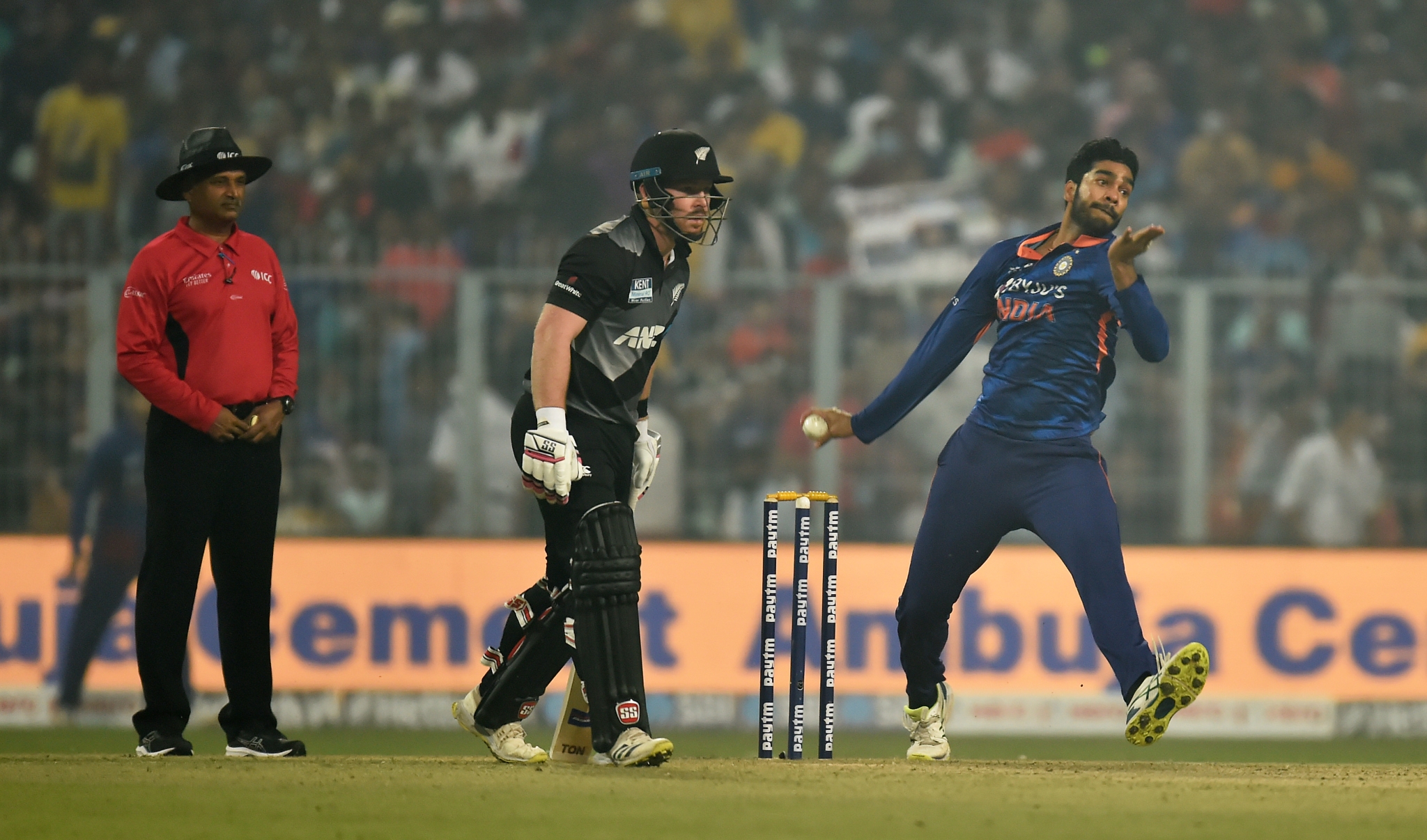 Venkatesh Iyer (r) in action with the ball for India against New Zealand. | Photo: Twitter

Venkatesh Iyer finally got a taste of bowling in international cricket in the final T20I between India and New Zealand at the Eden Gardens on Sunday. Having made his international debut in the T20I in Jaipur, the much-anticipated bowling time didn't come in the first two games, both of which India won.

With the Kiwis struggling at three for 37 after the Powerplay and a Martin Guptill in a marauding mood in Kolkata, Iyer was handed the ball. A quiet over for four runs.

By the time he was brought back for his second over, New Zealand had lost Guptill and were well behind the eight-ball. Varying his length and pace continuously, Iyer made shot-making difficult for the Kiwis. But the last ball of that over stood out.

Running in from round the wicket, Iyer nailed the yorker perfectly, catching Mitchell Santner by surprise. The stand-in New Zealand captain tried digging it out but only got the toe end of his bat to the wicket-keeper. Not a wicket, but a ball that made you sit up and take notice of Iyer, the bowler.

Playing for Kolkata Knight Riders (KKR), Iyer picked up a couple of wickets against Delhi Capitals in the group game in Sharjah. He admitted to practicing bowling yorkers with his bowling coach Anand Rajan, who played for Madhya Pradesh between 2005 and 2014 and is currently employed with the Indian Oil Corporation Limited.

“When Venkatesh was 18 or 19 years old, I suggested he take up bowling. He used to wicket-keep in club cricket earlier. I felt that with his height he could easily extract bounce by bowling even on a length," Rajan, who played in the IPL for Deccan Chargers and Sunrisers Hyderabad, told the Free Press Journal in a telephonic chat. Having known Iyer and his family for over a decade, Rajan knew the lanky cricketer would pay heed.

“When he started playing for Madhya Pradesh Under-22, he was scoring runs — in the 50s and 60s. It wasn't enough for him to get into the senior side. Then we started working on his bowling a lot.”

The secret to one’s personal growth is helping others succeed and grow ,Period !!

Rajan, 34, had been with the MRF Pace Academy from 2004 to 2009, first under Dennis Lillee and then under Glenn McGrath. As a result, he could help Iyer with the basic technical changes in his action, too.

“I saw him as a shorter format player — not that he can’t play Ranji and longer formats. But our primary focus was to get into the limited overs side of the MP team first," adds Rajan, who is thankful to IOCL for allowing him to work with players like Iyer.

“He started getting confidence in his bowling, then he started bowling in the longer format too.”

Iyer has seven wickets in ten First Class games and 41 in the 83 limited overs matches, including the three T20Is. He bowled 15 overs in the five matches of the Syed Mushtaq Ali Trophy (SMAT) 2021-22.

By the time the first half of IPL 2021 came to a halt due to coronavirus cases in the bio-bubble, Iyer hadn’t made his debut in the league.

“We thought he wouldn’t get to play the entire second half and only get two-three matches at the end, where he will have to do well so that next year ke liye acha ho jayega (it will be good for the next year),” states Rajan.

“If you’re batting at five and six in the IPL, you'll get a few balls or two-three overs at the most. So why limit the options?” 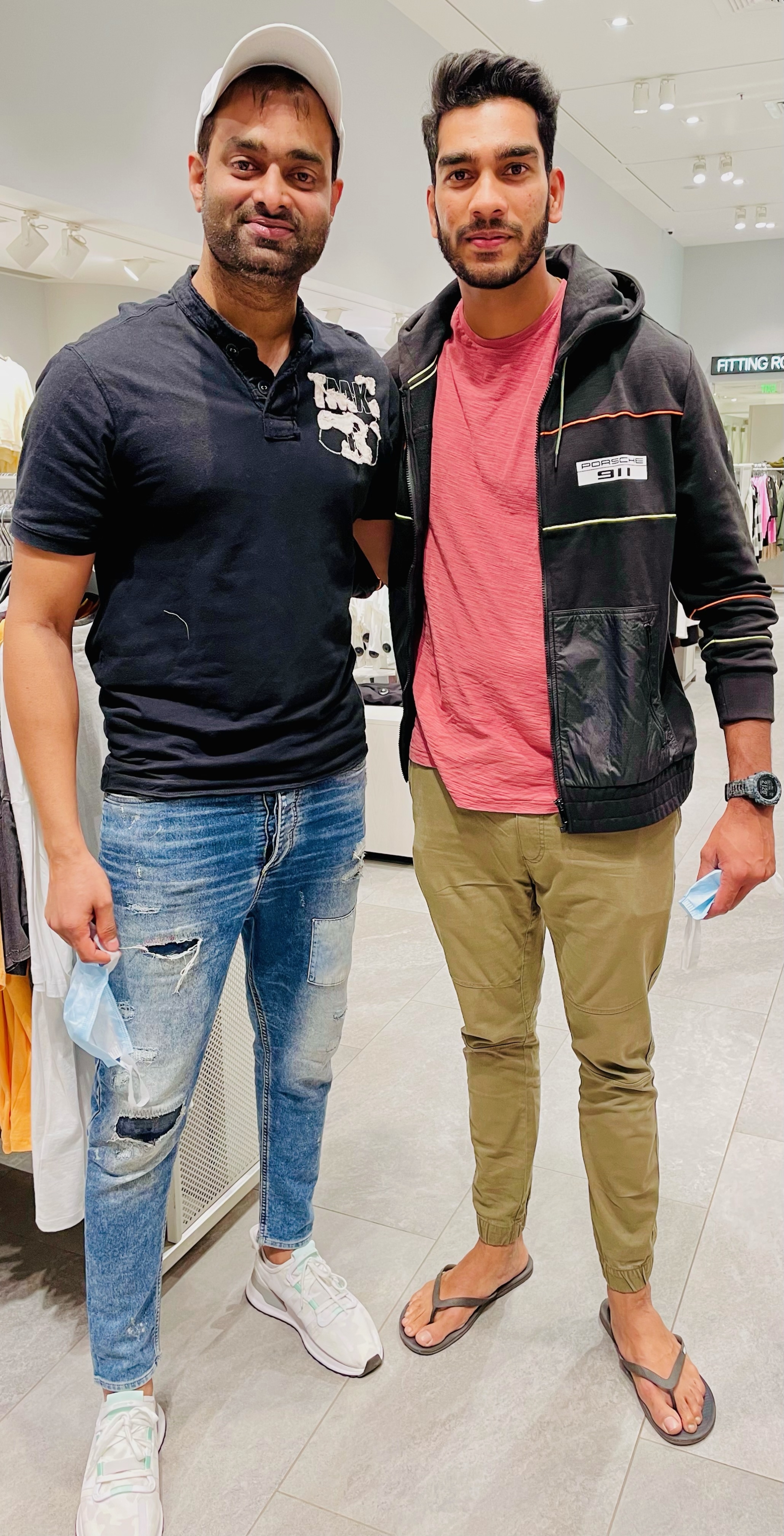 Whatever Iyer worked during the sessions with Rajan was put to use in the SMAT, where he returned five wickets at an economy under six runs-an-over.

‘Aim at the base of the middle stump’ was Rajan’s mantra for practicing yorkers, which Iyer did. Given that the second leg of the IPL 2021 was in UAE, he worked on having the slower ball “with the same action” in his repertoire.

Result? Three wickets in the four games Iyer bowled in for KKR.

“The plan is to keep him in the mix as much as we can,” Rohit Sharma said after the third T20I about Iyer. “At the same, we need to give him a role of where to bat.”

Iyer used to bat in the lower middle-order for MP before head coach Chandrakant Pandit pushed him to open. The move enabled the team to get flying starts and for Iyer to own the spot for KKR in the UAE leg. The experience of batting at the top as well as finishing the innings will keep him in good stead.

Iyer got a big thumbs up in terms of his bowling, when Sharma said, "He was clear in his mindset and had a good approach for whatever he wanted to do. He looks like a very bright prospect for us. In terms of his bowling skills as well he can get the job done for us. It's about giving him that confidence, making him play as much as he can and seeing if he can deliver for us."

With confidence by his side and the backing of the men who matter, Iyer, the all-rounder, has surely taken flight.