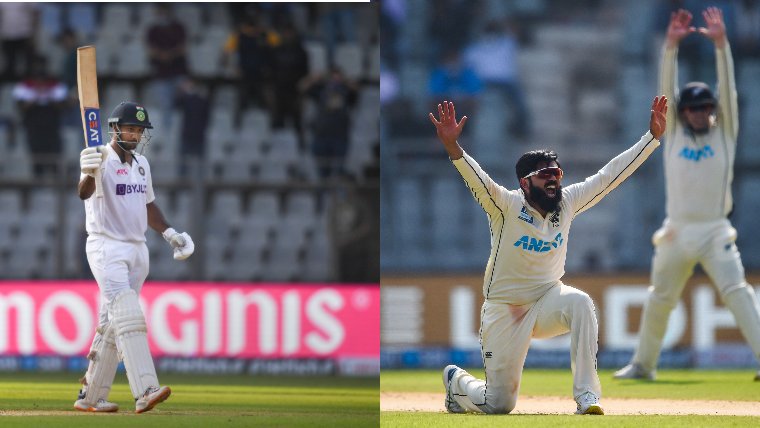 Mayank Agarwal (l) of India celebrates after a milestone while Ajaz Patel appeals for a wicket. | Photo: PTI/AFP

Mumbai is known as a city that never sleeps. A delayed start to the second Test on Friday, due to a wet outfield, meant that the sparse crowd did not have much to cheer. A sedate start at noon after India opted to bat brought very little smile to the spectators’ faces. The chants were decreasing in decibel. The Wankhede Stadium had gone into a slumber.

Ajar Patel’s triple strikes in the post-Lunch session shook everybody awake, infusing life into the game. Dead track? Tall score? Batters’ paradise? Hell, no! And later, Mayank Agarwal, with his wide array of strokes, ensured that the energy and interest levels were up as India ended Day 1 on 221 for four.

A hit on the head ahead of the Tests meant that Mayank Agarwal didn’t open for India in England. With Rohit Sharma and KL Rahul, who formed a pair at the top since then, out of the home Tests against New Zealand, Agarwal was given the chance. After the failures in the first Test, the 30-year-old’s batting average in his last ten Test innings read a mere 11.80. While Cheteshwar Pujara and Ajinkya Rahane were under pressure due to poor form, the axe was likely to fall on Agarwal.

However, with Rahane ruled out due to a hamstring niggle, Agarwal got his opportunity and made hay while the sun shone, literally.

He took a back seat when Shubman Gill was going at the start. In a partnership of 80, Agarwal scored just 32 and took his time. He did try to pull a couple of short ones off Patel that well short of deep mid-wicket. But India had a strong platform.

That moment when @mayankcricket got to his 4th Test Century 👏👏

Patel was born in Mumbai and felt at home in his first Test at the Wankhede. Brought as early as in the eighth over, the left-arm spinner got good purchase from the track. He got one to spin in the very first over, with Agarwal trying a pull. Using his guile, he deceived Gill, only for wicket-keeper Tom Blundell to fluff the stumping. However, on the very next ball, Gill offered a simple chance to slip on 44. Patel was up and running!

In his next over, he used flight to four flush Pujara, who charged down only to miss the bowl, york himself and be bowled for a five-ball duck. More glee was to follow four balls later when he trapped Kohli right in front. Four-ball duck and a bit of controversy for the Indian captain on return.

But Patel wasn’t complaining. The Mumbai-born New Zealander was running through the home team in Mumbai. “It is kind of what dreams are made of – to be here and to go out there and pick four wickets,” he would say after the day. His fourth scalp was the impressive Shreyas Iyer, with the bounce at the Wankhede coming to Patel’s aid.

At 160 for four, another opportunity for a tall Indian score seemed to go abegging.

FOUR now for @AjazP! Iyer onto his pad and Tom Blundell takes the catch and he's out for 18. 160/4 in Mumbai. Agarwal joined by Saha. LIVE scoring | https://t.co/tKeqyLOL9D #INDvNZ pic.twitter.com/TyQAHIxGiH

Agarwal stood tall when it mattered, literally. Former India opener Sunil Gavaskar asked him to keep his bat low at the start of the innings. “I have a tendency to hold it high. I couldn’t make that adjustment in this short period of time. When he was saying, I noticed his shoulder position and basically picked up that I need to be more side on,” he said about his technical changes.

He took spinners on, charging down and hitting three sixes. He looked assured against Tim Southee and Kyle Jamieson, both of whom troubled him in the first Test.

Agarwal’s assessment was pretty simple, “This innings was more about grit and determination, just to stick with the plan, be disciplined. I know I didn’t look good sometimes but I got the job done.”

A crisp cover drive off Daryl Mitchell, who’d replaced Kane Williamson in the XI, meant that a fourth ton in Test cricket was reached. Emotions ran as high as his jump after reaching the milestone. It was his first in the format since 2019.

Agarwal’s 120 not out would mean India sleep well. In a week where Parag Agrawal was appointed CEO of Twitter, another Agarwal shone when it mattered. On a different field altogether.

It was a week of Agarwals, indeed.