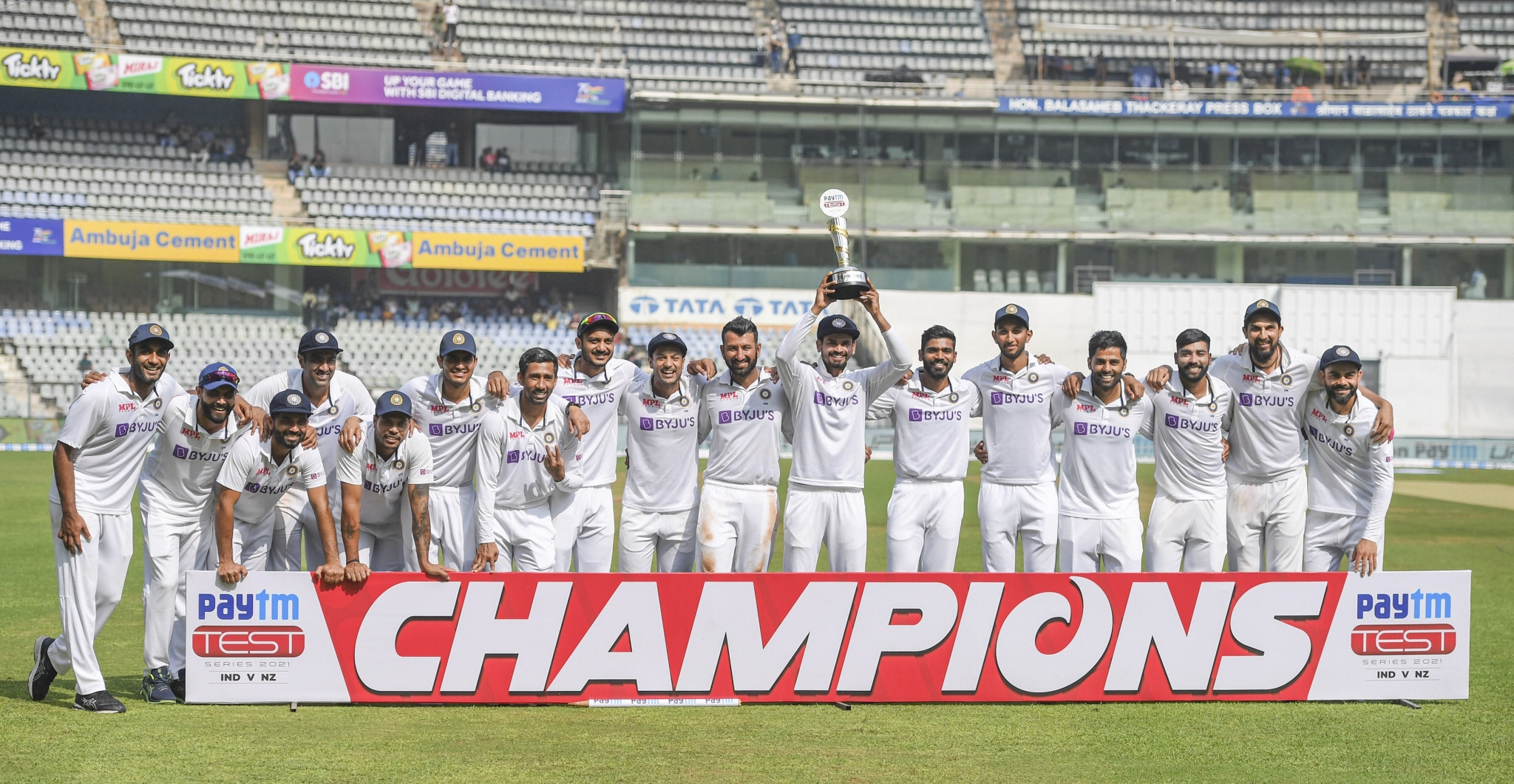 India were dismissed for 325. They had lost their last four wickets for a mere 43 runs. The pitch was good for batting, the sun was shining bright – in short perfect conditions for batting.

But Mohammed Siraj ran in and banged a short ball, which Tom Latham pulled straight to a precisely placed fine leg. This was just four balls after snaffling Will Young with a jaffa. The crowd roared along with Siraj in celebration.

As Jayant Yadav ran through the New Zealand middle and lower order on Day 4 of the second Test at the Wankhede Stadium, India’s bowling riches only become clearer. New Zealand lost their last five wickets in just 43 minutes on the penultimate day, succumbing to their biggest Test defeat. It also meant India won their 14th successive Test series win at home.

Siraj’s rise has been phenomenal to say the least. Handed a Test cap in Australia, he caused acute discomfort to the batters Down Under before tormenting England at their home with high pace and swing. On flatter tracks at home, too, Siraj has used angled and pace to good effect and averages 16.66 in the three matches so far.

“He has come a long way. He has a lot of skill and talent. That’s a special thing to have when the pitches are tough and wickets are not falling… he can bowl three-four tight overs and do something for us,” said India captain Virat Kohli, heaping praise on the speedster after wrapping up a 372-run win on Monday.

If India had one thing amiss in the first Test in Kanpur, it perhaps was an X-factor like Siraj.

“He doesn’t really bank on conditions, he has a lot of skill and he banks on that instead,” Kohli added. He can make important breakthroughs. He’s in the best headspace as a bowl. Now, it’s about staying there and staying fit.”

It only adds to India’s pace-bowling riches that comprises Jasprit Bumrah, Ishant Sharma, Mohammed Shami and Umesh Yadav among others.

Jayant, on the other hand, played his first Test since 2016, when India last played a Test at the Wankhede Stadium. He had scored a century in that game and returned his career-best this time with four for 49 in New Zealand’s second innings. To say the least, Jayant was the fourth spinner in India’s squad for the series.

Ravichandran Ashwin, who became the second Indian to pick 300 Test wickets at home after Anil Kumble, leads the charge with Ravindra Jadeja and Axar Patel for company. Overseas, India have tended to prefer Jadeja over Ashwin.

So strong is India’s bowling that it makes up, in many ways, for their weaker suit – batting.

India’s middle order – numbers three to six – averages 29.43 in Tests this year, which is the second lowest after West Indies’ 29.43. Save for Rishabh Pant’s 101 against England in Ahmedabad and Shreyas Iyer’s 105 on debut, there is no other ton by the middle order this year. The bowling has done well to bail India out after lows – case in point being series win in Australia after a record low of 36 all out and then taking the lead in England after being dismissed for 78.

A series win over the world champs ! Feels great to win a test at the Wankhede always. 👌👌A fab innings by @mayankcricket and great bowling performance by @AjazP . A special thanks to the @NorthStandGang for their support through the game 👏👏 pic.twitter.com/NbgJZUnwHz

That has to a great extent helped Ajinkya Rahane keep his place in the XI despite averaging only 19.57 in 2021. He’s received backing of Kohli, coach Rahul Dravid and all the support staff, who at various points have said that Rahane is “one big innings” away from regaining his form. The incumbent vice-captain in Tests might not even have that tag, in case he is on the flight to South Africa.

“We need to back them in these moments, especially when they have done well in the past. We don’t have this environment where we have our players asking ‘what happens now?’. That’s not how we do it in the side. We don’t react to criticisms or praise, whatever happens outside doesn’t affect us,” reiterated Kohli.

“We support everybody in the side, Ajinkya or anyone. We don’t take decisions based on what happens outside.”

Of the 37 wickets in the Mumbai Test, 33 were picked by a spinner and one was a run out. The three wickets to pace were all by Siraj. If India are to conquer South Africa, just a thank you note to the bowlers won’t suffice.

Thanks for hosting us, India.