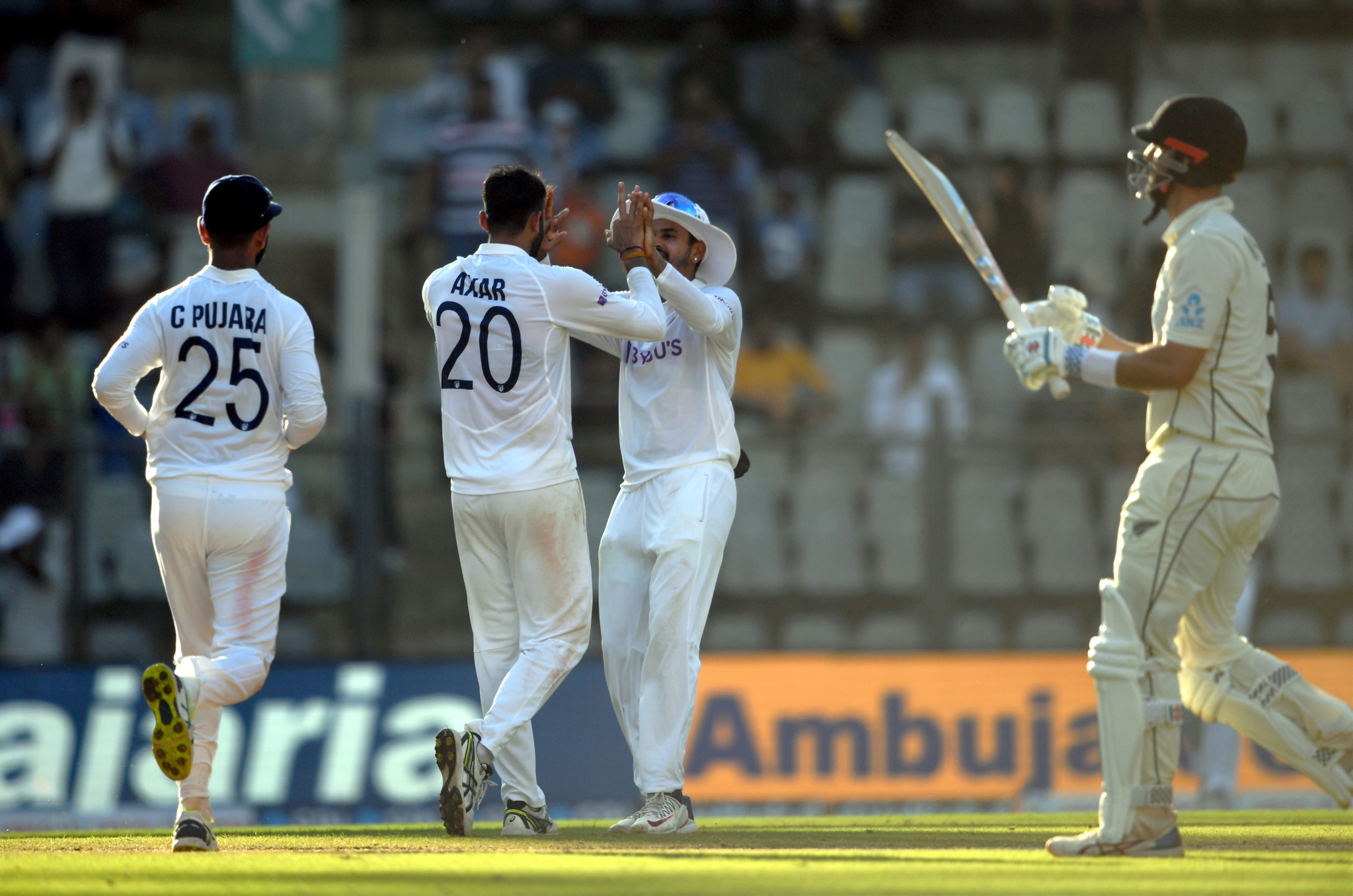 Axar Patel would be third in the pecking order if India have to play three spinners. He would be third again, if India are to set a preference in the batting among him, Ravindra Jadeja and Ravichandran Ashwin. He might, for all you know, not even be on the plane to South Africa for the three-match Test series starting December 26.

But on the third day of the second Test match on Sunday, Axar made his presence felt yet again. He first smashed an unbeaten 41 off just 26 balls, hitting four mighty sixes before breaking a stubborn partnership in New Zealand’s second innings, dismissing Daryl Mitchell for 60.

The New Zealand number three earned the applause of a noisy Wankhede crowd when he struck his second half century in Tests. He had walked in to bat in the fifth over and first steadied the innings with Will Young before frustrating India with a partnership with Henry Nicholls. They added 73 together; it seemed the Kiwis would live to fight strongly another day.

“Kal se office jaana hai, out kar, out kar (we have to go to work from tomorrow, dismiss them)!” was the chant when Axar was brought in to the attack.

A rush of blood from Mitchell, who tried to hit back-to-back sixes, meant Axar delivered.

Before Axar, the other Patel that had major presence in the Test was Ajaz. He added four more wickets in the second innings to go with his record ten in the first. His 14 wickets are the most any bowler has picked against India in Tests. Ajaz dismissed the overnight batters, Mayank Agarwal and Cheteshwar Pujara to continue his monopoly in the New Zealand bowling card.

Agarwal made a half century to go with his 150 in the first dig while Pujara narrowly missed out a half century after batting patiently and wearing a few Tim Southee-bouncers on the body. A big score eluded him.

Shubman Gill, batting at three, had an unorthodox way to tackle the bouncers from Southee and Kyle Jamieson. He made room to play the pull through mid-wicket, jumped while connecting the smash through mid-off and made his way to 47. It featured a massive six off an off-colour William Somerville, too.

But Rachin Ravindra managed to see the back of Gill for 47 and soon followed it up with captain Virat Kohli’s scalp for 38. A good first two wickets to have in one’s CV. It was the first time a bowler not named Ajaz Patel picked a wicket for New Zealand in the Test

“It was pretty funny because we thought he was going to take all 20,” Ravindra quipped after the day’s play. “They congratulated me for taking my first wicket. That first wicket was very special.”

Axar’s cameo then helped India swiftly move towards declaration, setting New Zealand a target of 540. It also ensured that the talks about Indian middle order’s lack of big scores was pushed for later.

While Axar had only one wicket to show at the end of Day Three, Ashwin picked three in a miserly spell where he gave away runs at just above one and a half runs per over. But Henry Nicholls is still in the middle on 36 along with Ravindra, who had helped the Kiwis stave defeat in the first Test.

“Take it ball by ball and maybe do something special,” will be Ravindra’s mantra yet again.