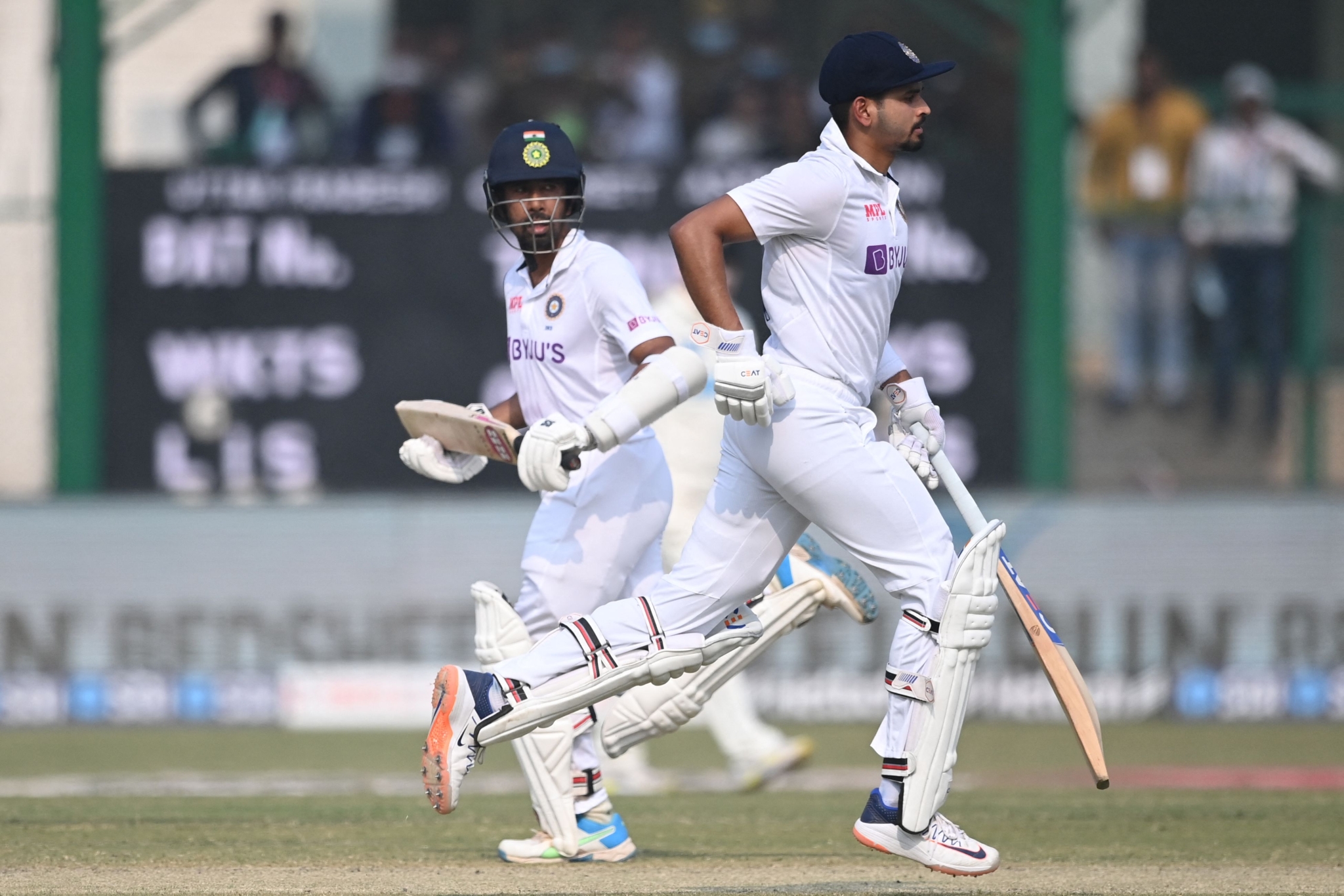 Wriddhiman Saha (l) and Shreyas Iyer run a single during their partnership for India against New Zealand. | Photo: AFP

Half centuries from Shreyas Iyer and Wriddhiman Saha helped India set New Zealand a target of 284 on Day 4 of the first Test in Kanpur on Sunday. Ravichandran Ashwin then dismissed Kiwi opener Will Young early to peg them back.

The highest ever fourth innings chase by a visiting team in India is 276 by Viv Richards' West Indies against the Dilip Vengsarkar-led India in 1987 at the Feroz Shah Kotla, which placed statistics on the home team's side.

The honours for India on the day were shared by Iyer (65 off 125 balls), who became the first Indian to score a hundred and fifty on debut and the plucky Saha (61 not out, 126 balls), who battled stiff neck to make an invaluable contribution which will certainly count a lot in the final context of the match.

Axar Patel (28 not out) then conjured another 67-run eighth-wicket stand with Saha to slowly take the match out of the Black Caps' grasp.

If New Zealand are still in the match, credit must go to their tireless seam bowling duo of Tim Southee (22-2-75-3) and Kyle Jamieson (17-6-40-3), who showed an exhibition of top class bowling on an unresponsive track.

However, it will now depend on how much time it takes for India's spin troika to roll over New Zealand, whose openers showed a lot of gumption on the second afternoon and third morning.

Also if skipper Williamson can do something mind-blowing with the willow, there might just be a great contest on the cards.

If the morning belonged to New Zealand's bowlers, who decided to prolong Cheteshwar Pujara and Ajinkya Rahane's bad patch, the afternoon was Iyer's time under the sun while Saha did his bit, reaching his sixth half-century in the final session of the day.

This is certainly an innings which will give Saha's Test career a new lease of life.

This was after stand-in captain Rahane and his temporary deputy Pujara's saga of failures continued leaving India tottering at 51 for 5 in the first 75 minutes of the morning session.

But credit to Iyer, who once again displayed steely temperament on the way to his second 50-plus score in the match, hitting eight fours and a huge six over long off against Will Somerville. His best shot, however, was an inside out lofted drive off left-arm spinner Ajaz Patel. It was a difficult shot that was perfectly executed.

It was followed by a square cut in the same over as Williamson erred by bowling his spinners for way too long.

That was proved when Southee removed Iyer at the stroke of tea when he tried to pull one that was drifting down leg side.

Credit should also be given to Saha as he batted with an open-chested stance compared to his usual side-on which reduces the pronounced neck movement. He played his customary game of dabs and flicks and also produced an occasional slog pull for six as his innings had four fours and a six.

However, on the fourth morning, Southee, a practitioner of conventional swing bowling, took a master-class on how to bowl on an unresponsive Indian track, classically setting up the batters.

But before Southee got into the act, Kyle Jamieson (13-6-26-3) targeted Pujara's (22 off 33 balls) ribcage, getting one to rear up on this dead track and it brushed the India No. 3's gloves into the hands of keeper Tom Blundell.

Rahane (4 off 15 balls) is out of form and the world knows about that. However, Ajaz Patel (17-3-60-1), who has looked way below Test class, then produced his best delivery of the match.

An arm ball that was fired in with the angle caught Rahane plumb in-front while he tried to play a forward defensive prod.

Mayank Agarwal (17) did all the hard-work in the first hour but Southee (15.2-3-48-3) set him up with deliveries that came into him from good length spot as he played with a closed bat-face.

Then he pitched on the same spot and, to Agarwal's horror, it shaped slightly away and he had committed to a closed bat-face.

The result was a regulation catch to Tom Latham in the second slip.

For Ravindra Jadeja (0), Southee used the width of the crease with an angular delivery that wrapped him on the pads.