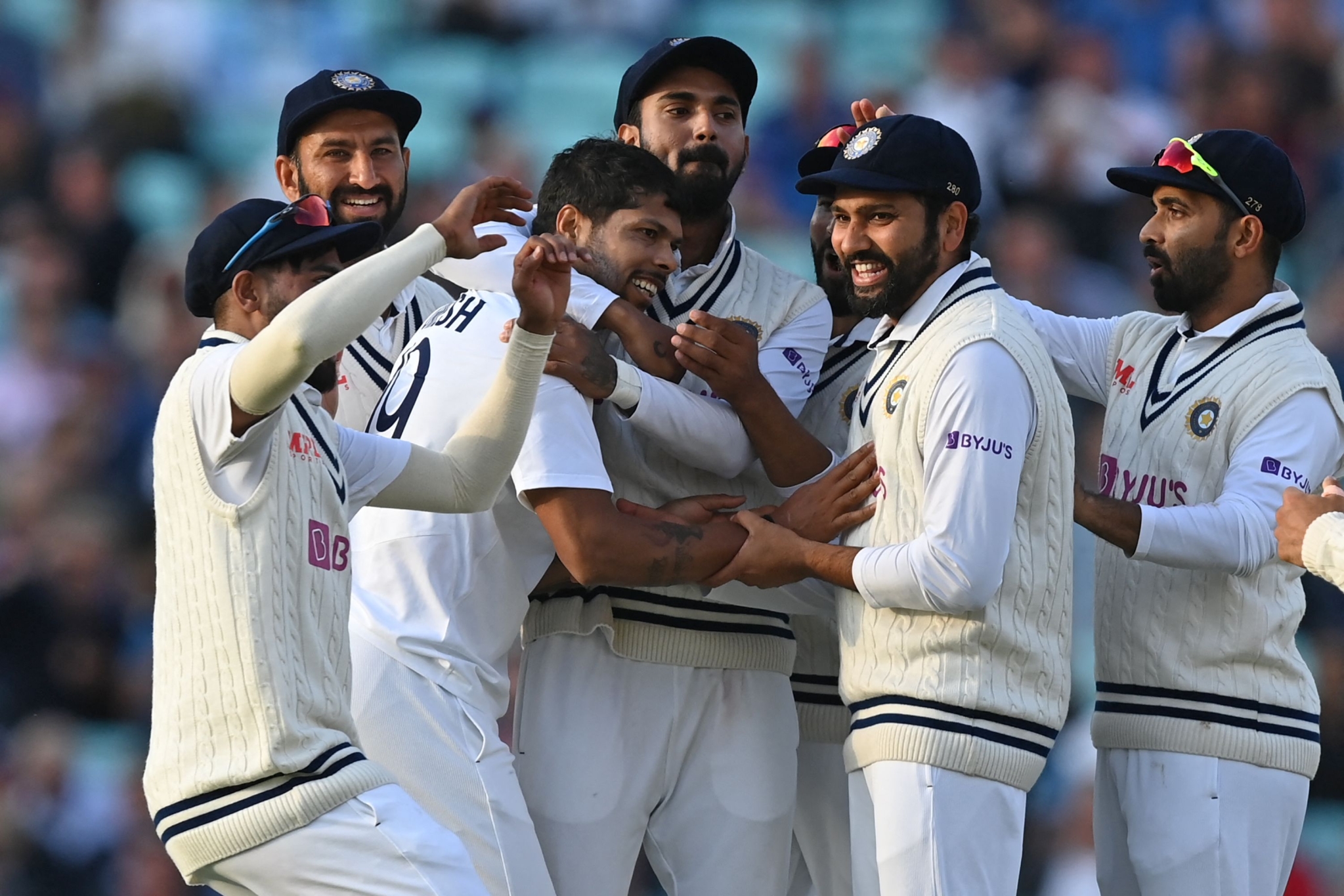 India's Umesh Yadav (C) celebrates with teammates after bowling Englands captain Joe Root for 21 runs during play on the first day of the fourth cricket Test match between England and India at the Oval cricket ground in London on September 2, 2021. | (Photo by DANIEL LEAL-OLIVAS / AFP)

London [UK]: India might have been bundled out for 191 in the first innings, but Jasprit Bumrah dismissed England's openers Rory Burns and Haseeb Hameed to end scintillating Day 1 of the ongoing fourth Test here at the Kennington Oval on Thursday.

After bundling out India for 191, England got off to a bad start as openers Rory Burns (5) and Haseeb Hameed (0) were sent back to the pavilion in the fourth over by Jasprit Bumrah. On the cusp of stumps, Umesh Yadav got the big fish as he clean bowled England captain Joe Root (21) and the hosts were reduced to 52/3. In the end, Malan and Overton ensured that England does not lose more wickets before stumps.

Earlier, Shardul Thakur might have played a knock of 57 runs, but Chris Woakes four-wicket haul helped England bundle out India for 191. Ollie Robinson took three wickets while James Anderson and Craig Overton returned with one wicket each.

Resuming the third and final session at 122/6, India lost the wicket of Rishabh Pant (9) pretty early on as the left-handed batsman went for a big shot off the bowling of Chris Woakes, but he only managed to hand a simple catch to Moeen Ali. Shardul Thakur then joined hands with Umesh Yadav and the former played a counter-attacking inning and England was left searching for answers. Shardul brought up his half-century off just 31 balls in the 60th over and all of a sudden, India gained an upper hand.

Earlier, Ravindra Jadeja, Virat Kohli, and Ajinkya Rahane lost their wickets as England further tightened their grip in the second session. At the tea break, India's score read 122/6 with Rishabh Pant (4*) and Shardul Thakur (4*) unbeaten at the crease.

Resuming the second session at 54/3, Kohli and Jadeja added 15 more runs before Jadeja (10) was sent back to the pavilion by Chris Woakes. Jadeja poked at a delivery bowled outside off and he handed a simple catch to skipper Joe Root at first slip, reducing India to 69/4. Ajinkya Rahane then joined Kohli in the middle and the duo started reviving the innings for India. The Indian skipper brought up his half-century in the 40th over and he was looking set for a big one. However, as soon as he brought the landmark, Kohli (50) was sent back to the pavilion by Ollie Robinson.

Right before the tea break, Craig Overton removed Rahane (14), and India was reduced to 117/6. In the end, Pant and Thakur ensured that India does not lose more wickets before the tea interval. Earlier, India lost the wickets of Rohit Sharma, KL Rahul and Cheteshwar Pujara as England dominated the opening session. At lunch, India's score read 54/3 with Kohli (18*) and Ravindra Jadeja (2*) unbeaten at the crease. In the first session, 25 overs were bowled and the English bowlers made sure they repaid the faith shown by skipper Joe Root as he won the toss and decided to bowl.

Sent into bat, the Indian openers -- Rohit and Rahul -- mixed caution with aggression and the duo saw out the opening spells of James Anderson and Ollie Robinson. However, the introduction of Chris Woakes paid off straight away as he dismissed Rohit (11), ending the 28-run opening stand.

Pujara next joined Rahul in the middle and the duo found the going tough and they did not score a single run for almost five overs, and this eventually brought about a wicket, as Rahul (17) was trapped in front by Ollie Robinson, reducing India to 28/2. Pujara (4) also failed to leave a mark with the bat as he chased a wide delivery and his wicket was grabbed by James Anderson, reducing India to 39/3 in the 20th over. In the end, Kohli and Jadeja ensured that India went into the lunch break without losing any further wicket.